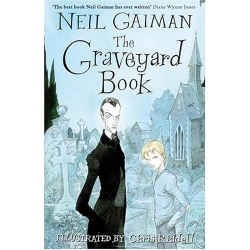 Gaiman is a wonderfully imaginative writer, full of dark flair. The premise in this book, has, through nefarious means, a young child losing his family. He is reared by a motley collections of ghosts who live by their graves in the local graveyard. There’s a whole collection of ….entities…who inhabit the world, our ordinary, living reality, and, various representative of other kinds of existence.

There’s a lot of humour in the book, quite a lot of sly education – the young reader will pick up snippets about history, medicine, literature, politics etc from the encounters the young hero makes. There’s also some delicate handling of deeper matter – hints at what lies just over the border of adolescence, also bullying, revenge, death and loss.

And, of course, there are the wonderful illustrations by Chris Riddell. Whatever the charms this book may have as an audio book, losing these beautiful illustrations at pertinent points of the story would be a huge, huge loss

Sadly (to my eyes) the American version uses a different illustrator, whose work appears to be blockier, heavier, cruder, and done with broad brush strokes, rather than the intricacy and fine detail which Riddell’s work, above, illustrates.

I guess Kindle readers won’t have a choice as downloads will depend on location, but I know I’d be prepared to scour the UK site for a paper copy of Riddell, if i had a choice – see the difference in the styles, with Dave McKean’s version below

Oh – and for those who chance upon this who don’t live in the UK – Being Human was a blackly comedic BBC series, involving a werewolf, a vampire and a ghost who set up house together and live within our ordinary society – so ordinary that the werewolf and the vampire in the first series work as hospital porters!

I personally lost interest after 3 of the 4 major characters left after the third series; it was a surprisingly good series, with excellent scripts and performers, and gained a cult following from all sorts of people, not just its target audience of young adults or late teens.  There was a later North American version of the series.