Revisiting, and as magical as remembered

A recent interview with Joan Baez at 78, on her ‘farewell tour’  sent me back to visit her first, heavily traditional, folk ballad albums. Hearing that pure, clear effortless voice again has been a wonderful mix of melancholy and delight. Melancholy (ah, all our youth, or whenever this was first heard) but, also the choice of songs. Most of them are ancient ancient and (I assume) carry the weight of some of the centuries they have been sung in. Many of them are about death, many about love : and still more for death and love entwined.

I have to say that listening to many of the stellar female chanteuses of today I find a curling disdainful lip curls around my ears (strange mixed image!) So many voices seem to over, sobbingly EMOTE. ‘Look how much I am FEELING – or are full of various fashionable wails and vocal tricks. I wish many of them would sit down and listen to just how much more feeling an interpretation can be which floats out the music, and lets it do the speaking. Joan sings simply and clearly, her vibrato seems to happen without force or strain.

I confess to listening to these old lays, full of women done wrong to, loved and left, (Mary Hamilton, a Child Ballade) or women who decided not to engage because they were bound to be loved-and-left (Silver Dagger), tales of death on the high seas, death in battle and they did strange things to me. Somehow her renditions seem to carry the memory of how others may have sung them over earlier generations.

Baez of course has also been an activist all her life. I find interesting that she was 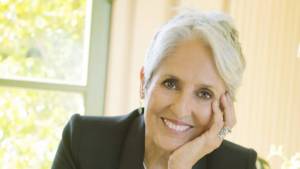 largely brought up a Quaker (both her mother and her father had been the children of ministers from other Christian traditions) That spirit of both social activism, egalitarianism and the absence of the need for a mediator between ‘the Word’ and the congregation are somehow linked with the music she engaged with. And so too is the reflective  listening  for the truth of the music and the words to express, so that the singer does not need to overdo her feeling for it. Here is another performer who allows the listener room.

Although knows as a fine interpreter of other people’s songs, as well as an interpreter of traditional music, she has also penned some fine songs herself Though not on this album which is all ‘traditional’ – composer and lyric writer unknown.

Sadly, this album does not seem available on the American site to buy as an MP3, and several of the reviews mention that the quality of the reissue pressing is not that well done