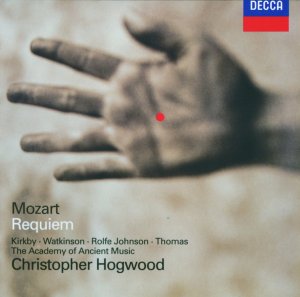 This is a beautiful rendition of The Requiem, the acoustics of Westminster Cathedral playing a major part in the creation of a spaciousness in the sound. There is also a shiny timbre with the use of period instruments.

It’s an elderly recording, dating from the 80’s and has been digitally remastered. There is a slight cavil I have, in that there is less dynamism and thrusting forward energy than with some other versions, but its swings and roundabouts really, because the quality of the soloists, particularly Emma Kirkby, is outstanding.

Kirkby’s pure soprano line rises and floats without strain, impossibly open and effortless. There is no fulsome vibrato, or density to her voice, just a quality of effortlessness, impossible, almost, to imagine produced from the solidity of flesh! The Tuba Mirum is a wonderful illustration of this, a dance and progression from the strong bone and earth of David Thomas’ bass and the vibrant brass to Kirkby’s ethereal tones, supported by that bone and earth, but escaping free into space.

What an extraordinary piece of music this is.

If you read some of the reviews on Amazon by serious musicologists there is a lot of erudition to be found about different versions of the music. Here, everything that is NOT Mozart (Sussmayr) is excised

And the Cello Itself Sprang to Life

I heard  Argentian cellist Sol Gabetta in concert, a while ago, and she is electrifying.

One of the pieces she played, a Beethoven work for piano and cello, familiar to me, I’d already heard, enjoyably, at another live concert, and with a different cellist. All I can say, with Gabetta, is that I felt that in fact, I’d never heard the piece before, because it suddenly made total sense in a way I hadn’t previously experienced. Cello and piano were having a conversation with each other which was fresh, dynamic and new. She brings warmth, vibrancy, intelligence, passion, great musicality and heart into her playing.

In the first piece, the Hofmann, at times the cello has a sweetness, shimmer and shine more commonly found in the violin. The Haydn sounds – young! There’s a freshness, a romantic lyricism to her rendition, a quality of innocence and joyousness. As at that live concert, listening to her is to smile, more and more with happiness that such music exists, and that someone can delight the listener afresh with it

This is a wonderful recording, Gabetta’s cello itself has a gorgeous, lush, rich, warm tone; she clearly loves her cello, loves the music her cello sings and I can almost believe that her particular cello is a sentient creature with soul!

The Mozart piece feels a little like an `album filler’, and is anyway a piece scored for the flute, here adapted for the cello. And it begs the question `why?’ If Mozart scored it for the flute, that is where it is meant to be heard, played by flautist and orchestra, not by cellist and orchestra. Perfectly pleasant but not as immediately grabbing this listener as the other pieces, which are specifically scored for the cello. However so lovely and right are the first two pieces that I can live with what seems like a less inspired programming choice for the third

Here is a You Tube video of Gabetta playing Haydn at incredibly fast lick – clearly the conductor had a train to catch, but she still manages to suffuse this listener with joy, despite wanting to shout whoa! slow down! to the man with the baton!

A later edit – I found a much more spacious You Tube rendition with Gabetta and Basel Orchestra, performing the Haydn in C Major in entirety. She, they and it are a delight!