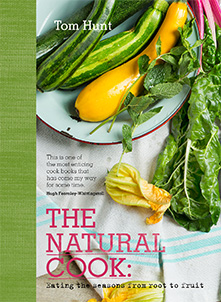 I’m not really quite sure why I failed to post this wonderful book on this blog,  given my enthusiastic review of it (after receiving it on Amazon Vine UK) on Amazon. I think I was a little restrictive in ‘what is this blog about’. As I fairly often review cookery books, why not? It was probably thinking I’d have to create another category, and the hard work that entails. My inner sloth protesteth! But this is too good a book to give way to that sloth………

Hunt’s mission is to help us save our money, save our time, delight our eyes, taste-buds and tums, at a price which doesn’t cost the earth for future generations.

Although this is not a vegetarian cookbook (which will probably delight many) the star performers here are players from the vegetable, rather than animal, kingdom.

Divided initially into four quarters, to mark the four seasons, Hunt picks a few plant ‘stars’ typical of the season, and then gives a good 8 to 10 recipes with that star player as main ingredient. He offers 2 methods of preparation for each, and then sundry recipes involving that method. Advice is also given on the storage of left-overs from each recipe and indeed where it would be advisable to make extra in order to have freezer food for later.

His aim is to reduce food waste to a minimum, so ways of using left-overs are also included, making them part of other dishes.

This is all high end, easy prep (for the most part) gourmet, healthy, delicious and stylish food – designed to make the cook and the diner feel equally good and delighted, without sacrificing hedonic pleasure to dutiful , healthy, but rather dull eating.

As mentioned earlier, it is not a vegetarian cookbook, I guess a good quarter of the recipes involve inexpensive cuts of meat or fish, but certainly some of the meaty or fishy numbers could I think be adapted by the vegetarian cook, using tofu or pulses, as for the most part the flesh food is more Eastern and Mediterranean in quantity – if a recipe includes meat it is in smaller amounts, not groaning trenchers of severed limbs and the like – hence the possibility of replacing, for example, a recipe of asparagus and mackerel sashimi with pickled ginger, orange and soy dressing with smoked tofu in place of the fish.

Because I AM vegetarian, I’ve found a flesh free video of Tom demonstrating how to make a dish – there are some one’s I hid behind a couch, rather than watched, sobbing plaintively.

In a sense, though undoubtedly delivered with style and panache, Hunt’s recipes invitingly call out to the home cook to adapt and experiment with what you have to hand in YOUR cupboard – it is easy to see these are recipes designed to release your creativity in the kitchen, not stifle it into nervous following of rigid instruction.

I particularly like Hunt’s using up everything possible from the cooking process in interesting ways – a lovely example, from our current ‘apricot season’ is, having poached your fresh apricots, perhaps for an apricot melba, reserve the poaching liquid to add to white rum, lime juice and sugar and, hey presto, a daiquiri!

This is a cookery book with a lot of heart, joy, compassion and passion, as well as stuff to make the diner drool with anticipatory pleasure, and the cook happy in that fine dining can be produced without spending a life-time turning a lettuce leaf into something to be submitted for the Turner prize 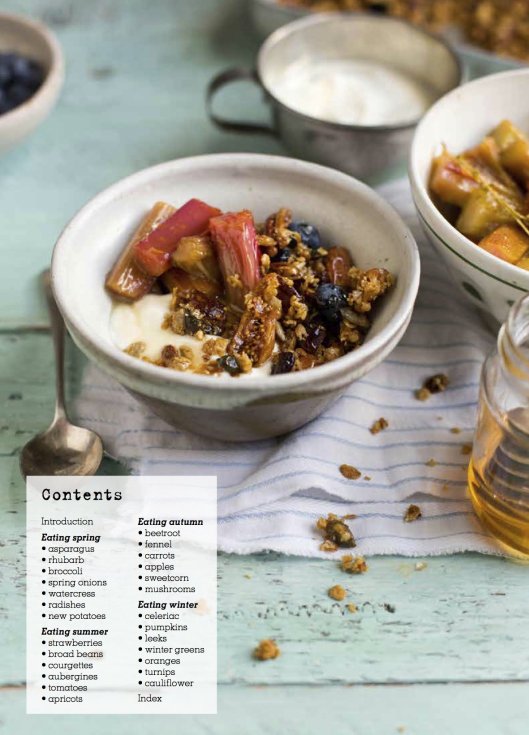 The look inside lets you see some recipes, so its easy to try ‘is this my kind of food; do the recipes work; are they do-able or just faff’ etc, and the index also gives a fair idea of the recipes.

Hunt, as I think is explained in the look inside section, has based his cooking on excellence in home and traditional dishes – ‘regional cooking’ where the regions take in other countries as well, but this is not about cooking as art form or cooking using fashionably rare and highly exotic ingredients, and you won’t need to purchase arcane equipment in order to achieve fabulous results. No foams, no jus, no blowtorches.

Readers from outside the UK may well of course find that the availability of product, and the time of the year it is locally 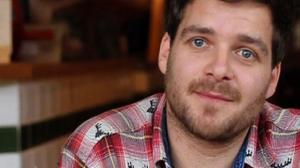 available won’t dovetail to perfection the way it does in the UK, and that you may wish to adapt recipes from UK local produce, with your own local produce. As stated earlier, Hunt really encourages that sort of creative, adaptive approach. he is a wonderfully relaxed, confidence inspiring cook, rather than one of those who will leave you sobbing because you followed the recipe to the nth degree and ended up with something looking like a dog’s dinner, and tasting so hideous that even the dog walked away from it. Recipes, I imagine, invented by star hissy fit prima donna chefs whose aim is to humiliate the home cook!

Tom Hunt’s lovely, enthusiastic and welcoming sharing of his food beliefs and scrummy recipes are further available on his blog tomsfeast.com which I for one will be bookmarking