Impressed by what isn’t spelt out, and a subject matter quite shocking for its time

I couldn’t resist hunting down a second hand copy of this, after my recent read of Bates’ Love for Lydia, and an absolute surrender to it. Love for Lydia was the first Bates I have ever read, but researching him for my review made me realise he had been the author of The Triple Echo. Now I never read this, but I still remember it as quite a startling film by Michael Apted, and was keen to read the original source (and then try and hunt down the film )

The Triple Echo is a short novella, and its economy is a real strength.

Originally published in 1970, towards the end of Bates’ life, the Penguin version I sourced is 90 pages long, and has some rather nice line drawings by Ron Clarke – presumably because otherwise the page tally would be even shorter!

The book is set in 1942 or 1943. Alice Charlesworth is a farmer’s wife, living in an isolated small-holding. The location is un-named, but possibly Northamptonshire. Alice’s husband has been missing, a Japanese P.O.W, and she is living in the isolated farm, trying to eke out a living from selling her hens’ eggs

The farm was one of those small half-lost farms that are cut off from main roads in summer by dense barriers of beech and chestnut and repeatedly in winter by mud and fog and snow. The red-brick two-storied house and its one barn had once been thatched. Now both had a roof of corrugated iron that shone harsh grey in the summer sun and lay on them in winter like a rusting, crumbling crown

I’m discovering this is a real hallmark of Bates’ writing – he makes the reality of setting absolutely real – and so he does for his characters, who however much they might fall into recognisable types, are also fully fleshed and individual.

Alice’s present life is grim and unremitting. She is struggling single-handed to keep things going, and is fiercely protective of her land 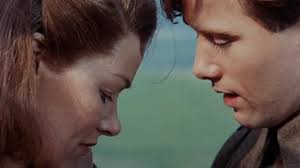 Into her solitary existence comes a young squaddie from a nearby Army training camp. Barton, like Alice is lonely and isolated. He is not a natural for the army. He is also a farmer’s son, and intensely missing his own Oxfordshire home. He walks the countryside in his time off. Alice has become harsh, suspicious and fierce. Barton is younger, with an innocence and sensitivity about him The two discover an attraction. Alice softens and re-engages with her femininity, whilst Barton takes on tasks which her missing husband would have done, like mending tractors. Barton decides to go AWOL from his hated squadron, and the two are driven into a complex subterfuge to hide him from capture. What started out of passion and mutual need however, quickly becomes a trap for both, since the two are now complicit in Barton’s desertion from the army.

Bates explores the unravelling of an illicit, co-dependent relationship, and the ambivalent power balance between the two central characters. But the most interesting dynamics are around a shifting sense of gender identity. Now this is something very much in current awareness, but at the time of this book’s writing, I think Bates was exploring something quite shocking.

Into the uneasy, troubled, trapped relationship between Alice and Barton comes, like some kind of provocation of mythic destruction from a Greek tragedy, a blustering, crude bully of a sergeant, stumbling across the homestead purely as a result of a map-reading error

What I found particularly interesting in this short, extremely powerful novella – was how much Bates makes the reader’s imagination work. The major cataclysmic event is never described. The reader knows where things are heading, and so does Alice, though nothing is ever spelt out.

Bates had apparently spent more than 25 years writing this. The idea occurred to him in 1943, but did not come quite right; this was one which sunk into some kind of hibernation, before he discovered what he needed to do in order to make this the wonderfully taut, intense reading experience it is.

light immediately flooded in on a canvas that had been so long irremediably dark, and in a mere three weeks the story was extracted from the womb it had apparently been so reluctant to leave

That marvellous quote, from Vol 3 of Bates autobiography, The World In Ripeness, not to mention the history of the writing of the novella, came from a fascinating website I discovered, The H.E. Bates Companion.

I have noted, again, in my reading of this, as in my reading of Love for Lydia, I have felt the need to make reference to Greek Tragedy. Somehow, in both books is the sense of something enormous, archytypal unfolding, but Bates’ writing, which is very disciplined, lets the story be huge, and dramatic, but it is told with restraint, which works brilliantly

As for the film, which I found in a fairly dreadful (technically) upload on YouTube, no decent DVD copy  available to buy, it is indeed a powerful piece, but is ‘based on’ the novella, and, as is the way of things, what Bates does not state is shown, and the scene left to the reader’s imagination is played out in some quite brutal detail. Brilliantly, it must be said, due to the strength of performances, but I am pleased I took the decision to read the novella before seeking to watch the film again. Bates has an economy and finesse, and I appreciated that. He turns the searchlight on the three central characters, and extraneous personnel are pretty well absent, so there is nowhere else to hide or distract from the strange shocking, inevitable and brilliant ending.

Rather sadly, despite the reissuing of some of Bates’ titles, this one seems firmly at the whim of market-place sellers or a lucky turn-up in a second hand bookshop. It’s a pity.