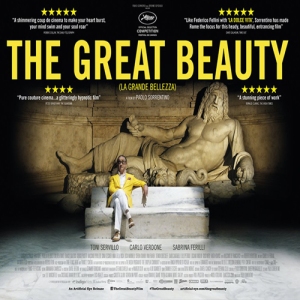 Paolo Sorrentino’s much lauded, multi award winning film about La Dolce Vita, the hedonistic, excessive, stylish – but ultimately exhausted ennui of Roman high-life is itself a feast of beautiful, empty, melancholic ‘so what’ exhaustion.

I was not completely certain, despite the wit in the script, the gorgeousness of the vistas and especially the stunning, stylish women, which the camera lingers lovingly over, in their often naked voluptuousness, whether what I was watching was art, or merely another excuse to show beautiful women naked, and a parade of ageing powerful men clustered like vampires in a feeding frenzy round succulent female flesh.

The central character, through whose eyes we ingest Rome’s beauty, fiddling whilst – not necessarily Rome, but life itself, burns and is destroyed, is Jep Gambardella, a 65 year old journalist, of acerbic, mordant pen. Jep is lionised by his society, he is, as he always wanted to be, a mover and a shaker, and delights in being the sort of man who attends the best and wildest and excessive gatherings, but is not only the man who attends those parties – but the man whose dismissive words can make those parties FAIL. Once, many years ago he wrote a novel which was praised high, now he makes and unmakes reputations.

The unseen presence which stalks through the film is the grim reaper; death. Although it is hearing of the death of his first love which brings existential despair up close and personal for Jep, we see through his eyes, as he plunges into the swings and roundabouts of parties, sex, and spectacle that he (and all around) are doing this to stop awareness of the knowledge that we are all on that journey to the grave.

The film swings constantly between the overindulgence of spectacle, movement, noise and distraction, and silence, emptiness, spaciousness, some kind of surrendering acceptance, as exemplified by the presence of a 103 year old nun, soon to be canonised. However, the spectacle of the lizard-faced, decrepit nun crawling in suffering penance on hands and knees up a flight of stairs as part of her spiritual, saintly journey, is no particular solace either.

The performances, (especially Toni Servillo as Gambardella) are all impeccable, the whole filmic quality of the piece is lush, wonderful, artful, but at the end I was left looking for something which I’m not certain I found – something to value, some quality of heart. In some ways, though the characters in this piece have a sophistication and finesse, and a stylish wit and brio, which makes them at least knowingly witty company, I was left with the same feeling of distaste for humankind which reading Bret Easton Ellis’s The Laws of Attraction gave me. And the point of that comparison, is that this is as partial and incomplete a view of humankind (very little that is kind, in this) as the other side unreal saccharine view of traditional Hollywood. This was a world peopled pretty well by only the stunningly beautiful or the Fellini-esque grotesque. It missed the extraordinary of ordinary itself.

As filmic spectacle, it is indeed splendid, but is it more than just a very finely lacquered mind-game to be dissected and debated. And is that enough?