“If you speak Cat at all there is no reason why you should not speak it fluently. It is simply a matter of application”

The sparky, weird (sometimes a little Shirley Jackson-ish) Sylvia Townsend Warner has here written a rather wonderful book of ‘fairy tales’ from a particular perspective

The narrator, or perhaps we should say, the editor, comes by chance on an intriguing house in the English Countryside, It is

a seventeenth century house with a long façade and a reed-thatch roof. It gave an impression of slenderness, of being worn smooth and thin like an old spoon

The house and gardens contain perhaps 19, perhaps 27 cats and kittens. And the tenant of the house, and perhaps amanuensis and companion of the cats, is an unusually handsome young man (in the eyes of the narrator)

We cut a great deal of asparagus, and carried it into the kitchen. While I trimmed it and tied it in bunches he prepared nineteen fish dinners, and stood in the yard calling:

“The cats, the cats! The little cats!”

Besides the asparagus there was some cold pigeon pie and a plateful of sugar biscuits. And there was a bottle of vin d’Anjou, Several cats sat in the dining room, some on chairs, some on the window-sill, some on the large rosewood table. When, with the sugar biscuits, coffee and brandy were served, one of these, a massive marmalade cat, rose up and began to sip delicately from the wide glass

The young man is fluent both in speaking and understanding – and, in fact, the love of his life was a remarkable Siamese cat he met whilst employed in Turkey, in the diplomatic service. Haru, the cat was a consummate storyteller, and like Sheherezade, beguiled with her stories. William, the young man, quickly began to study these, and other stories and which he realised were savage and instructive variants of the various myth and fairy stories which are so commonly told to children across the globe. It quickly becomes clear the original of ‘our’ fairy stories were tales told by generations of mother cats to their kittens.

And the stories are a little odd – for example, The Fox-Pope :

A fox who had been reading the Lives of the Saints was so delighted with the style of the book that he decided to become a saint himself. It seemed to him that he would be happiest as a hermit; so he retired to the Transylvanian Alps, taking with him a great bundle of lettuces and a cold chicken to eat on Sundays and saints’ days

These are not just whimsical and fey though. Townsend as a writer is far closer to Grimm (or Jackson) than she is to pretty Perrault. So we have crows feasting on the eyes of corpses, and our almost Fox-Pope resisting the nymph like temptation of a female rabbit whilst eating her litter ‘as solitude is essential to hermits’ 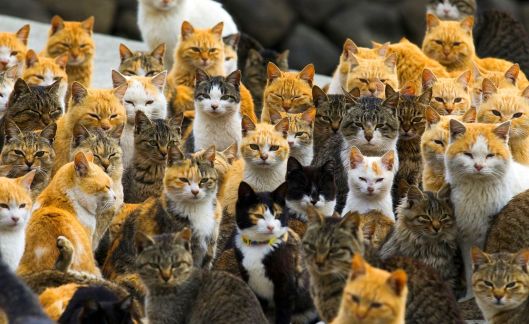 What we have here, then, is a collection of some of these cat’s cradle stories. But, before we can begin to enjoy them, it is only fair to warn the ailurophiles who are the ones most likely to enjoy these strange and literary tales, that though the narrator clearly loves cats, since she has learned to understand the language, though she only speaks it tolerably well, there is quite a lot of heartache to go through, as there is a high count of loved cats who are passed into cat afterlife. This is not due to human savagery, merely time, and the length of a life

This is a delightful collection – however, I feel both mean and heartless in championing it. The book is out of print, no digital version exists, and I may have snaffled the last inexpensive second hand copy, advertised on Abebooks, after a fellow blogger praised this collection, following a chance find in a second hand shop. The Cat’s Cradle Book was originally published in 1960 by Chatto and Windus.

We can only all hope that someone decides to reissue more of Townsend Warner’s books, or, perhaps, a wonderful epublisher of ‘forgotten’ minor (but wonderful) uniquely resonating voices from earlier in the twentieth (like Open Road Media) brings these back.

I note that Townsend Warner seems to be appearing and re-appearing on a lot of literary blogs whose authors are particularly active in championing unjustly vanished out of consciousness and print, writers, particularly those who were at one point so well served by Virago

And I must of course make obeisance to Jane from Beyond Eden Rock. She is one of the bloggers buzzing about Sylvia Townsend Warner and is indeed that blogger who found a copy of this, in a second hand shop. I did not trust time, and chance, and went screamingly in search on the Internet. You can read Jane’s alluring (or should I say ailuring) (!) review here