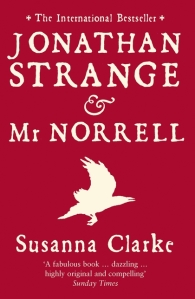 This book is such a pleasure!

But,  it is indeed, very long.

It is, if you like (and even if you don’t like!) an alternative view of the Napoleonic era, in this country, and at war with the French. However, it isn’t the world quite as we know it as the agency of strange and egotistical magicians is sought by the powers that be, to help this country win the war

To those who got hooked, as I did, nearly 10 years ago, when I read it (no it didn’t take me 10 years to read!) the length was a pleasure, not a torment, as i wanted to stay within its world. It certainly isn’t a ‘page turner’ that races you along because of a plot driven narrative, but it lures the reader in nonetheless.

Its a bit like an absolutely delicious, but very, very rich traditional fruit cake, so if you really want to get the best out of it, its better savoured and enjoyed rather than crammed down in one sitting!

At the time, her writing was being compared to both Jane Austen and to Thackeray, I think both because of the undoubted wit in the writing. Personally I think the Thackeray comparisons are quite accurate, more so than the Austen ones, as she writes on a ‘world historical stage’, as Thackeray did in his time.

This is certainly a high, fantastical novel but not really ‘an adult Harry Potter’ – perhaps, more properly a magical view of real history. She sets the book as if it were written ‘now’ in the early 1800’s, with a literary style to match, writing about the Napoleonic Wars as if they were happening. There is a wealth of historical detail, colour and flavour – and into this, she injects her fantasy about magicians – but because she sets this magic firmly within the historical context, – even down to the brilliant device of citing earlier magical texts (which don’t exist of course!) which she quotes extensively from in the footnotes you will find yourself believing this alternative view of history.

Beautifully written, very funny – in a sly and witty manner – and also terribly moving, I was torn between the desire to finish it – and also couldn’t bear to finish it.

I’m not altogether sure whether the history books’ descriptions of how Britain won the Napoleonic Wars may not be the fantasy version, and Clarke’s version – disappearing armies, altering landscapes and resurrected soldiers of earth isn’t the true version after all!

This will i think appeal to those who at the same time also were entranced by Elisabeth Kostova’s The Historian – possibly the only vampire book, apart from Stoker’s original, that i ever gave house room to. Both writers are really firmly in a fascinated with history itself camp, and are also well imbued with discipline in their writing, and fine, dark, occasionally quite terrifying imagination.

And I suspect a re-read may be on the cards, once autumn comes, nights draw in and the world of dark magic seems 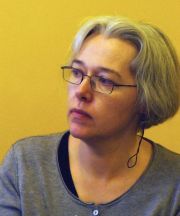 The book was weirdly and spookishly illustrated by Portia Rosenberg, however the illustrations are copyright, as she sells them as digital versions, so i guess you won’t find them accessible (though you can look on her website) unless you get the book