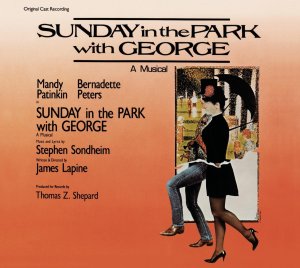 Including a You Tube link to an excerpt from the original Broadway Production of Stephen Sondheim’s Sunday In The Park With George, in a recent post, reminded me again of the magnificence of the music.

I saw this in a stunning production at the National, with Maria Friedman as Dot/Marie and Philip Quast as Georges/George, and have heard both albums made from productions – this Off/Broadway /later Broadway, starring Mandy Patinkin and Bernadette Peters, and a later UK revival which transferred to Broadway with Daniel Evans/Jenna Russell and have to say that for my money the Americans win hands down, heart open, ear sweet.

Stephen, Bernadette and Mandy, back in 1984, when rehearsing for the original production. Can more than 30 really have passed?

To my ears and viscera the later British CD gains more of the dialogue, and yes, Russell is easier to hear the wonderful lyrics with, as Peters at times flounders in managing the fiercely rapid fire sung lyrics, particularly in that fizzing, dizzying opening track, however, I am more aware of Evans and Russell as musical theatre performers. By contrast, Patinkin and Peters make me feel as if I am relating to Georges/George and Dot/Marie. These two, though clearly immaculate in their technique and craft, seem to sing from within the characters they are playing.

Sunday In The Park With George is my very favourite Sondheim musical – witty, intense, audacious it takes as its inspiration the 1884 painting by the pointilliste Georges Seurat, A Sunday Afternoon on the Island of La Grande Jatte and follows the story of the painter himself , through using his writings and ideas about art, and his artworks, and some of the major events of his short life, and the invention of the lives and identities of the people painted in that picture – most particularly, the woman in the foreground on the right hand side of the painting, with the monkey on a leash. As Dot, Seurat’s model and lover. Act 1 takes place over the two years from 1884-1886 which it took Seurat to paint his picture, which now hangs in Chicago 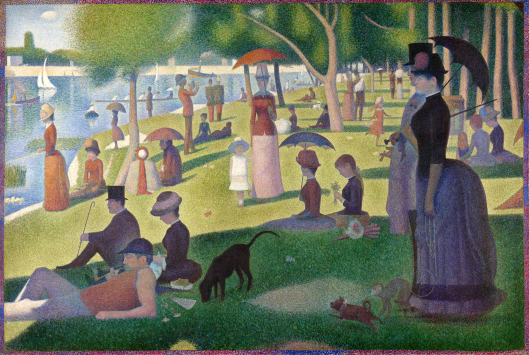 Act 2 takes place 100 years later. George is a fairly successful installation artist, someone much more commercially driven, working the corporate world, part creative, partly with the wily cynicism of one who schmoozes but has lost his creative way through trying to second guess which way artistic fashion is heading. George is presenting his latest work, and installation structure, Chromolume Number 7, built on an initial inspiration from the pointilliste and chromolume ideas of Seurat. Marie, George’s elderly grandmother, close to dying reflects on her memories of her French born mother, Dot, and is a conscience, a beacon and ultimately a re-awakener of George’s lost truthful creative voice

The album does stand on its own, but inevitably has much more bite if you know the staged musical.

Now the quality is not wonderful, but there is a Youtube video (with Spanish subtitles) of the entire original Broadway production, with Patinkin and Peters, also, without subtltles, and unfortunately cut into the usual small sections, more or less all the songs can be found from that production

I particularly love the two harmonious end of Act 1 and end of Act 2 ‘Sunday’ numbers, set against the all at sea quarrelsome dissonance of the opening Act 2 number, ‘It’s Hot Up Here’. Taken together, these reminded me of Rossini’s operas where there is often a kind of waspy, frenetic, deranged chorus piece with every character snarling confusedly, slightly deranged, and an ultimate, wonderfully uplifting harmonious and beautifully balanced resolution

Peters rather breaks the listener’s heart repeatedly with her vulnerability and generous heart quality. And Patinkin is a revelation, a very fine singer indeed, as well as actor 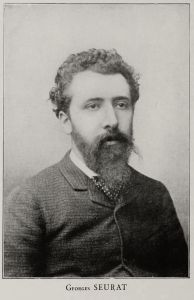 My only cavil for this album is the inclusion of one of the numbers, Putting It Together, presented not by Patinkin – it is an edgy, angst ridden, cynical and vituperative piece, interrupted by dialogue, in context. Instead, it is presented as a typically ‘musical theatre’ show stopper type piece, by a quartet of singers, none of whom belong in this production. It is, to my ears, glitz without heart or context. The final piece, although beautiful, again misses much – Peters in a tribute concert at the Carnegie Hall reprising one of the big Sunday chorus numbers. Which is somewhat different from the intensity coming out of the inhabitation of characters in relationship with each other, singing those numbers .

I have just finished reading Bret Easton Ellis’ Rules Of Attraction, which will not appear as a review on this blog, as I only blog what I am recommending (for the interested, the Amazons do carry reviews of what I disliked as well as what I raved about)

And I cordially loathed ROA. The choice of adverb is crucial – I loathed it through the heart, because it has no heart. Yes, I see what Easton Ellis is doing, laying out the spoils of a wasted, superficial, whining, shallow, self-obsessed, privileged group of Fratters at an American campus university in the 80s, but the problem is that Easton Ellis exposes their puerile, meaningless, unlikeable mass persona through an endless and superficial sneer mask.

One thing my reading did do, however (so well done, Ellis, there) is that it gave me days of impassioned debate and self-reflection on many things, thus fulfilling one of the purposes of art – to awaken, to make the reader/listener/observer notice, to make them think, respond, debate, engage.

And sometimes, what is perceived as ‘not good’ by the consumer of the art-work challenges much more than what reinforces or deepens one’s existing philosophies

Rules of Attraction is an unending expose of superficiality. The unlikeable characters are unvarying in their endless progression of barfing, whining about getting meaningless leg-overs or not getting meaningless leg overs. Pretty loathsome, there is no sense of the writer engaging with them, going below their surface. I guess he dismisses his characters as being no more than their boring and self-indulgent self-obsessions. A couple of thoughts surfaced on this, Firstly, I have never met anyone who is unremittingly one-note.

What is fascinating about living creatures, and the more complex those creatures are, the more they become fascinating in this way – and a self-aware being most of all – is the ‘dappleness’ of them. For what Gerard Manley Hopkins calls ‘Pied Beauty’

No one is either/or; all are and, and, and then more and. Take the time to explore any individual, and this leads to constant surprise, and anyone and everyone will yield they are more, much more, than the sum of their perceived parts – whether you have placed them on the side of the angels or the devil-with-all-the-best-tunes.

Where I say my loathing of Easton Ellis’s book is ‘cordial’ it is precisely through its shallow, superficial view. I really don’t like or have much time for those anguished over-privileged souls who are going through that stage where they are living in a constant in your face scream of over-indulgent self-mutilation. But Tell me, or better still, show me something NEW about them Mr Ellis – dismissing the ‘other’ is so very easy to do, smugly judging from my own superior sensibility is effortless. What I want from art is to shock me out of complacent dismissal of other – and make me see and feel them, make me walk some distance in their shoes. Take me to that uncomfortable, challenging place, rather than the easy, superior dismissal.

Great writing, in my book, humanises the subjects being written about – however base or noble they may appear, they need fleshing with the complexity of us all. We all know that we are not ‘just’ whatever facets of ourselves are visible, even to ourselves. Complex living creatures are full of surprise, and self-surprise

One of the facets I most valued in a sadly underrated, under-hyped book I read earlier this year, Patrick Flanery’s Fallen Land, is that he was able to take an extremely unlikeable central character, and without in any way condoning him, wrote him (indeed, possesses the gift to write all his characters) from within their experience, rather than the lordly creator god in judgement. Flanery writes ‘dapple’ – inhabiting a character both from outside (through the eyes of other) and from inside.

And, of course, this is  A truth – this is indeed (the awareness of our mortality, existential despair and unease, sometimes overwhelming) part of what drives the nasty, and the brutish (the endless barf, the endless meaningless leg over as an attempt to deny that awareness, or escape it), but is only a very partial truth. The Hollywood bows and happy wrap ending is, sure, superficial and childish, immature – BUT so is the unremitting savagery and wastedness. The all dark and the all happy clappy equally missing – by miles, the infinitely more complex and difficult, challenging and confusing, nature of reality 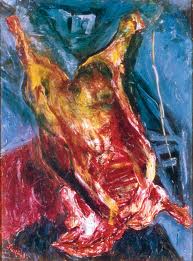 I am more interested in art which makes me see within the surface of ugliness to find the surprise of beauty. The French painter Soutine, endlessly painting decaying meat, performed this  feat, rendering the response of disgust into seeing  something new, some vibrant life in death

Sometimes it seems as if our tastes have become so very jaded that all we are able to respond to is the shock of being relentlessly beaten over the head with a hammer. Shock is relatively easy to achieve – just shout  ‘Boo’ in the ear of the unwary – surprise is something rather more subtle.

Sometimes it seems as if being edgy, in your face

and shouting a lot gets mistaken for the voice of authenticity; reality seen as only the nasty.

Show me the maggot at the heart of the Rose, the invisible worm, fine. But do at least show me the Rose as well.

Life affirming art is neither the chocolate boxy saccharine nor the unremitting display of meaningless degradation. Rather, life affirmation connects with reality (whether in that affirmation as lived, or created in art to show us the affirmation) precisely because it accepts the all-that-is – the deep despair that lies beneath the curiously unquenchable joy, the sweet intensity of an incandescent moment which is incandescent precisely because ‘this too will pass’ We are all on borrowed time.

What is it that is so compelling to us, about sunsets but the sense of blaze and despair combined, at the dying of the light – something primeval gets touched. I believe in oppositions, rather than the easy way of this OR that, as I see the oppositions and the reconciliations which they contain, all around.

I think of the wonderful, life affirming musical by Stephen Sondheim, Sunday In The Park with George, which captures so beautifully what it is that is important – the embracing of the fullness of the moment, finding a way to touch, with meaning, the little space and time allotted to us. The song ‘Children and Art‘ illustrating this perfectly

And (how wonderful) – someone has uploaded the TV version of the production, starring Mandy Patinkin and Bernadette Peters, in its entirety on You Tube! What i appreciate about Sondheim is the edge between the pain and the joy of the moment, and the acceptance that both ARE.
(the music does not start till after the titles and scrolling introduction)

However, it took the ire I felt at the dead inhumanity (as i see it) of Ellis’ vision to bludgeon me into a meaningful (for myself, at least) reflection on reality, and creative vision. So, if not quite respeck, at least thanks.