Sarah Perry’s 1890s set novel is one of huge vitality, imagination and verve. In some ways her delight in language, her playfulness, and the exuberance of her story telling remind me of Sarah Waters in her earlier outings which were also set in slightly earlier Victorian times : Fingersmith and Affinity (1860s and 1870s)

The Essex Serpent has achieved both commercial and critical success, and I had held off from it, fearful that this was just marketing spin. Eventually surrendering, it was clear from the off its plaudits are well deserved. Perry has crafted a most enjoyable read. She tells a good story, creates memorable characters and is also writing informatively and thoughtfully ‘about stuff’ . Principally social issues around privilege and the lack of it, the conflict between religion and science, and female emancipation, at the tail end of the nineteenth century. Occasionally I did feel she created one or two over complicated issues (the autistic son) plus the odd moment where things felt just a little out of time and modern – a bit too much to-ing and fro-ing and travelling between coastal Essex and London : journey times would have been considerably longer and a swift visit to the British Museum Reading Room in order to get some information to enhance a Sunday sermon seemed a little twentyfirst century casual commute rather than 1890s.

Perry’s aim has been to show a different view of Victorian society, and, particularly its women, focusing more on the unusual, radical, progressive elements rather than the mainstream who might have lived within prim, submissive conformity within a paternalist culture.

Cora Seaborne has recently been widowed. Her deceased, much older husband is/was one of the few really unpleasant characters in Perry’s novel. Sadistic, controlling and, frankly just a powerful, influential bully, he had captivated Cora when she was impressionable and young. One of Perry’s strengths is that she gives the reader enough information to make sense of people and their history, but does not get caught up in needing to over-explain everything. Hence, the reader is left uneasy about what appears to be a branding mark inflicted on Cora, and our imaginations will provide further shadowy questions about a toxic marriage whose specific parameters do not need to be gratuitously spelt out. 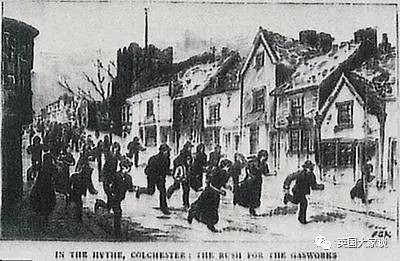 Colchester Earthquake of 1883 – ripples on in this book

Cora, despite the endured abuse, has a keen and enquiring mind, and thinks for herself, whatever external strictures were placed on her by her thankfully now dead spouse. She is captivated by science, by Darwin, by Mary Anning. Now a woman of independent means, she can choose to turn reading about the natural sciences into practical investigation. She is a strong female presence, not a submissive or surrendering one, and intends to follow the star of her intelligence and passion for knowledge, debate and discourse. She is not a beauty according to the standards of her time, but her unusual vitality and independence of thought do make her attractive to others similarly unconventional, and free-thinking

you cannot always keep yourself away from things that hurt you. We all wish that we could, but we cannot: to live at all is to be bruised

Martha is a similarly unusual individual in the Seaborne household. She is Nanny to Francis, Cora’s autistic son, and is a radical socialist, a follower of Eleanor Marx, passionately concerned with righting the wrongs of the disadvantaged and dispossessed, with a particular interest in provision of social housing for the poor – initiatives like Peabody date from the 1860s. Also dancing attendance on Cora is a young doctor, radical in his field, interesting in exploring cutting edge (literally) developments, particularly in surgery. Dr Luke Garrett, and his more conventional kind hearted friend and colleague George Spencer are the means by which the reader learns much that is fascinating about late nineteenth century medicine. Friendship itself, between the sexes as well as within the sexes is a major theme of this novel. In almost every relationship it is the mental, and emotional connections which are the lasting and transforming ones rather than sexual connections. Sex, whether expressed overtly or covertly is a powerful driver also in the novel, but it is friendship which provides endurance.

And so to the title – The Essex Serpent takes Cora and her entourage (and us) out of London and to an imaginary location in Essex’s coastal waters. There have been, by all accounts, mysterious sightings of a ‘sea monster’ (one assumes some kind of oceanic Loch Ness Monster). Dark and subterranean rumours about the monster surface, laced with symbolism and biblical portents, terrifying and titillating the local population in equal measure.

The local vicar, Will Ransome, a man of sure, and at the same time, rational faith, is determined to stress the importance of living a good, moral life through practical ‘love your neighbour’ Christianity. He espouses Christianity with a social conscience, and strives to be a moral compass for his flock, encouraging living through kindliness and compassion without appeals to the fear of hellfire or the fevered prophecies of the Book of Revelations. Some of his flock gravitate far more naturally towards that gothic outlook.

His was not the kind of religion lived only in rule and rubric, as if he were a civil servant and God the permanent secretary of a celestial government department. He felt his faith deeply, and above all out of doors, where the vaulted sky was his cathedral nave and the oaks its transept pillars: when faith failed, as it sometimes did, he saw the heavens declare the glory of God and heard the stones cry out

Cora and Will, both naturally enquiring and subtly thoughtful have divergent views about the world of matter, but neither is as closed minded as each initially supposed. A curious and strong friendship forms between them, with argument and disagreement uniting them as much as it divides them. Both are extremely keen to solve the ‘mystery’ of The Essex Serpent, and both hope that their own theories will be right. In many ways, Cora and Will are ‘soulmates’ precisely because intelligence, subtlety and warm-heartedness mean they can discourse with each other about matters which can’t be understood by others. Will’s beautiful, ethereal wife Stella is loved by all – including Cora, who forms a firm friendship with her. She is a well-rounded, more interesting version of the sweet ‘child-wife’ staple of some Victorian fiction – Dora in David Copperfield.

Perry’s book has been severally described as a historical novel, a romance, Victorian gothic, and a novel of ideas. All of the above.

On turns the tilted world, and the starry hunter walks the Essex sky with his old dog at his heels, Autumn fends off the diligent winter: it’s a warm clear-eyed month, with a barbarous all-too-much beauty. On Aldwinter common the oaks shine copper in the sunblast; the hedgerows are scarlet with berries. The swallows have gone, but down on the saltings swans menace dogs and children in the creeks.

Perhaps part of the afterword, in my Kindle edition shows best what Perry aims for. And succeeds in doing, in my opinion

My ambition as a writer is – more than anything else, I think – to give joy and pleasure to readers; to convey to them the love I feel for my characters, and the places they walk, and to have them feel what my characters feel.

Bravo, Sarah Perry. You do and you did.