A prescient, and grown-up, view of terrorist acts, written for a teenage audience 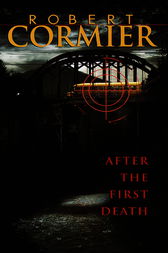 I was pointed in the direction of this book, originally published in 1979, for a teenage audience, by another reviewer, who referenced it in comparison to The Good Father, a recent book for adults, which looks at the psychology of the lone assassin, but focuses more on the father of the disaffected young man, than the assassin himself.

Cormier has four major protagonists, through whose eyes the story is examined. The major event is the hijacking of a bus full of children by 4 men from an unnamed country, most probably one of the countries of the Middle East, as part of a political protest, and in order to get hostages released and the plight of their country to be openly seen, on the world stage. The major characters are Miro, the young man who has been groomed into freedom fighting/terrorism, Kate, the young woman who happens to be driving the bus, full of 4 and 5 year olds, and Ben, the son of a shadowy figure high up in the US military, who is precipitated into a pivotal position as messenger/go between. The fourth character is his father.

Realistically, I found the exploration of the father/son relationship, and indeed the Ben part of the story, the least credible, in terms of realism, but as this book was written specifically for teens, the unlikely choice of emissary makes sense. In fact, it’s the only thing which gives away its designated audience, for this book is very adult indeed. Cormier makes no authorial ‘these bad guys are monsters’ calls – he explores the how they came to be as they are, with great subtlety. We see Miro through the growing understanding and subtle intuition, empathy and thought of Kate, who is able to grasp how such monstrous actions come to be, without condoning them. Miro too is challenged by his realisation of the humanity of his ‘enemy’

simplistic gung-ho good guys win and nuke the baddies to kingdom come splatt! type of book. This is not a spoiler. Kate, undoubtedly the most emotionally and mentally astute of all the characters, the most able to see behind the masks we hide behind, is clear, right from the very start that there can be no ending without dreadful loss. Cormier repeatedly, through Kate, prepares us for a real world which is brutal on all sides. Sadly, the subject matter of this book has become more, not less, pertinent and of the present in the more than 30 years since it was written. It’s a book for our time, even more than for the late 70s