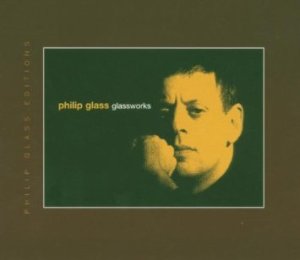 Glassworks is a beautiful thing, gentler and more reflective than the vibrant, glittering repetitions which are typically associated with Philip Glass.

In Glassworks, only 2 of the pieces, Floe – like a first sudden moment at the start of a tropical dawn chorus – and the brass section sax rich shining Rubric, have the fierce edges. The other 4 pieces are more simple, flowing, watery.

There’s a typically Glass like circling quality to the whole CD – the opening track ‘Opening’ simply keyboards, for all the world a whisper away from the slow movement of one of the great Romantic piano composers, is echoed again in ‘Closing’, where the piece has become more textured by a chamber orchestra taking it up.

Glass’s typical repetitions, small builds and diminishings don’t feel meaningless in any way, there’s something really satisfying about being held in a structure which changes slowly. ‘Opening’ has the lovely muted grey violet quality of dusk.

Floe starts plangently, softly, and then explodes into edgy texture, rushing piccolo, sax, horns, its like a thousand cicadas wiring up for the day, and there’s something very thrilling about it. Just as you think your nerve endings can take no more of the texture and vibrancy, the track settles back into a breathing space for itself and then whirls off again to its resolved climax

Islands moves back into something more flowing and haunting, slightly melancholic, even a little menacing, with strings in a minor key, odd snatches of melody which feel as if they belong to ‘Psycho’ or ‘North by Northwest’!

Rubric, is the most jazzy, riffy of all the pieces. I found myself responding to it in that head nodding way of marking the rhythm that often seems to happen when people listen to jazz!

Facades is simply beautiful. It probably has the most shifting melody going more quickly to new places, melancholy and soulful, strings and sax, played sweetly and sadly.

tracks, which does exist as an mp3 – I only have this, shorter album as CD, so am used to its more contained musical shape. The expanded version does have a much more appealing cover pic though (illustrated here)  Unless you were a Glass Fan you really might be offput by the unappealing brown cover replete with Glass a scowling. It says ‘Don’t Buy Me!’