A deep meditation on alchemy in the kitchen

Michael Pollan is a writer whose mind so excites me that I often feel I need to take a cold shower in order to calm down my over stimulated thoughts, which start veering off into several directions simultaneously.

Pollan is a philosopher and mystic of the mundane, in my book. Some philosophers and mystics begin from the ineffable and the intangible and whirl you around in concepts almost impossible to get a handle on.

By contrast, Pollan is like another favourite writer of mine who performs the same trick, – Sharman Apt Russell Hunger: An Unnatural History. Both start with the quotidian (Bread, potatoes, barbecued pigs, roses and the like) and expand outwards , opening them out to reveal worlds – anthropology, evolution, economics, psychology, desire, history, chemistry, biology, physics, feminism, capitalism, poetry, metaphor, the interconnectedness of all…………….I could spool on, endlessly, the big concepts Pollan (and Apt Russell) connect, by starting on the basic stuff of matter – food, shelter, and weaving it all together

In this book, he examines something so basic, cooking – and indeed the lack of it, in

the `developed’ Western world. Something which once created social bonds and community disappears as we spend more time in front of screens, eating `convenience’ ready meals which have not been made by anyone we know.

Almost the first gauntlet which Pollan throws down is the one which asks, `just what is it which makes us human, and different from `dumb beasts?’ And as the things which formerly we thought of as `human’ – for example, language, empathy, ability to problem solve, are increasingly shown by animal behaviourists to occur in other species – he concludes `we are the cooking animal’ – and perhaps controversially suggests that from cooking all else of our developed, intelligent humanity, flowed

That sounds a ridiculous statement – except when it is put together with the fact that cooking not only tenderises sinewy animal muscle, softens and makes available resistant plant fibres – but means we no longer have to spend most of our waking hours chewing, in order to get at nutrients. Even more usefully the chemical changes produced by cooking releases nutrients more easily, in an easier to assimilate form. More calories available for less expenditure of calories. Less work for the gut (and the jaw) and a higher yield of glucose for the brain.

Cooking is all about connection….between us and other species, other times, other cultures…..but, most important, other people

This book compares cooking to alchemy – and indeed, he breaks his chapters down to the poetic and alchemic four elements of fire, water, air, earth.

At the beginning of each section of the book, are different displays of circle logos. Don’t miss these – they are actually quite profound in terms of visually, what they are saying about the inner nature of each cooking process. Pollan thinks like a mystic!

Cooking is one of the more beautiful forms that human generosity takes;…….the very best cooking…..is also a form of intimacy

Fire, the first, the earliest cooking – the `dangerous’ primitive cooking of the hunt (and still, today, men are more willing to take charge of the `mysteries of the `barbie’ then to move indoors to the deeper alchemy of the kitchen) 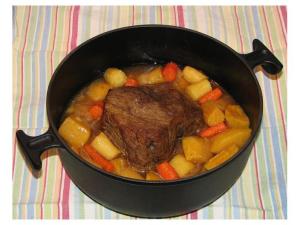 Water – the next major step, the more mysterious, more advanced `inside the home’ cooking – which needed to wait for the development of cooking vessels – this became what was seen as `women’s work’ – cooking in a liquid. No longer the fire directly heating the food, fire tamed to heat liquid which heats a more complex possibility of flavour, not to mention a greater complexity of chemistry, as this is cooked in combination with that, that and that.

Air – the mysterious agency when our `cooking’ gets done

by some other transformational agent – yeasts, enabling us to finally access the nutrients in grain (as we evolve to an agricultural society) – the alchemy of yeast, grains and breads. In this section he almost for me rounds the journey of the book. He reminds us again of the evolutionary advance cooking represents – a way of processing what is, or what might be, edible, in order to make more of its nutrients available, so giving us the advantage towards greater health and wellbeing. Traditional bread making, whereby WE are able to get at the seed potential, the embryo for the germination of new seed.

And then, as he reminds us, we score a fatal own goal – moving from the health giving ‘processing’ of cooking itself, to OVER processing whereby we strip what is nutritious, producing a substance quickly (the commercial white bread loaf) that not only has no nutritional value at all, but is in fact detrimental to health. This then has to have other, synthetic forms of what WAS nutritious in the first place, added back in. The contrast between mankind’s initial discovery of how to utilise the goodness of whole grains – time an integral part of the process, allowing slow fermentation to break down and transform proteins, fats and carbohydates – and modern breeding of strains of wheat which are easier (quicker) to process, fitting modern machinery, but are less rich in nutritional value, is clear.

The final chapter, `earth’ continues the process with

preservation through the fermentation process without ‘cooking’ – salting, pickling, cheesemaking, brewing – or, as Pollan much more evocatively subtitles this section – Earth – Fermentation’s Cold Fire. Indeed, he takes his conceit further, what we are seeing, in fermentation is the move from life to death – the grape, once perfectly ripe, begins to decay, break down, and ferment to wine; the milk soured into yoghurt or cheese; the cabbage into sauerkraut. Or, put another way

” these transformations depend on the fermenter’s careful management of rot, on taking the decompositions of those seeds and fruits and fleshes just so far and no farther”

I could go on – and on – and even more on about the delights of this book, but really, yours is the journey to make.

If you don’t much enjoy cooking, this might inspire you to connect with its mysteries (though its not `a cookery book’) if you love cooking, you will feel like some entrant into ancient mysteries as you engage with your next kitchen assignment

‘Hand taste’…is the…experience of a food that bears the unmistakable signature of the person who made it – the care and thought and idiosyncrasy that the person has put into the work of preparing it….Hand taste is…I understood all at once….the taste of love

The food, the whole food, and nothing but the food; except less of it 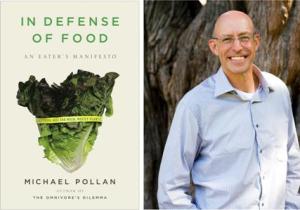 Michael Pollan’s hard-hitting, witty and possibly life-saving look at food – specifically the shambolic disgrace that is the ‘Western Diet’, sets its premise out right at the start – we need to:

Eat food. Not too much. Eat more plants.

That first statement might raise a few eyebrows. Surely anything we eat, by definition, is food? Not so. As Pollan shockingly shows, we stopped eating food in the West several decades ago, and began to eat ‘nutrients’ instead. As part of an ongoing ‘reductionism’ which gets applied to almost everything. our foods have been picked apart to analyse specific ingredients (in isolation) which are said to harm us or to help us. Politics, big business, whether the food ‘industry’ – which it has become as most of our food is now manufactured rather than, well, allowed to grow, graze or roam – or the ‘health industry’ have all benefitted from the ‘un’ food revolution. The individual consumer pays the price in terms of soaring rates of heart disease, cancer, obesity, type 2 diabetes and more. The planet and future generations pay the price in terms of depleted soil, the rapid fall in biodiversity and an unsustainable way of life. Our non-food is another way we are killing the planet. And ourselves.

Pollan’s book shows elegantly and easily how much our food has changed. He urges us

not to follow faddy diets which all look at food through single nutrient zealotry – eg ‘the Atkins Diet’ ‘the GI’ diet ‘the Omega 3 diet’. Look at the labels on any ‘packaged’ food. A loaf of bread rarely contains the ingredients your great grandmother would have recognised. Not only are there a whole host of ‘enriching’ additives and ‘nutrients’ – designed to replace those which should have been naturally within the original foodstuff but which modern farming techniques and agri-breeding for yield rather than anything else has stripped away – but the food will have been subjected to processes further depleting it of its goodness.

We literally consume more of our ‘food’ because it is giving us less in the way of ‘nutrients’, as Pollan says, the ‘Western diet’ manages an unheard of own goal – obesity coupled with malnourishment or deficiency!

Throw out the faddy diet books, throw out the supplements, throw out the ‘science’ – often bad science – eg margarine being ‘better for you than butter’ – eat food you can recognise which is simply grown or reared. The food we have evolved to eat over millenia. And recognise that food has always been about more than nutrients – its about our connection to the earth and to each other – food is a part of our culture, cementing and connecting social bonds. As Pollen engagingly shows, food loving cultures such as Italy and France celebrate and enjoy food, as part of life’s pleasures,; they don’t eat nutrients! And they tend to be healthier. Or at least they were, till ‘the Western Diet’ (ie McDiet) began its parasitic onslaught into every corner of the globe
In Defence of Food

Desire for beauty, sustenance, and intoxication – a meditation on plants and man

Michael Pollan is one of the most interesting writers I know looking at the natural world, and, more particularly, at the politics, economics, cultural  and health issues around food. He has the most magical, open mind; the ability to take the everyday and look at it like a true artist – thus forcing the reader to look anew at his/her own everyday.

Here, he looks at four plant species whose development

and spread has been closely linked with Homo sapiens – the apple, the tulip, the cannabis plant and the potato, and considers the evolutionary advantage from the plant perspective. The book uncovers history, folk-law, economics, politics and much more.

Pollan delivers much fascinating information and has the lightest and most passionately engaged of writing styles. He is a wonderful raconteur. I read this book with a wider and wider smile, thoroughly delighted and enchanted.

This book reminded me in many ways of Anatomy of a Rose: The Secret Life of Flowers by Sharman Apt Russell. Both authors have the ability to be fascinatingly informative whilst simultaneously managing charm, entertainment, profound thought and beauty.

They are writers who can take the mundane, and open it to deep meaning, philosophical complexity and education

A small factual teaser from the tulip section – the most prized and valuable tulips were those variegated by fine filigrees of crimson patterning upon the primary colour base. But this was caused by the presence of a virus, so over time, plants grown from bulblets broken off from the ‘parent’ bulb would grow weaker and weaker – so increasing the rarity and fabulous cost of the prized variety. The evolutionary gainer from mans’ ‘meddling’, not the tulip, but the virus, which we disseminated!
The Botany of Desire