A curiously warm and charming tale about the fragile, lost and hopeless

Back in the nineteenth century, a French writer, Bernadin de Saint-Pierre, wrote a book about a brother and sister from Mauritius, called Paul et Virginie, which became a classic children’s book

Now Natasha Soobramanien has written a modern day story of a brother and sister, Paul and Genie, from Mauritius, coming to London in the 1980’s. Named after the characters in Saint-Pierre’s book, this is also a story of love and loss, and expulsion from a Paradise which may never have been

I had (and have) never read Paul et Virginie. There may well be allusions I have missed, but I really don’t feel it is necessary to know that book, to relate to this. In fact at one point Genie recounts the story of that book to a friend, so you get a nutshell version of it.

In many ways, this is a despairing and tragic book. It’s the story of people leaving their homelands, where they can’t find work, where life may seem (at least in memory) to be idyllic, but things have changed, and Paradise has been destroyed by capitalism. The (true) back story of Mauritius and its neighbouring island of Rodruigues and the Chagos Archipelago is one of the destruction of an idyll, by Western tourism, and also, dispossession. Chagos, a disputed territory, part of British Indian Ocean Territory, was sold by the British Government to the States in the 1960, for a military base, and the residents forcibly and brutally evicted from their island. Many were moved to Mauritius, overcrowding that island.

So that becomes part of the territory of this novel, that paradise despoiled.

The book is mainly told through the voices of the brother and sister, in short chapters, with other stories interpolated by friends, observers and other family members from different generations. 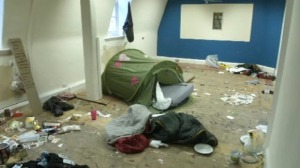 Paul, particularly, is a troubled boy, a troubled youth, and a troubled man. He drifts into drugs, moves from squat to squat, forms a relationship with an equally lost young woman, whilst his sister Genie, five years younger, hero worships her older brother, but is often badly abandoned and led astray by him, even as he seeks, rather helplessly, to protect her.

Almost everyone in these pages might be regarded as a loser, out on the margins, and the reader knows, pretty well from the off, that this is a story of failure.

hopeless, feckless, damaged characters, and their inability to find home. Part of that skill is that though this is a rather despairing and indeed tragic book, about wasted lives, she writes with a light touch. Its not that the book is humorous, it is that she trusts the readers will realise the tragic nature of the story, so she doesn’t have to lay on the tragedy with a trowel. She writes about rather sordid failure, with delicacy