Corruption and a dysfunctional family in modern Romania 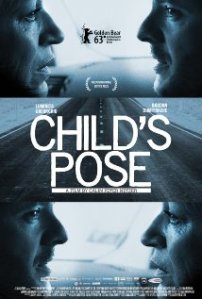 I’m a little unsure why the Romanian film Child’s Pose won the Golden Bear (Best Film) at the Berlin Film Festival, outside some fabulous performers by the actors, particularly Luminiţa Gheorghiu, on whose back this film really rests. The performers are truthful, understated, intense, especially Gheorghiu as Cornelia, a sophisticated moneyed architect, for whom money and corrupt power go hand in hand, who believes everything can be bought, including justice. Cornelia is also an exceptionally, almost pathologically, controlling person, in her personal relationships, as well as those she has with members of the wider society.

The film charts Cornelia’s cynical attempts to bribe witnesses, buy out opposition, subvert police procedures whilst showing absolutely no sensitivity or empathy whatsoever towards the un-powerful, ordinary family who have lost their young son. Cornelia has little, if any, nobility of character, and neither she, her feckless son, her ineffectual husband (Domnul Fagarasanu) or the various people she corrupts or may corrupt if the payment she makes is high enough, have much to like about them. A scene with Vlad Ivanov as another driver at the accident scene is particularly charged and powerful, his character matching Cornelia’s in unforgiving steel.

Why, given some terrific performances, was I left a little unsure about the film?

To be honest, some elements of the story line – notably Barbu’s peculiar obsessions which border on to some sort of OCD – seem a little gratuitously tacked on, and the revelations which came out in the scene between Cornelia and Carmen, Barbu’s partner, (Ilinca Goia) almost seemed like a subplot without a home, rather than something which really added depth to any of the characters.

As a film (as opposed to the dramatic or psychological aspects) there were some curious choices made in camera work – which at times almost seemed amateur, in terms of how some scenes, particularly at the start of the film were panned. I wondered in fact whether this was perhaps `a student film’ because the camera work seemed so unsophisticated and uneven

A standout performance then, from Georghiu, who absolutely carries the film, 5 stars – but her light makes a reasonably good film (okay, 3 star) appear more than it is

The film is directed by Calin Peter Netzer, who also co-wrote the screenplay with Razvan Radulescu