Strange, ethereal music : Russia and America, between the wars;  the darkness of espionage and the gulag, leavened by love 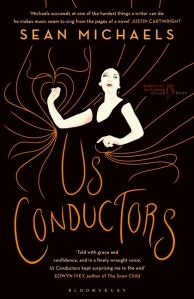 Sean Michaels is a Canadian author, though born in Scotland, so maybe he can be claimed North of the Border!. He is known as the founder of a long-standing music blog, Said The Gramophone, and is also North American music correspondent for The Guardian.

Us Conductors, astonishingly, is his first novel, and won Canada’s version of the Man Booker, the Scotiabank Giller Prize. Without having read the other nominations, perhaps I can’t comment : but this is an wonderful book, and I had completely surrendered to it by a handful of pages in, because, however the story was going to unfold, and whoever the characters were going to be, it was blazingly clear that here was a writer using language and imagery with beauty, conveying a lot with economy and precision. It made sense that this is a book about music (among other subjects). I think of notes, and the harmonics which arise from them, and I felt that quality in Michael’s use of language, realising  he was taking about more than one subject at a time :

Lev Sergeyvich Termen is not the voice of the ether. He is not the principle that turned glass into firefly. I am an instrument. I am a sound , being sounded, music being made, blood, salt and water manipulated inair. I come from Leningrad. With my bare hands, I have killed one man. I was born on August 15th, 1896, and at that instant I became an object moving through space toward you.

Michaels teases the reader with the following statement, before the book begins

This book is mostly inventions

Having finished the book, I smiled even more broadly at the clever double meanings in his disclaimer, which is followed by a quote from Tennessee Williams

In memory, everything seems to happen to music

Leon/Lev Termen was a scientist and inventor, whose initial fame came through his invention of the theremin:  ‘ an electronic musical instrument in which the tone is generated by two high-frequency oscillators and the pitch controlled by the movement of the performer’s hand towards and away from the circuit’

Here is Termen demonstrating his invention

Termen was a believer in the Russian Revolution, and in his country. He travelled to America as part of a trade initiative for Russia, between the wars. The theremin, and his other electronic inventions  presented opportunities to demonstrate the dynamism of Russia, the brilliance of its scientists, and to generate capital. Also, it appears that under the aegis of trade, espionage possibilities were possible.

In America, which Termen found an exciting country, and one which welcomed his brilliance, both as someone who was an artist, and as someone who was a scientist, he met a woman who was to completely obsess him – a Lithuanian born violinist, Clara Reisenberg, (later Clara Rockmore).  Clara, in her teens, developed bone problems which cut short her burgeoning career as a violin virtuoso. However her musicality, and her meeting with Termen and the theremin, meant she studied how to play this, not as some kind of gimmick, but as an instrument in its own right.

And I must admit, whilst sourcing media for this review, I listened to many Youtube videos of people playing the theremin, and thought ‘well it’s a bit of a gimmick, really’, until finding some recordings of Clara. Here she is playing Saint Saens’ The Swan.

Although Termen by all accounts proposed to Clara several times, she married another.

Meanwhile, Termen was inventing various security devices as well as refining musical ones, but was probably involved in darker matters. His loyalty to his mother country and those who were ‘minding’ him in his sojourn in America, led to his involvement as an industrial spy for Russia.

And then, in 1938 he was suddenly recalled to Russia, where he found himself regarded as a class enemy, was imprisoned and sent to the gulag.

None of these pieces of information are really spoilers, as they were rather what I gleaned the book was about from the publisher blurb

I decided not to investigate the finer points of biographical truth in Michaels’ astonishing novel, ‘this book is mostly inventions’, till I had finished. And indeed at the end of the book the author does reveal what is true, and what might not strictly be true, but may have been pieced together from research and also from creative imagination

Because it trusts the worker’s own senses, not the knowledge locked  away in the lessons and textbooks of the elites, the theremin becomes a revolutionary device – a levelling of the means of musical production

These are the bare bones of the book, a story of a man with a rather remarkable life, but this is far more than a biography, it is of course a work of literary fiction, a gorgeous thing, a meditation on the power of music and art, on politics, on Russia, on love as a compass needle for a life.

I was, often, breathless reading this, particularly those sections set in the gulag

The winter came quickly, in place of fall. I lived only barely, by coincidence. At the end of every workday, wrecked, ruined, we trudged back into the camp. We queued for our evening mean: a morsel of herring, a spoonful of pea soup, bread. Someone might steal the soup or fish, but never the scrap of limp brown bread. The prisoners had made this rule themselves. This is humanity, at the end of the world: the refusal to tear away a piece of bread

I was delighted to be offered this as an ARC from the publishers, via Netgalley. It is already published in the States, but UK publication is not till 16th of July 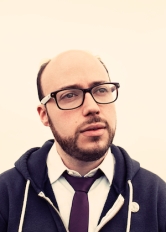 physical page numbers mid text. But the formats included one, strangely apposite one. In place of symbols which might indicate a change of scene or subject matter, a shift of emphasis within a chapter or to indicate page and chapter breaks, was the use of the letter A

A is of course the note the orchestra tunes to, taken from the oboe. This typo sent a shiver up and down my spine, as it rather echoed the ‘true North, or the true note, of Clara, which Termin, in this novel, pitched to, over that complex life

I know i have failed to do justice to this book. It is, sure, a gripping and immersive story. The central character is wonderfully expressed, and the reader rather wants to stay with him, and listen to the narrative and the meaning of his life, as he tries, in various ways, to make sense of himself to himself, and his sense of the world he lives in, both its geography, its politics and culture, and the times themselves. What I found here is what I always yearn for – a kind of beauty. That doesn’t mean ‘pretty’ – beauty, in Yeats’ marvellous phrase, can also be ‘a terrible beauty’ But it will always mean what Keats said

“Beauty is truth, truth beauty,” – that is all
Ye know on earth, and all ye need to know

And finally, nothing at all to do with this thoroughly wonderful book, but I found ithis curious, weird, irresistible Youtube theremin extravaganza It’s certainly not beautiful, and you do have to sit through a speaker addressing the world’s largest theremin orchestra event in Japanese, and break through the boredom of ‘Is anything going to happen?’, but for your unbelieving delectation and delight :