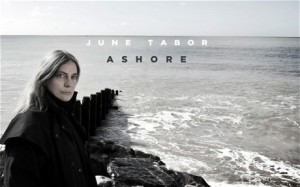 June Tabor’s voice is quite a magical one.  The absolute reverse of technologically manipulated all surface no substance muzak, Tabor sings in a way which draws the listener into their own heart and soul. Her voice is both a clear channel for emotion, and deeply engaged with that. She doesn’t ‘perform’ emotion, she enables the emotion in the music to express itself, rather than expressing her own emotion. Her style is therefore that of surrender to the music and words, so that the listener can engage directly with the music, the language, and the musician serving the music.

I’m a big fan of music which is reflective, and initially was a little disappointed at the tracks which showed another side to Tabor – the French songs, which are more upbeat and playful, and also the tracks, such as the wonderful Selkie, and The Brean Lament, where in part she speaks rather than sings the narration, but I’m slowly coming round to the variety. This is the sort of music which you can imagine listening to, sitting in a snug little pub, somewhere on the Hebridean isles, whilst a storm outside is raging, and Tabor and the musicians take you into the deeps of the sea, and where the sea meets the land.

For me the long opening and closing tracks, Finistere and Across The Wide Ocean, express this most sublimely, and, without anything else, make this 5 star Even if a certain Bank does get in the way a little whenever Tabor sings the word Santander in ‘Finistere’!

Electrification and melancholy benefit from each other

I saw June Tabor and Oysterband in concert when they were ‘previewing’ what would be tracks from this album.

I went to that concert because of Tabor, but ended up also being seduced by Oysterband as well. Tabor’s dark, brooding voice still reaches most deeply and soulfully I think on the very simply accompanied The Hills Of Shiloh, and/but she is equally at home as chanteuse with the driving rhythms of Oysterband, and a more folk rock fusion. From the exciting opening track Bonny Bunch Of Roses the listener is taken unstoppably through Tabor and Oysterband’s John Jones duetting on Joy Division’s Love Will Tear Us Apart and Son David.

Here is that exciting, driving, opening track – which they also used to open the gig – I could barely keep seated!

It’s probably wrong to expect a studio album to quite reach the excitement of a live concert, but Jones’ voice seems a touch more exposed, on piano high notes in the studio, against Tabor’s powerful, but never straining vocals, specifically on Love Will Tear Us Apart. Notes which seemed to be pushed through only through felt emotion from Jones in that live performance here seems almost to be the result of technical strain on Love Will Tear Us Apart, though in the tight duetting on Dylan’s Seven Curses Jones soars freely, and he is beautifully tender with Tabor on the closing track The Dark End Of The Street

However, here is a beautiful, un-strained rendition of Love Will Tear Us Apart filmed at Union Chapel London, which I think matches the two voices brilliantly. A little gem, for all broken lovers

Highlights for me are the excitement of the opening track, the aforementioned The Hills of Shiloh, the dynamism and vibrant excitement of If My Love Loves Me – particularly Ian Telfer’s violin, the folk/religious ballad The Leaves Of Life, contrasting again, the driving, punchy beat and some beautiful acapella from Tabor and Oysterband.

But, hey, on subsequent plays, I found myself adding more tracks as highlights!

Oysterband and Tabor seem to spur each other enjoyably on. My big regret on this album is the non-inclusion of a couple of numbers from the live show – an electrifying performance of Jefferson’s Airplane’s White Rabbit and Velvet Underground’s All Tomorrow’s Parties (admittedly the latter one featured on the previous album with June Tabor , and as they were then called, The Oyster Band, 21 years ago) both proving Tabor can out Nico Nico and out Slick Slick. Her voice is truly amazing, and Oysterband have just the energy to match it. Rock’s loss has been Folk’s gain, with Tabor. She could I think sing almost anything .

I love the dark and painful reflective melancholy of Tabor’s vocals, but the drive imposed by Oysterband’s more urgent music works as a brilliant accelerator to Tabor, and she imposes a discipline and restraint well on them, so the balance point between the two is wonderful, electrifying.