A slow burn, and then the reader is pinioned by ice – with no Wallander in sight 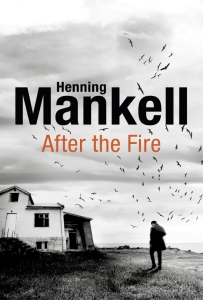 Henning Mankell’s last book, published after his death, is one of several he wrote which were free of the detective genre, though crimes there are, and trying to understand the who and the why is part of the journey made, by the central character, and the reader.

After the Fire takes up a story already followed some years ago, in his 2006 Italian Shoes (translated into English in 2009) This was meant to be a series, I believe, as the book was described as the first in the Fredrik Welin series. This is now the second, and final one, translated by Marlaine Delargy.

Firstly, rest assured, you do not have to have read Italian Shoes in order to understand or enjoy this. I did do so, back in the day, but have forgotten most of it, though I recollected its melancholy tone. Central character, in both novels is retired surgeon, Fredrik Welin. Welin was in late middle age in the first book, retired from his profession after a mishap, and retreated to a gloomy, dark, half resentful half embracing isolation on a sparsely populated island in the Swedish archipelago. His was not a character who handled humanity at large up close and personal well :

The view from the window was the same as the view in many other countries. The densely packed traffic induced in me a feeling of despair about the world into which I had been born and in which I happened to live. What were these people, many of them alone in their cars, thinking? Were they thinking at all?

Mankell has not given us a character to easily empathise with. He is irascible, suspicious, gloomy, self-sufficient and, at the same time, needy. He knows he lacks easy ability to make and keep friendships – though, nonetheless his fellow eccentric island dwellers – all pretty much those preferring isolation to connection, – seem to have affection for him. He is also lustful, and still dreams of a romantic connection, though he feels somewhat foolish for holding these yearnings.

An inexplicable fire in Welin’s home, which appears to have been deliberately started, alarming the community, is the precipitation of a whole series of events which challenge his long, settled into a somewhat grumpy, predictable existence. Firstly, he is suspected of having started the fire himself, in order to make a fraudulent insurance claim. Partly to clear himself, he begins to try and investigate. A local journalist becomes a kind of friend and fellow investigator. Further fires happen in the homes of others on the archipelago. The original fire, completely burning down Welin’s home brings him back into better contact with his difficult, also dysfunctional, adult daughter. The home, after all, would have been her inheritance.

I went up to the counter and explained that I had no bank cards and no ID; everything had been lost in the fire. The clerk recognised me but didn’t seem to be quite sure what to do. A person without any form of ID always constitutes some kind of threat nowadays

Now, this probably does not sound like the most absorbing read – but, if you are someone who likes books about complex, tangled, difficult human relationships, and the challenges, particularly between parents and their adult children, as the ravages of age and time lend an urgency to some kind of reconciliation and understanding – I would say this will be indeed, absorbing.

The ‘crime’ – who the arsonist is – may be obvious to the reader quite early – but the ‘solving’ isn’t the point of the book – it is Welin’s journey, where he must come to understand himself, and others, which matters. After I had settled into the realisation this was not a novel about action, but one of unfolding reflection, I was hooked

Ageing, death, loneliness, redemption, finding a meaning, in the face of there being none.

All, beautifully written. Mankell always one to think into meaning, always writing about wider than individuals

Escapist fiction this is surely not.

I received this as an ARC from the publishers, via NetGalley

It will be published on October 5th