When Memory Turns Out To Be Vindicated………….. 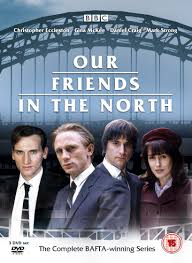 Back in 1996 I was completely glued to BBC’s 9 part drama series, Our Friends In The North, produced by Charles Pattinson, directed by Stuart Urban, Pedr James and Simon Cellan Jones, and scorchingly written by Peter Flannery, based on his original idea and stage version for the RSC in 1982. At that time, I knew it was one of, or possibly THE best TV drama series I’d ever seen.

OFITN, which had had a hugely checkered, difficult, stop-go history at ever reaching transmission at all, for over 12 years, was an examination of British Politics, corruption in local government, central government, the Met, an indictment of class and the North-South divide, far-left politics, old-style Labour, new-style spin, and the rise of Thatcherism. It covered a period from 1964 and the Wilson government, – the `white hot heat of technology’ when Britain was cool and a country of potential, to 1995, when the opportunities offered in the 60s for a more egalitatarian society had all gone, and the politics of a different class had resulted in `there’s no such thing as society’

It was a drama tackling serious issues, but what made it magnificent drama, rather than merely `talking heads analysis’ was that it was based around the lives of 4 working class or lower middle Geordies, a group of friends in their late teens in 1964. Over 30 odd years the friends, two of them on the verge of University or already in academia, one indulged one dreaming of musical stardom, and one blighted by a violent, deprived, alcoholic upbringing, meet, connect, divurge, meet again and follow different ideologies and trajectories. 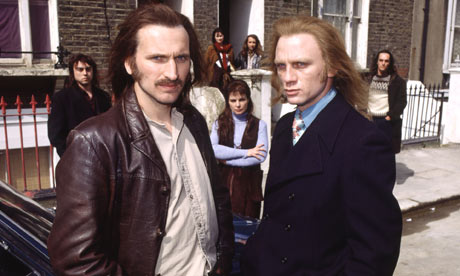 That this still astonishing, still stunning, still thought-provoking and gut punching drama was released onto DVD, is probably down to the fortunate result of 2 of the 4 leads becoming pop-culture stars – Christopher Ecclestone, as well as being known for serious, intense, quality work, – Shallow Grave, Cracker, Jude amongst others – and also the 9th Doctor Who, played the politically focused Nicky Hutchinson in OFITN. But it probably did the fortunes of the release onto DVD no harm at all, that the most emotionally hard-punching, heart-breaking role was given to an unknown, only a couple of years or so out of drama school, called Daniel Craig….For anyone with a complete indifference to Hollywood blockbusters, who has, moreover, been stranded on a desert island without any access to the broadcast media, for the last 10 years, Craig became James Bond in 2005. Geordie Peacock, his character in OFITN is a far cry from the muscle man, secret agent and swoon factor of Bond

Nor have the careers of the two other `Friends’ sunk without trace – Mark Strong, playing wannabe a pop star Tosker – credits include Prime Suspect, Fever Pitch, Emma – his is a solid, working career rather than the stardom which happened to Craig. And Gina McKee (the only genuine North-Easterner of the four) whose Mary goes through the most steady progression into self-awareness and growth of the four, again has a solid rather than starry career (though award winning) and works as much in theatre as media – The Forsyte Saga, The Street, Waking The Dead.

Unfortunately the YouTube upload in sections has rather poor sound quality

A gripping, riveting storyline, based on real scandals around bribery and corruption – T. Dan Smith, John Poulson, the attempt to clean up Soho and the Countryman enquiry into corruption in the Met, there is a lot of sex, a lot of violence, an explosion of wigs and funny fashion to be recollected – and a wonderful, evocative soundtrack of 30 years of music as commentary to events on screen. 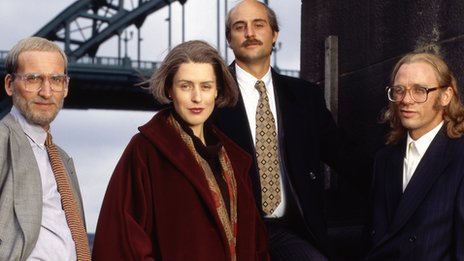 If I were to be a little picky, yes, the `Geordie’ accents of the 3 male friends are at times (particularly in the earlier episodes) a little ouchy, and there are a few technical hitches in sound quality in some scenes which mean that I was rapidly turning up and turning down the volume as the occasional scene descended into something approaching a whisper whilst the following scene boomed out blaringly till the level was taken back down, but, hey, these are minor. And then there are the wigs…but these are as much a pleasure as a pain

However, poor Statesiders, be aware this does not seem to be available in a DVD version outside Region 2 (Europe) so unless your player is all regions or you know someone with an all region player, these delights are not for you………….though you can at least see some of the done in sections uploads on YouTube