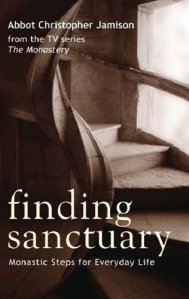 As someone who has a connection to something other than the world of matter being all there is, but has no affiliation to any organised religious doctrine at all, I found this an interesting and thoughtful read on the Benedictine journey of faith.

Firstly, Christopher Jamieson passionately argues that for many reasons we need a connection to something other than the endless striving of consumerism. He is clearly, despite his years in Worth Abbey, VERY in touch with the outside world. There’s a real understanding of, for example, the trades union movement as something which provided something quite powerful in terms of creating a sense of community.

I’ve always had a sense of my own need for periods of silence and reflection. What I particularly found interesting in Jamieson’s book was the earthy practicality of Benedictine ‘Rule’, with a strong emphasis on how each person relates to every other in their community. This is a very humane approach

to spirit, not attempting to force feed the reader into Benedictine or even Christian supremacy, but a clear and compassionate discourse for thoughtful, heartful and listening connection between individuals and as a foundation for society. An egalitarian, not a competitive approach.