Enjoying Zelly with due zeal 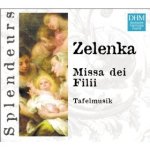 Having recently discovered Zelenka by some chance or other, I very quickly became enamoured!

He is sometimes referred to as `the Catholic Bach’

There is certainly a greater degree of sumptuous opulence in this music than in JSB, and indeed I had many images of gold, red velvet, richly painted icons, stained glass windows and the like fill my mind, as I listened. There is also a particularly, I can only describe it as bouncy, quality to his music – listen to that opening Kyrie, which is almost folksy.

This is music which has a certain earthiness to it, a flesh and blood quality. It never quite leaves the ground, there is some sort of pragmatic, tangible joy, rather than austerity or mysticism (both of which I also love, musically) Here, I almost expect the choir to be dancing with each other, swinging each other round, wearing elaborate traditional high-days-and-holidays costumes (listen to that Gloria!) Most unseemly behaviour in a church – but why not!

This is a delight in the divine, a joyousness. The musical runs in the Gloria made it hard to sit still. Had I heard it in a church setting I’m sure I would have been expelled for bad behaviour, as it would be necessary to skip and twirl in the aisles!

What a very happy and energetic performance of Zelly this is. Reviewer bounces off into the sunshine, skipping and leaping the Gloria!

Here is a website devoted to all things Zelenka – including also the fact most ‘supposed’ images of Zelenka are NOT of Mr Jan-far-from-Dismal at all! Zelenka site