The writer who adored the theatre, by the actor who adores the writer 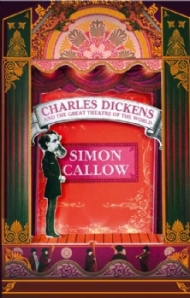 Simon Callow has written a wonderful biography of Dickens, with a specific focus on Dickens adoration of theatre, and the links between the passionate, flamboyant theatrical heart in his writing, and the man who virtually killed himself by addiction to giving all of that passionate heart to audiences, in the punishing Reading tours he gave, both in this country and in America.

I loved an earlier book by Callow, My Life in Pieces, a collection of his published writings from newspaper columns, and remember particularly being struck by the way he wrote about Dickens, who he has clearly adored for ever. There is a pretty good fit between this larger than life, generously natured actor, and the larger than life, generously natured, and adored, writer, social campaigner and performer of Victorian England. I knew a little about Dickens the man (mainly, the details of his early life and the difficulties later in his marriage and his hidden liaison with Ellen Ternan), but the prodigious nature of his energy, and the extraordinarily wide scale of his talent – not just as novelist, but as editor, journalist, fosterer of younger writers, actor, monologuist/performer, director, producer, republican, radical, social campaigner and philanthropist in his life, not only his art, – has been revelatory. Dickens was adored by his public, transcending class, and was clearly a man who lived many lives in one, burning away with prodigious energy which must have been exhausting to keep up with. Emotionally highly volatile, he had close and loyal friendships with both men and women, although as someone with a keen business sense he also had some rather violent breakings of loyal friendships with his various publishers.

Dickens the Performer of His Works

I was particularly interested in something slightly throwaway which Callow suggested, fairly early on, wondering, if Dickens had lived today, whether the particularly febrile quality of his energy, drive, imagination and passion, which lurked alongside deep despair, might not have led to the suspicion of mild bipolar disorder.

This is an excellently researched and written book, but it is Callow’s warmth,
appreciation and passion for Dickens which takes it out of the academic and ensures Dickens get placed not just in Callow’s heart, but this reader’s. And the life of the man, in Callow’s book, definitely illuminates that man’s art. 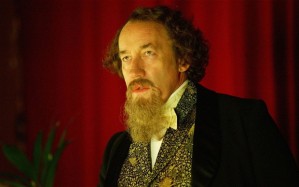 Callow as Dickens courtesy of a Time Lord and the Tardis!

I received this initially as an ARC from Amazon Vine UK, and once again was grateful to fellow blogger and Amazon Viner FictionFan for alerting me to this book in the first place. Here’s the link to her review.

Lynn Shepherd’s eagerly awaited (certainly by me!) second book takes her into a stylish foray of the murky, mucky depths of Victorian society’s sewers, via a clever amalgam of Dickens, particularly Bleak House, Wilkie Collins The Woman in White , Henry Mayhew’s sociological enquiries into Victorian poverty and exploitation London Labour and the London Poor, a gruesome sprinkling of a Jack-the-Ripper foretaste, and all linked together via the omniscient narrator device found in John Fowles’ The French Lieutenant’s Woman.

her book. Not to mention a sly nod, within the book itself, to her own first work, Murder at Mansfield Park. Indeed, her detective within that book Charles Maddox, is the great uncle to the protagonist in this book – also a Charles Maddox. Dickens himself, and Mayhew, make appearances, as does a tie-in to Shelley.

Lest this all sound too much of a literary self-congratulation, with the avid reader of Victorian literature nodding delightedly at what they recognise, rest assured that what we have here is a cracking good murder mystery in its own right, with Shepherd using her interest in, and passion for, that earlier literature, and indeed for the craft of literature, more – how to tell a story – itself, to add depth, richness and sly, inventive humour. This is a succulent plum pudding of a novel, even though some of its goodies may have the reader wincing at Shepherd’s skill in portraying the gruesome, festering underbelly of Victorian London’s `stinks’

I do believe that whilst reading this without a prior knowledge of Dickens, Collins etc al will still be hugely enjoyable, that readers steeped in Victorian life and literature will gain an added pleasure – not least because of the sly, playful way Shepherd takes our conceptions and preconceptions of characters from Bleak House, subtly changing names in some cases, but leaving us with a memory of their `original’ in order to set up expectations and certainties, which may later be overturned. She pulled rugs from under this reader several times, and I enjoyed being surprised and overturned.

There can be no finer accolade than to say she makes me want to re-read the originals, yet again, in order to follow the route of her imaginative inventions from the original texts. This is ‘Charles Maddox 2’
The prequel Charles Maddox 1 is Murder at Mansfield Park
The Sequel Charles Maddox 3 is A Treacherous Likeness (A Fatal Likeness USA)
Tom All Alone’s Amazon UK
Tom All Alone’s Amazon USA
For some reason this is ALSO sold as The Solitary House in the USA. VERY confusing!