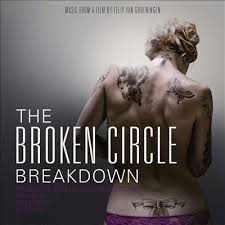 I’m not a genre admirer of bluegrass music, but this CD might make me think I could become one!

Hooked into it on the back of the Belgian film which this is the soundtrack from The Broken Circle Breakdown  I headed over to buy this pretty instantly, worn out by having to go to YouTube, again and again, in order to play trailers to hear tracks again.

So now the music is merrily (and heartbreakingly) playing, and dissociated from those stunning performances in the film where the tracks are in a different, progressive order and each track is telling the story of what is happening for Elise and Didier, I can settle to form a musical relationship with the CD.

This title is one of the purely instrumental tracks, Sand Mountain. Be patient, as the repeated, languid opening phrase, which then hangs silently for a beat or two (up to 44 secs in) then springs into hootenanny toe tappy jig, leaving the listener ebullient with all the steely twangs!

I have focused on the You Tube excerpts of the tearbreakers on my film review, but here is a bouncier vocal and instrumental (Country In My Genes)

Within the film itself my focus was on vocal performance from Veerle Baetens and Johan Heldenbergh. Baetens has a sweet, fragile voice working particularly well on the stick a knife into the heart tracks, though there is a lovely openhearted freshness in her rendition of bouncier numbers like Country In My Genes, whilst Heldenbergh has more textures in his voice, rich, full, even a little rough and burly on the Bruce Springsteen number Further On Up the Road,and lighter, more tender, without the grit in his duets and accompanying numbers with Baetens, as befits the way the music is used to explore their relationship as individuals who sing love songs with each other.

Divorced from the film, it is the quality and texture of the marvellous musicians that I’m now drawn to engage with: the weavings, the riding a horse trot and bounciness of the rhythms of the faster numbers, trotting, cantering galloping Yeeeee —-Haaar! so that sitting to listen is hard, the listener forced to toe tap, arm shake and finally give in and jig and skip. Finally (because of the different order of tracks in film and CD) you are allowed to rest, catch your breath and and hear how tender and soulful Bjorn Eriksson’s guitar, and the viols or mandolines of Geeart Waegeman and Nils de Caster can get. 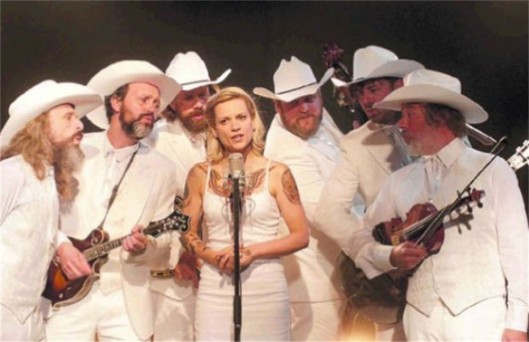 The purely instrumental tracks are a wonder and delight of flying, flirty weavings, call and response, back-chat and breathless virtuosity

Within the film itself the movement of the music is one of steady darkening, the fizz and ebullient, show-off daredevil champagne tracks occurring earlier, and the steadily painful tracks of loss and despair and loneliness inevitably charting the sad journey of the film.

The CD mixes this up , and this is indeed a much better arrangement for a stand alone.

Who knows, I may find myself wanting to don that cowboy hat and become a country gal after all!