I enjoyed this enormously – though I did have a couple of rather – ‘hmm, I’m not quite sure of this’ considerations

The most pressing is this: Given the fact that the First War, starting 100 years ago this year STILL seems to have left its shock waves and fault lines deeply embedded in European history – so that still a fairly large percentage of UK citizens may have memories at least of a deceased grandparent, who either had stories to tell of their childhood and how daddy or uncle this or that or the great love never came back, or were even wounded themselves.

It still feels somehow too near to be married with a detecting murder mystery, however well done.

Ryan is very good at being very direct with the horror and the carnage – from both sides of the trenches, the awfulness of that war, the horrific injuries on both sides, are laid out. And I also like his good writing, strong characters, examination of all sorts of issues – attitudes to women’s suffrage, outrageous, stuffy sexism, the class bound society, the organisation of labour, radicalism, cutting edge (literally), medicine. This is a good, pacy, absorbing ‘what happens NEXT……sort of read. Except that I’m still left with a bit of unease over the reality of that awful carnage hooked up with a murder mystery. Particularly one involving Dr John Watson, the erstwhile recounter of all the Sherlock Holmes casebook stories.

Pause for the sound of Sherlockians sucking in their lips with a hiss of disfavour. Possibly.

Brett and Burke as the detective and the doctor

A better and more closely reading Sherlockian than myself will no doubt be able to verify that in one of the final (if not THE final story) when the great man retires to the Sussex Downs to pursue a bee-related hobby, the getting-on-a-bit Watson rejoins the Royal Army Medical Corps and pops over to France to do his doctoring bit and save the lives of wounded men.

In Ryan’s book, Watson becomes detective, and there are many references, and even a story line, around a dreadful falling out between Holmes and Watson who have now not spoken or communicated for some time (the subject of the fall-out being Watson’s enlisting in the first place)

Now, as far as my memory tells me, there never WAS such a hideous falling-out, and the sullying of that friendship by Ryan, unsettled me, as a travesty. Use our beloved fictional characters if you must, but keep them true to their original creator’s vision.

So……I have knocked off a star because of the two areas of unsettled, very different, snags at my sense of ‘not quite ethical literary behaviour’ .

The writing itself, and the characterisations engage, and I thought the structure of the book, using a filmic cutting device, was also effective. Ryan has a couple of story lines going on, one from the German side of the lines, one from the British, with also another cut into some events ‘back home’. Particularly in the battle field threads, he will take the reader to a cliff-hanging moment at a chapter end, but the next chapter will start with events on the other side of the lines, so you, as reader are left with two ‘what will happen nexts’ to keep you turning the pages. There are also several red herrings and teasers tossed into the salad, some of which are delicious and work very well, some of which are not quite as good, as the insertion of real characters whose real outcomes are well known, mean that some of the ‘what will happen next’ fever is reduced because the reader will know the history.

As the two stories from the lines began to coalesce, some coincidences began to seem a little too neat and inevitable, the structure a little too hastily wrapped, and I began to find this more of a story to be sat outside of, rather than strongly and intensely engaging me.

One final plus for this reader was a quartet of strong, well drawn female characters,

very much representing the movement away from sweetly passive invisible Victorian womanhood.

Despite my criticisms this a book I would strongly recommend, especially to anyone who has a less queasy sense of what is, and what is not, acceptable in fiction!

I’m not normally a fan of Julian Barnes – finding him a ‘clever’ writer, but without much

heart, so that I get a bit tired by his erudition, and don’t engage with his characters.

This was a very different experience (I’m sure partly helped by the fact that Conan Doyle is an interesting, and complex character) The book follows the case of a second generation immigrant, George Edjali, a solicitor, victim of a series of anonymous letters, who ended up being wrongfully accused of crimes – mis-assumptions made on the grounds of his race. (Almost a sort of parochial English lower-key Dreyfus scenario) 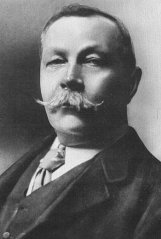 The author of Sherlock Holmes involved himself in the case

I felt a depressing sense that things have not changed as much as they should, as far as intrinsic racism is concerned, and the wilful assumptions made at that time purely because of George Edalji’s colour have continuing parallels.

Barnes’ structures Doyle’s unravelling of the case rather like a Sherlock Holmes story, and this is delicious.

There is also a lovely illustration of the idiocy of racial stereotypes in that the dour Scot (Doyle) is actually a very volatile character – and, moreover, drawn to the mystical and metaphysical whilst the supposedly excitable Parsee is phlegmatic, controlled and rational, and rejects the esoteric practices of spiritualism – though unfortunately his lack of expressed volatility is then further used against him by a society determined to damn him however he expresses himself.