I happened, as one does, on an interesting blog devoted to perfume. The only reason I’m not linking to it, or doing a pingythingy, is because THIS post is actually an anti SYNTHETIC perfumery post, and it might seem it is a post against the perfume passionate blogger – which it isn’t. Though it is a killjoy post about pretty well all modern perfumery, despite my love of aromatics, as evidenced by earlier posts – and rants – wrapped up in reviews of two books by Jean-Claude Ellena

I have become deeply concerned about the fact that virtually ALL perfumery is using synthesised ‘novel’ chemical constituents – this is very different from the complexity of naturally occurring chemical compounds as they arise within the chemistry of a plant.

A fine example is the fact that the fragrance industry has now identified linalool, a naturally occurring chemical constituent in many essential oils as a potential skin irritant, so its use in compounds is restricted to a maximum level. This is because (for example) tests with synthetic linalool isolate showed a potential to trigger eczematous reactions in susceptible individuals 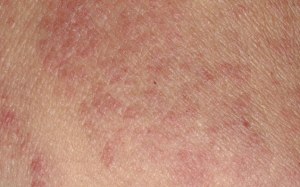 This is now having a (negative) effect on aromatherapeutics as MANY essential oils – including some of those known to be amongst the ‘safest’ – for example, Lavandula angustifolia, true lavender, is high in linalool (Sometimes also referred to as linalol)

And information which tries to equate the synthetic isolate with the whole herb synergy has herbalists and aromatherapists turning quite puce with rage – as the two are not the same.  Linalool rich true lavender is one of many essential oils which may be effectively used in topical applications to TREAT eczema

So what is going on here, and how has a plant which has been used, both aesthetically and therapeutically, for thousands of years, suddenly turned out to have restricted levels in ‘products’ And by the way, I mean ‘thousands’ literally as documented use stretches back that far in herbal texts from classical times, as whole herb use, and also, from a few hundred years later, as essential oils. The invention or re-invention of distillation occurred around the 10th and 11th century by Ibn Sina (Avicenna) a Persian (Iranian) doctor/herbalist/healer/writer of medical texts.

What no one really seems to be getting their heads round is that complex evolved chemistry in a plant is not a chemical in isolation, but a synthesis of hundreds – creating a particular new synergy. Plants (like people) are made of chemical checks and balances to maintain integrity. A particular chemical component may be toxic but may be contained or have its toxicity ameliorated or modified by the presence of other chemicals

A fine example is that. within our own bodies, the contents of the stomach are highly acidic, through the presence of corrosive  hydrochloric acid, which is present to break down foods, particularly as part of protein digestion – however the aggressive and necessary effects of HCl (hydrochloric acid) are moderated by the presence of mucus secreting cells which protect the lining of the stomach itself being ‘burned’ by the acid

So, within plants, there may be aggressive or irritant chemistry which is contained by the presence of other chemicals. It is just not true to say that a plant containing high levels of linalool, like true lavender, has the skin irritancy potential of much LOWER levels of the synthesised chemical isolate, linalool

Perfumery Chemists-behaving-like-gods are creating ‘novel’ chemicals which have never existed before, as well as creating synthetic versions of preexisting chemicals. The situation is further complicated by the fact that although synthetic linalool, for example, and linalool as a naturally occurring compound may indeed have the same chemical formula – the molecules may not have the same shape. How chemistry is utilised in the body is often linked to receptors on cells,with a particular shape, designed to be activated by the presence of a chemical fitting the receptor (like keys in locks) And like keys in locks, the wrong key, or a badly cut key may not only ‘not work’ but get jammed into the keyhole

The above picture of two naturally occurring forms of linalool is a diagrammatic illustration of how the same chemical molecule may exist in different spatial arrangements – and the shape itself will alter various characteristics of the chemical. For example, the two forms of the same chemical compounds even SMELL completely different.

Naturally occurring chemistry has been part of an evolutionary process, species will evolve ways to use or protect itself if it comes into contact with specific chemistry, over many generations. But evolution on that level works quite slowly.

However NO ONE KNOWS  how we are really responding to the new chemistry flooding out into the market place – whether in perfumery, household products, food, atmosphere, industry etc. And we know EVEN LESS how all these individual novel chemicals will react with each other.

Sure you may be able to test for obvious things in cosmetics, like application to the skin, and at what levels an irritability reaction may occur with each chemical, or even the finished product. But, long term? And as many of these compounds belong to classes of chemicals which are related to naturally occurring compounds which absorb into the body via various routes, it is LIKELY that they may well be absorbed into the body, through those same routes, reaching the brain, via the olfactory receptor cells, the respiratory system, or with a partially fat soluble partially water soluble structure, being absorbed through the skin (in cosmetic or perfumery application)

Allergic and intolerant responses have been on the rise for some time, and a percentage of those are from people who are claiming strong perfumes trigger headaches and migraines. In fact there have been some who are trying to stop the wearing of ‘strong perfumes’ in public places and are using some of the arguments akin to those brought up around the dangers of passive smoking. Which of course took many years of known negative health implications and growing statistical evidence before the might of Big Tobacco was overpowered enough to create changes in legislation

To return to synthetic perfumery – It is my own belief that it is nothing to do with the ‘strength’ of the perfume, and everything to do with the pervasiveness of synthesised chemical compounds, both ‘copies’ of naturally occurring compounds and entirely novel ones. That belief comes from the number of people who begin to use only natural perfumes and cosmetic products because they DON’T have the intolerant reactions to these latter products.

In what might seem a disconnect (but isn’t) some years ago we were all deluged by advertising claims that margarine was better for us than butter, because of the danger of saturated fats (primarily animal origin) as compared to mono – or poly, unsaturates (primarily plant origin)

The difference between a fat (solid at room temperature) and an oil (liquid) is that the latter has a bendier, more flexible structure. A saturated fat, like butter, contains all the hydrogen atoms the carbon atoms will hold. Hence, the carbons are saturated’ with hydrogen. Our bodies can recognise and process these naturally occurring substances 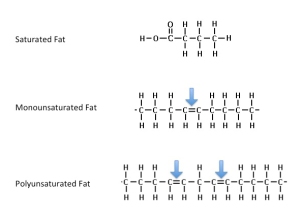 With a monounsaturated fat, like oleic acid ( naturally occurs in olive oil) or a polyunsaturated fat for  example, the Omega 3’s in fish oils, or the Omega 6’s in borage or evening primrose or other seed oils, one (monounsaturated) or more (polyunsaturated) of the carbon atoms in the chain of carbons forms a double bond with another carbon – so it is no longer ‘saturated’ with the maximum number of hydrogens it could hold. The double bond makes the molecule bendier

And still, the body can recognise the shape of these different molecules. However, the process of hydrogenation turning a liquid plant oil into a solid, spreadable fat, effectively, re-saturates them again – except – except the hydrogen atoms attach in a different way. which is not a naturally occurring ‘shape’ and which the body is unable to properly recognise and utilise.

Way back IN THE 50s concerns were already being expressed about health issues related to  ‘trans fats’ where the hydrogen atoms are forced onto opposing ‘sides’ of the carbon. It took 40 years before, slowly, slowly the food industry made changes (were forced to make changes) so that now we know to check our spreadable plant oil-turned-into-fat is ‘free from trans-fats. This time, the Big Food industry were the ones doing the heel-dragging

My rather lengthy deviation into butter versus margarine is really not a deviation at all. We make and use novel chemistry in a rather ‘because we can’ way, without really knowing the effects

Back in the time of the first Queen Elizabeth it was fashionable for ladies to have a complexion which was as white as possible, and lead was used in cosmetics to give the desirable pallor

In fact, our ancestors, knowing less about chemistry, had far more excuse for their ignorance than we do. Watch, as they say, this space (the cosmetics and perfumery industry space) and see what the next 40 years may bring.