Being more than a little tired of the interminable violence-graphically-described-in-titillatory-fashion-against-women which seems to be the clichéd bedrock of some crime writing, I have been turning my attention to some earlier writers, particularly those whose work is literary fiction, subject matter: crime.

And so it was that I discovered the American author Dorothy B. Hughes, 1904-1993. For some reason, Hughes stopped writing, or, at least, was not writing for publication any more by 1963, and this novel, The Expendable Man, was her last.

It has been picked up, and re-published by the ever-excellent Persephone Press. Persephone publish/republish forgotten classics by women, many of them from the early part of the twentieth century. Where they differ from other publishers with a similar intent, is in the individual beauty of their physical books – cover and end-papers, particularly, are wonderfully designed to subliminally, rather than glaringly, hint at the flavour of the book within.

The Expendable Man’s cover is curious – a uniform, (as if trying not to project anything

noticeable, remarkable, out-of-the-ordinary) unbroken grey. The inside covers are a strange, unsettling, oppressive series of compressive, abstract shapes – chocolate brown against a dull, dark turquoise/teal background, with a peppering of white dots. A rather brave choice in all – not alluring, yet, nevertheless, compelling in an odd manner.

The Expendable Man is set in America – Los Angeles to Arizona, in 1963, and is most firmly rooted in the politics of that time. Politics and law both at large, and how they play out within the hearts and minds of individuals.

This was a golden time in America’s view of itself, the American Dream – at least for those who already were the haves of society. America had a charismatic, dynamic young president, championing liberal values, respected at home and abroad. But the times also had (when do they ever not) darker, more sinister undercurrents. 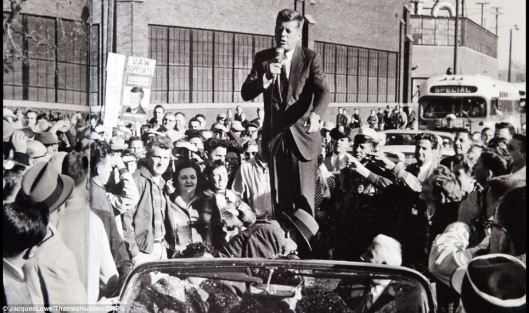 This is actually a book which is very hard to adequately and enticingly review – because there is very little a reviewer can say about it, if they are not to spoil the necessary journey which each reader must make. I’m particularly glad I picked this up without any prior knowledge, except that being a Persephone book, it would be well-written, that it was a ‘golden-age crime’ and that it had been described, on publication, by the New York Times as :

the author’s finest work to date, of unusual stature both as a suspense story and as a straight novel

And, that NYT reviewer spoke truly – this book delivered. Here is as much as I can say:

Hugh is driving from Indio to Phoenix. Against his instincts, he picks up a young female hitchhiker. He knows this is probably not a sensible thing to do, but he is a decent man with younger sisters, and thinks it is better that he be the one to do this, rather than leave her perhaps to be picked up by some other, less decent man. The highway is deserted and dark is approaching. The girl, who definitely looks and acts more than a little aggressively, is clearly someone with something to hide. And appears to be one of the dispossessed poor. And everything moves downhill from there on in. Quite rapidly, and quite unstoppably.

Something about the book is, right from the start, implacably tense and oppressive, even the description (which hooked me immediately) of the landscape, in the opening paragraph :

Across the tracks there was a different world. The long and lonely country was the colour of sand. The horizon hills were haze-black; the clumps of mesquite stood in dark pools of their own shadowing. But the pools and the rim of dark horizon were discerned only by conscious seeing, else the world was all sand, brown and tan and copper and pale beige. Even the sky at this moment was sand, reflection of the fading bronze of the sun

Hugh has something about him. He seems more than a little uptight; more than a little fearful; perhaps, even a little prone to suspicion and paranoia. Yet the reader must accept that he is a good man, and senses that his motivation for picking up the teenage girl is exactly what we are told it is. Hugh’s tension, Hugh’s curious nervousness instantly infects the reader, and we too make the journey, uneasy, and compelled.

More can’t really be said…..but if you are looking for a wonderfully taut, psychologically authentic, brilliantly written suspenseful crime thriller, which will deliver surprising and truthful shocks, and set you thinking hard – do read it. It’s a stunner! Highly recommended

In a rather wonderful afterword, in this Persephone book, which analyses the filmic quality of Hughes’ writing (several of her books were made into films, and she  did work as an assistant on Hitchcock’s “Spellbound”, is the quote below, from a publication where Hughes describes her work method:

The germ or seed was always a place, a background scene. And against that background, there began a dialogue or monologue; whatever it was, a conversation. Then I would begin to recognise the characters. The plotting was the final step; it was people and places that interested me, not gimmicks

All of which rather reinforces the sense of authenticity in this undoubtedly page turning book. Sure plotting there is, but this proceeds at a correct pace. Having set the oppressive opener, that sense of a huge and weighted landscape, the journey of this was pretty well inevitable, and did not really rely on barrel-loads of coincidences.

And…….sorry Statesiders, for some unknown reason this marvellous American writer does not seem to be available on Kindle, YOUR side of the pond, nor is your wood book version the delectable Persephone one.