Argentina and England; music the powerful language of the heart 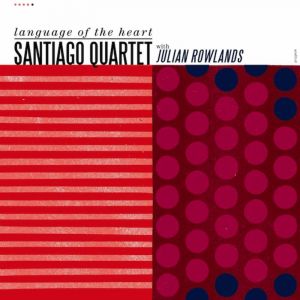 Happenstance took me to a concert given by the Santiago Quartet, some weeks ago. The programme was exactly what is on this CD. Captivated almost from the off, (the strange, almost sax like, edge of sexy, edge of pain violin squeals were an initial shock) I was swept away by the vibrancy, intensity and playfulness of this music, moving without hesitation between rapid extremes of exuberance, ecstasy, mischief and melancholic longing.

I knew nothing of Argentinian composer Astor Piazzolla. His ‘Four Seasons of Buenos Aires’ yes give the occasional nod to Vivaldi’s, but are of Paizzolla’s time and space. This is a fusion of tango, with its insistent rhythms and call to dance, with that inner reflectiveness, – be STILL and listen which is the heritage of classic concert music. That tension between still listening and – no – dance, move, whilst you can – we have such a little time to inhabit dynamic physicality was quite electrifying

The music inhabits emotional extremes, flickering instantly between oppositions, and is both intensely of its place, Argentina, but also draws the inheritance and influences from both classical music, modern classical music and jazz. It is utterly delicious.

So to Santiago Quartet – 2 violins, ( Rowan Bell, Johanna McWeeneey) a viola, (Cressida Wislocki) a cello (Jonathan Hennessey-Brown) – joined on the Piazzolla pieces by a bandoneon (Julian Reynolds) They played with delight, intensity, sensitivity and passion, music which obviously spoke to their heart.

As well as the Beunos Aires Four Seasons, there is an altogether darker and more unsettling piece, Anxiety. I was not surprised, on racing away to buy the CD which was on sale at the concert venue, that this particular piece was one written after the composer had had serious health problems. The track Oblivion speaks both of faith and identity and was written as a film score with connections to a play by Pirandello

The final piece, by English composer Will Todd, could not be more different. The mood is far more restrained, internalised, and infused with both a very English melancholy and a final accepting quietude. This was a piece commissioned by the cellist’s mother. It also moved me intensely, though in a different way. Gone was the need to dance, the yearning was towards something transcendent. 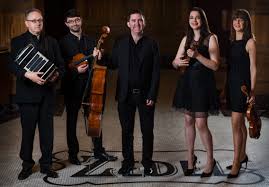 Quartet, after the concert, and not waited to buy later on line – a percentage of the profits bought from the musicians themselves goes to MIND. The cellist, introducing one of the pieces, spoke movingly about personal history with mental health, and the importance of music ‘The Language of the Heart’ Not only the title of the CD, but the place all the music here inhabits, and the place the musicians interpreted from, and spoke from the composers’ hearts, their own hearts, to ours, listening

And…to those who might have noticed my absence – pressure of work, dear hearts, has meant for some time that I have time to read or to write about what I am reading, but rarely both. The amount which MUST be reviewed (those ARCS) is Everest like now, and no matter how much I try to tell myself I cannot open another book without addressing that must-be-reviewed pile, the flesh is weak, very weak indeed. All of us who pride ourselves (alas! pride!) on maintaining our own particular reviewing style and standard just can’t surrender to doing something simpler and less intensive than what we normally do.

6 thoughts on “Santiago Quartet – Language of the Heart”