Not for the fainthearted, or for ostriches 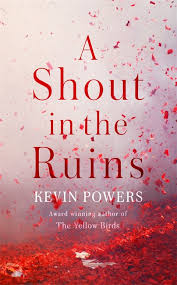 Like many, I had been overwhelmed and lacerated, by the reading of Powers first book, The Yellow Birds, detailing the experience of the war in Iraq. Powers had experienced that conflict, as a machine gunner. That powerful book was far from being any kind of glorification of war. Powers, a wonderful writer, pulls no punches, does not gloss over the awfulness of conflict, or the kinds of glorified lies countries tell themselves to encourage young men to enlist

A Shout in the Ruins, his second book, explores no less important, destructive, shaming themes which should be faced. He looks at racism, and its foundations in the history of slavery in the States, and the long shadow that has cast, and still casts.

Rawls could see up and down the old man’s arms. They were lined with mark after mark of whip and brine, a topography of the passage of time and pain one on top of the other, a map in miniature of ridgeline and ravine going up into his shirtsleeves in an uninterrupted pattern

This is a complex story, taking place over more than 100 years of American history. The central character is George, a quiet, reflective black man. And on his story, traced from the 1860s, George, now in his 90s. moving towards death (so his ‘present’ is the 1950s) is keen to unearth a mystery about his own origins, as an abandoned child. Those origins lie in the stories of those who had cared for him before he was ‘abandoned’ and why, indeed, abandonment happened. A story of slaves before the outbreak of war. In his 1950s present, American is still a segregated society, a society, effectively practising apartheid, in the South. And the continuing story of casual, unthinking, as well as deliberate racism continues beyond George’s death, in the later story of a young woman he meets, right at the end of his life, and her future, which includes someone damaged by one of America’s later conflicts

Whoever said a rifle on a wall was an opportunity for suspense must have been European. As if there would ever be a question of its getting fired or not in America. The gun goes off when the line gets crossed, and the line got crossed a long time ago, when we were naked and wandered the savannah and slept beneath the baobab trees. When is simply a matter of how long it takes to get it out of the holster, how long it takes the bullet to arrive. Perhaps days or weeks or months, perhaps one’s whole life, but these are questions of distance and trajectory, of time and physics, and not of possibility

This is an extremely difficult book to read at times, but it is one which I felt I had to read. As in Yellow Birds, punches are not pulled. Powers does not labour or over describe the awful violence of racism, rather, sentences are casually dropped in, rather like unexpected land mines, leaving the reader shocked and reeling. The throwaway information about a slave who had run away, and, on recapture, his ‘master’ deliberately damaged his feet, so the young man could not ever run away again, but would only be able to shuffle and hobble – still work, but not run

This is a deeply, deeply, despair filled book. There are wonderfully drawn, complex character, some are of a repellent, vicious nature, many are normally flawed, going along almost unthinkingly with the evil which may be the way a society is structured, others question the wrong, and there are those who are like beacons of what it might mean to strive to be ‘human-kind’ But the lives of those the reader cares about will inevitably also be lives that experience pain, loss, grief

Another major theme is the importance of home and community. The book opens with the destruction of property and community by those seeking to ‘develop prime sites’ and spools back to earlier acts of destruction and violence towards community and home, done by those whose only care is the acquisition of personal wealth and power. Powers makes sure we are aware he is not just writing about America’s past, but about all our presents.

I had some reservations. As I found, at times, with Yellow Birds, which changed points of view a lot – whose story was being followed, at any point – I wished he had been a little more linear. At times there are just too many characters to keep track of, and the narrative might have been pruned, shaped more, to allow trajectory of story to be clearer, the strength of his writing itself to shine out more. There was also a question I was left with, which was unanswered, part of the quest George himself was trying to get to the bottom of, but, then, as I continued to think about this book, long after I had finished reading it – life is also full of little pockets of mystery which never do completely get solved

I received this as a copy for review from the publishers, via NetGalley

It has taken some time for me to write a review, as I needed some time, and distance, to evaluate my rating. The length of time the book stayed with me has meant that the reservations during reading itself, retreated

11 thoughts on “Kevin Powers – A Shout in the Ruins”