That deadly atomic race between Allies and Axis 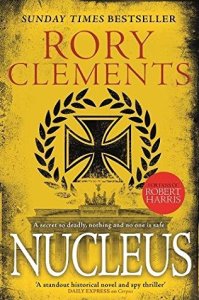 I had very much enjoyed Rory Clements first ‘Tom Wilde’, Corpus, with my pull-back from 5 star happening, as it often does in books where there has to be some physical action , simply because there is often a tendency to overdo whatever version of the fisticuffs – be it by club and spear, or by state of the art high velocity rifle – is going to happen

I’m a bit of a realist as far as injuries to flesh, blood and bone and the like are concerned, and begin to sigh in disbelief when our hero, pumping out blood from an almost severed leg, half blinded by an arrow in his eye, and with a spear thrust just deflected from the heart by a lucky locket bearing a picture of his true-love, none the less abseils down the Eiffel tower, holds on underneath a car giving chase to the baddies and manages to roll away from danger as the car he is hanging underneath is shot in the tyres and rolls over a conveniently placed cliff edge.

The intelligent, twisty turny first book, set in 1936 as war was looking like being on its way, against the background of Edward VIIIth’s possible/probable abdication, and politics polarising to the left and right, had gripped me hard – until the protracted action sequences happened, as the tale reached its denouement and the likeable, interesting academic Tom Wilde mounted his trusty steed (motorbike) and set out on his dangerous and chivalric mission, slaying dragons and the like

I had been quite gripped enough though to jump at the chance to see where Clements would go in Book 2, set in 1939, Nucleus – into the race to develop the atomic bomb, that’s where, and a plot even more complicated by other issues happening, – what should Ireland’s attitude be to war, – is my enemy’s enemy my friend? – but what about the nature of my enemy’s enemy – does that not preclude any friendship? There are, of course, those on the Home Front who have sympathies with the totalitarian right, because it might be a bulwark against the totalitarian left. What should America do? And what about scientists who have defected from Germany – can they all be trusted?

Some of the complex characters and polarised relationships from the first book re-appear here. It would not be necessary to have read that first book in order to enjoy this, but I’m glad I had, for deeper appreciation – particularly of enigmatic Philip Eaton who had appeared in the murder investigation Wilde got drawn into in the first book. Wilde was never quite sure about Eaton, so we are also wondering about him……

Wilde, not a bed-hopping Lothario had had nonetheless an ‘interest’ in the fiercely independent, intelligent Lydia Morris, in that first book. Clements wisely had kept torrid accounts of anything which might happen between the two, at bay. Here, 3 years later, we discover that Wilde and Morris have become an item, though at the moment there is a kind of estrangement of intention, or at least, an estrangement in priorities between them. Its rather grown-up stuff, all down to the priorities which might be demanded of an individual, caught up in world events. Also returning, and with a deepening relationship is Wilde’s rather shambly old Professorial colleague, Horace Dill.

Wilde has recently returned from visiting his elderly mother, back in the States…and, whilst there, has had some rather surprising meetings, with the great and the good, anxious to get more information about what might best serve America’s interests. Demands are made of Tom – so he too is aware that different countries, different classes, different ideological positions – even between those ultimately on the same side, are quite complex

So…….how did this compare to Corpus. I was very pleased indeed that the implausible action man stuff had been reined back. Yes, there is still some of it – popular page turning may well expect it, and there is also a rather treacherous and beautiful woman who makes a play for Wilde. Who, whatever the challenges in his relationship with Lydia, is a principled man and loves her. The treacherous and beautiful one might be a bit of a cardboard cut-out and have stepped out of a James Bond story, but, there is certainly enough real and plausible drama, and satisfying plot twists to make me stay, not only with this, as a recommended read – but be keen to hope Clements still has places to go with Tom Wilde (not to mention Lydia). I shall look forward to following the further adventures.