“We must try to see one another in this way………..As suffering, limited beings”

George Saunder’s 2017 Booker Prizewinning novel ‘Lincoln In The Bardo’ was a read at turns engaging and frustrating. It certainly fits current Booker trends for having something novel and arresting going on stylistically, and for exploring its subject matter in an unusual way.

The central premise sets the individual pain of the loss of a beloved child for a parent, one who occupies a pivotal place in history, against the pain of many, following the carnage of war. The parent is President Abraham Lincoln, whose beloved son Willie died suddenly of typhoid fever, which fatally raged through him whilst his parents were hosting a glittering reception. Such receptions, then as now, were also crucial political events, and as the American Civil War was current, the state of the nation was a serious one.

Saunder’s novel was inspired by a piteous event, piteous image. Willie’s body was interred in a crypt in Oak Hill Cemetery. Accounts and sources at the time record the fact that Abraham Lincoln visited the crypt twice in the middle of the night, cradling the body of his dead son in his arms 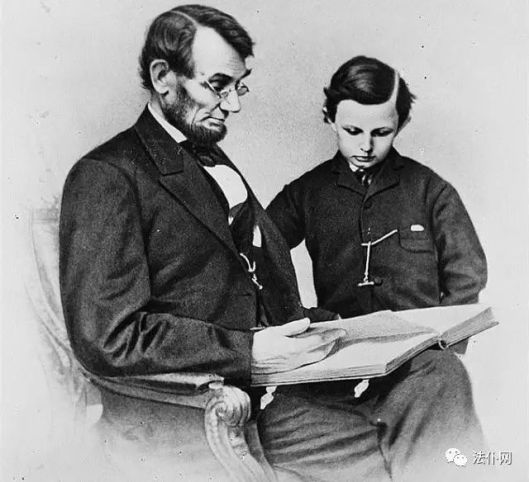 Lincoln with his youngest son, Tad

‘The Bardo’ is a between state, in Tibetan Buddhism, potentially this might be a state of healing, certainly one moving towards some kind of resolution. Here, the between is death, and whatever is to come, after. This might translate as the Christian tradition of Purgatory.

Trap. Horrible trap. At one’s birth it is sprung. Some last day must arrive. When you will need to get out of this body. Bad enough. Then we bring a baby here. The terms of the trap are compounded. That baby almost must depart. All pleasures should be tainted by that knowledge. But hopeful dear us, we forget

Metaphorically, then, the nation itself could also be seen in a ‘between’ –  the conflict of the war itself, which would lead to something else, in the end

The structure of the book is initially complex, though in fact, once the reader accepts it, it becomes clear

Various chapters cite published sources from the time, or from later academic analysis of political events. I don’t know whether all of these are true, because certainly on the digital version, all the citings are within the text, and there is no afterword or bibliographical listing. Some of these texts certainly are real, as I searched for book titles

The bulk of the book is made up of a collection of voices from that Bardo, between state of death, where the dead are still attached to the material plane, and have not lost their desire to return to the land of the living. Spirits – many, inhabit the areas around their own graves, and constantly return to longings for their former lives. Some of the spirits resolve and move on. The spirits dialogue with each other, and there are 3 major voices, representing different times in America’s history.

At the core of each lay suffering; our eventual end, the losses we must experience on the way to that end

It is the shocking, hopeful, strangeness of the living father embracing the body of the dead son which has sent shockwaves through the as yet, unresolved, unaccepting community of dead spirits.

This all offers the chance for the author to explore, in poetic, sometimes very funny, sometimes heart-breaking way, class, race, gender divisions in America. The spirits of the unaccepting dead continue their own individual personalities, unique strengths, unique weaknesses, so there are a crowd of dissenting voices bickering, battling to be heard. 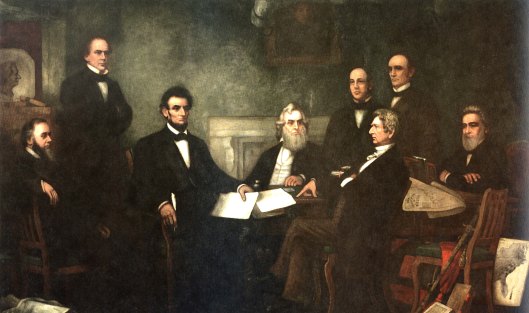 First reading of the Proclamation of Emancipation by Francis B. Carpenter

This is indeed a brave piece of writing, one in which several issues are being explored, but it is not a completely satisfying one, to me. Firstly, I did feel it outstayed its welcome somewhat. To paraphrase the ‘too many notes’ quip for Peter Shaeffer’s Amadeus, ‘too many words’

And, more seriously, there is a kind of ‘wrap’ explaining Lincoln’s Emancipation Proclamation, which seems a little too convenient, a little too neatly imaginative.

But……..despite flaws, a piece of writing which lingers