Two Men In A Boat 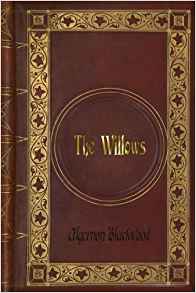 Well to be pedantic, a canoe. It may start out jolly, but for sure it’s far from light-hearted

I read a whole slew of books around the witching end of October, but never got round to reviewing. As the nights are still long and dark, this chilling, genuinely creepy long short story or short novella by Algernon Blackwood should still make a reader shiver, starting nervously as winter winds rustle the branches against the windows

This story opens cheerfully enough. A couple of friends, boating enthusiasts, embark on a canoe trip down the Danube, and all in blissful, balmy weather

Starting out, hugely appreciative of their friendship, the delight in healthy exercise in the open air, the two friends absolutely appreciate the solitude and connection with the natural world which takes so many of us out into walking, running, swimming, or climbing ‘in nature’ What happy endorphins we feel, rushing through us :

Racing along at twelve kilometres an hour soon took us well into Hungary, and the muddy waters – sure sign of flood – sent us aground on many a shingle bed, and twisted us like a cork in many a sudden belching whirlpool…and then the canoe, leaping like a spirited horse, flew at top speed…We entered the land of desolation on wings, and in less than half an hour there was neither boat not fishing-hut nor red roof, nor any single sign of human civilisation within sight

Who has NOT delighted in feeling they are alone, or perhaps with a similarly adventurous companion, out in ‘the natural world’, feeling alive and unconstrained by cities, rules, regulations, civilisations?

And who has not, perhaps, had a sense that a world without (seemingly) other humans, might not be an alien one, perhaps, if not indifferent to us, then having a darker intent

I gazed across the waste of wild waters; I watched the whispering willows; I heard the ceaseless beating of the tireless wind, and, one and all, each in its own way, stirred in me this sensation of a strange distress. But the willows especially; forever they went on chattering and talking amongst themselves, laughing a little, shrilly crying out, sometimes sighing- but what it was they made so much to do about belonged to the secret life of the great plain they inhabited. And it was utterly alien to the world I knew, or to that of the wild yet kindly elements. They made me think of a host of beings from another plane of life, another evolution altogether, perhaps, all discussing a mystery known only to themselves

Algernon Blackwood is utterly brilliant at the inch by inch turning up of terror and horror. There is nothing overdone here, nor is too much debunked by explanation. Instead, he taps into something quite animal and primeval. We might be able to laugh off ancient fear and awe of the wild, safe within crowded cities, but it lurks, oh how it lurks, for anyone with a modicum of imagination. Wiki Commons – Is There Anybody There…There..There?

And I must confess, for some days after reading this magnificent tale I felt a little

uneasy, even walking beneath the tame trees in my local park. Might they, just, be plotting…….

And….I was alerted to this excellent ghost, ghouls and things that go bump in the night – even on a summer’s day, gem, by Fiction Fan, and read it as All Hallow’s Eve harrowed. Here is the link to her enticing review

14 thoughts on “Algernon Blackwood – The Willows”