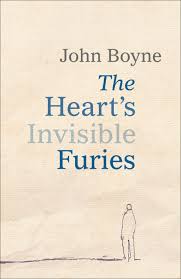 John Boyne’s beautifully titled ‘The Heart’s Invisible Furies’ reminds me not a little of William Boyd’s Any Human Heart/ The New Confessions. A central character, fictional, with some connections to the artistic world, is taken through a lifetime’s sweep of cultural and attitudinal shifts, often around personal relationships. The individual life story is set within the wider story playing out. Fictional characters within the book, who are artists of some kind, with a body of work, are nudged by comparison with real works, and ‘real named characters’ flit through on the sidelines as passing players. This gives a hook to make the reader feel they are reading ‘reality’ rather than the fiction they are actually reading, but the ethics of making ‘real’ characters do things they didn’t do, is not transgressed, as the ‘real people’ are left as minor, background, chorus.

There are a couple of important characters in this book, written about at length, both of whom are writers, and though I did know these were ‘fictional’ their work was described so well, and their history and psychology seemed so authentic and believable that I did have to Google their Wiki pages, and search for the titles of their works on Amazon, laughing at my foolishness whilst I did so.

The Heart’s Invisible Furies takes place primarily in Ireland, but also in the Netherlands and America, from 1945-2015. It follows the life of, and is narrated by, Cyril Avery, the adopted son of a rather unusual couple, the writer Maude Avery and the successful (but sometimes fraudulent) financier Charles Avery. Maude and Charles are both self-obsessed, eccentric and larger than life. They are not cruel parents, though they are rather indifferent and laissez-faire ones, absorbed in their own pursuits. Cyril, narrator of this story, begins his first person narrative at the age of 7, in 1952, a rather shy and lonely little boy. He has, from this early age, even without quite understanding its importance, had a kind of falling in love with a much more extrovert, defined and assured little boy, whom he briefly meets, the son of Charles Avery’s solicitor.

Friendships and loves, sometimes in the unlikeliest of guises, are going unfold across a lifetime, in a kind of tapestry of many colours and textures in this book : tragic, heart-breaking, joyous, accommodating, kind, bitter, reconciled, and at times amusing and surprising.

However……Cyril’s story starts before his birth, when he is still in his mother’s womb, and he does not learn this part of the story till he is in late middle age, when it is recounted to him. This is the story he tells us, in reflection, and it starts the book, with surely a most wonderfully hooking, seductive paragraph :

Long before we discovered that he had fathered two children by two different women, one in Drimoleague and one in Clonakilty, Father James Munroe stood on the altar of The Church of Our Lady, Star of the Sea, in the parish of Goleen, West Cork, and denounced my mother as a whore

I was utterly hooked by the rhythms of that opening sentence and by the carefully exploded bombshells, and had to read on. Nor was I disappointed. Here is a writer, a story teller, who bowled me along for nearly 600 pages, and the journey itself, long as it was, did not seem so. It was a full, eventful one; a grand one

Pulling me back for complete 5 star surrender: very late in the day, Cyril turns out to be a dry and witty man, particularly in conversation, not something he had displayed much of earlier. This did feel, a little, as if the writer had felt the need to inject some wit, humour and banter in the dialogue as we neared the end of the journey.

If I’m being hypercritical, there are a lot of coincidences which drive encounters and plot along – though I must say Boyne manages them with wonderful charm. I think this is because the reader (but not the central character) is kept aware that there will be meetings and connections which will drift in and out until their final connections become clear to Cyril, in the patterns of his own story. The sense of it seemed to me like some courtly, formal dancing in sets – partners change but all will meet again as the dancers move around the circle, and down the line of sets. And like this kind of dancing, there is a joy in the lovely pattern of changes, repetitions, and the form itself. 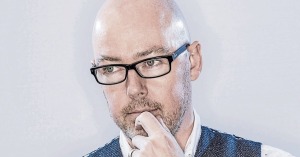 This is a book the reader can happily lose themselves in. Lock the door, take the phone off the hook, ignore interruptions, they will only annoy

I was delighted to receive this from Amazon Vine UK