“Lives only have meaning if we can fulfil these three destinies: to love, to be loved, and know how to forgive” 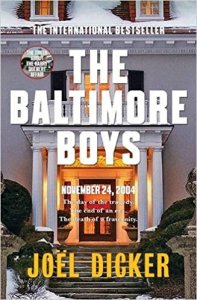 I had been captivated by Swiss writer Joel Dicker’s first book, the runaway critically and reader acclaimed The Truth About The Harry Quebert Affair – both a murder mystery/investigation and a book about writing, writer’s block and matters literary. So I was delighted to be offered his second as an ARC, here translated from the original French by Alison Anderson.

The Baltimore Boys stands as both prequel and sequel to ‘Harry Quebert’. The central character Marcus Goldman (the writer of Harry Quebert) looks back to the original genesis of his writing inspiration – his childhood, and his friendship with his cousin Hillel, and a less privileged boy, Woody – the Baltimore Boys, and in present time, he has already published ‘Quebert’ and, once again, is finding the process of writing hard.

In fact, he has taken himself away from the distractions of the city (New York) to a quiet, suburban house in Florida, where his neighbours are affluent and retired, and nothing happens. He is in search of tranquillity to help the creative juices flow.

A chance encounter with a stray dog causes Marcus’ boyhood, as a third member of the Baltimore Boys gang, to come flooding back to him, as the dog’s owner is a significant figure from his past.

Marcus was the only son of the ‘Montclair Goldmans’ . His father Nathan was the less successful Goldman Brother. The star brother, and the one whom Marcus hero-worshipped, along with his beautiful wife Anita, was Saul. Saul and Anita were wealthy, golden, successful and admired. They and their only son Hillel were the Baltimore Goldmans.

However, as we discover, at the start of the book – the Golden Baltimores somehow became mired in tragedy. Jumping back and forth in time-frames from 1989 to the present day, Marcus is writing his past, his present, and, perhaps his future. This book, The Baltimore Boys, will be a celebration of the people he loved whose lives were less blessed than he thought, and will also be a way to come to terms with accepting loss, and broken illusions.

I loved ‘Quebert’ though at times I found it a little over tricksy. Baltimore Boys, despite all the jumping back and forth in time, seems a much more traditional progression – Goldman lets us know what he intends to reveal to us, before we ever get there – the books very first sentence, its prologue, tells us that in 2004 his boyhood friend, his adopted cousin Woody, is about to start a 5 year prison sentence the next day. We are then immediately taken to Part One, which begins in 1989, The Book of Lost Youth.

I found The Baltimore Boys intensely moving. Marcus, for all his acclaimed fame, has a kind of bruised, attractive diffidence, and a much greater warmth and integrity than he believes he has. This is both a love story, a loss story, and a celebration of the importance of friendship, and of family, those difficult, sometimes impossible ties between siblings and close kin.

And it is full of delicious observations. The back and forth time frames also pinpoint subtle and not so subtle changes in society

There was a time when astronauts and scientists were the stars. Nowadays our stars are people who do nothing and spend their time taking selfies or pictures of their dinner

Above all, Joel Dicker knows how to tell an old story, the rite of passage from child to sadder, wiser man, freshly and engagingly 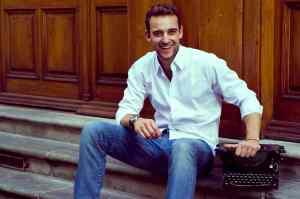 The Baltimore Boys will be published in English on May 18th It has already been a popular success in the original French, published in 2015, and in Spanish translation.