Book Review, Costa Shortlist, Maggie O'Farrell, This Must Be The Place 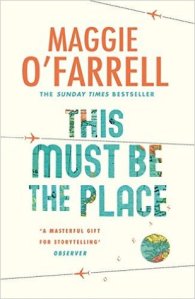 I had to stop, many times, in my reading of Maggie O’ Farrell’s stunning “This Must Be The Place”, because it ached my heart too much, and took me to the places, which we all have, where life and living seems so fragile, so caught on a pin-point of bliss or desolation, where the realisation of the wonder and despair of who we are, have been, might be, overwhelms.

Sorry for the purpling prose, but that is the overview of how the book spoke to me, particularly as I neared the ending, realising that whichever way that fell out, it would be hugely intense. I hoped so much that she would manage the balance point and not tip into something disappointing. She did, and walked that fine rope brilliantly, all through

So, to the more dispassionate, cooler ‘what is it about’ stuff

The overall theme is the trajectory of a relationship (aren’t most books, somewhere?)

There are many central characters in this book, and O’Farrell gives most of them narrative rights: the story is told over a long period of time, cutting backwards and forwards in different voices, at different times within a lifetime, and from different countries. Don’t expect linear narrative, but surrender to the cutting from voice to voice. This is not confusing, a link back to who the new voice is, how they might connect to a previous voice, will come quickly. What the structure gives us is a spider web of connection, fine, fragile and also with tensile strength.

I find myself unwilling, in this review, to name the most central characters even, because when they meet, they are not without history and the snarled tangles that come from their before. We are all shadowed by our prior selves, imprinting on the present. I feel lucky enough to have come to read this without really knowing much about it – except that I did know it was the story of a failing relationship, that it was a Costa shortlist, and that the author was O’Farrell, As I have read earlier books by her, I was willing to jump into the unknown. It was a real pleasure to read without the map of pre-conception, hence – no names, no pack-drill!!

Bolivian Salt Flats, a profound location at one point

Some of the narrators are first met as children, at their own early stages in the story. I have a particular fondness for writers who can get inside child mind, and engage with the truth of those voices. The fact that O’Farrell does was the sure hook to keep me reading – particularly as it is not just the child voice she manages – but individual children, finely differentiated.

A thousand teenagers are pouring out of the school. Once through the bottleneck of the doors, they break, regroup, and bond as groups of three of four. They call to each other in their particular argot: pure Home Counties cut with Teen American. A lot of yips, heys, elongated vowels. They swing bags through the air. Hair is flicked, stroked, tossed. Trousers are worn tight but low; shoes unlaced. The females link arms with their chosen peers; the males perform mock-violence upon those they recognise as their tribe. Most, if not all, display what I think of as ‘the screen hunch’: head bent, eyes down, one hand engaged in fondling, stroking, manipulating a phone

She took me inside the mind of every narrating character, the why of them, the who of them. And it is to her credit that with each voice and chapter change I was loath to leave the chapter I was leaving, wanting to stay with that story, but, instantly was inside fascination with the next voice.

And all the while they continue a conversation above her head:
– He was like, whoah, and I was like, yeah
– Totally, totally out of it. And I mean. Out. Of. It.
– Because she gave me this look and I was just, you know, hey

Lest this all sound not just ridiculously woolly, but also far too intense for words, she is well attuned, as a writer, to the needs of variation, light, shade, humour. Here is a lovely excerpt, inside the mind of a minor character, a counsellor for ‘problem children’ because of their behaviour in school. He is waiting to meet a new, referred pupil for the first time, and skim reading their background notes. The assured blasé professional’s assumptions are, the reader knows, in for a wonderful puncture, and I was giggling all the way. This is no spoiler, as, by the time you get to this point, you, reader, will be in on the joke, waiting for the banana skin (No names, no pack drill, remember!)

He grabbed the file from his in-tray, swallowing an unchewed hunk of hummus-clogged bread, and flipped open the cover…..He let his eye travel down the page as he took a swig from his water bottle. Lives in Ireland….attended this school for a year…..the counsellor’s ey was caught by one particular detail: Previous schools attended – none. He sighed and his head gave a single shake. He took a dim view of home-schooling. He turned his swivel chair and stood up. A child – he opined, to an audience comprising his bookshelf, a watercolour of a Scandinavian lake, a Newton’s cradle, his effigy of a Yoruba deity picked up a long time ago on a gap-year placement – is a social being….The counsellor crossed the room, pausing only to light a candle on the mantelpiece. He had a handle on the session to come now. He felt inspiration, confidence, assurance surge through him. He loved this job, he loved it……He pictured the child who would be waiting beyond the door, in all probability, nervously, fearfully, perhaps covering these emotions with the rough façade of teenage bravura. Ireland the file had said, so the counsellor imagined the offspring of some Celtic hippie types. Auburn dreadlocks, a whispery Irish inflection, dressed in hand-felt and hemp, that particular brand of drivelly, directionless, formless home-schooling written all over him. Couldn’t read until he was eleven, could barely count, even now. He, the counsellor, would bring him out of himself, give him that direction, inspire him to exert himself in more mainstream educational channels, show him that there are other ways to live, besides weaving one’s own clothes, straining one’s own cheese, splitting one’s own logs.

The counsellor flung open the door to welcome this waif, this refugee, this victim of over-parenting…….

I hope this excerpt shows how O’Farrell can construct and build and shape – and clearly has a fine sense of the narrative, the dramatic voice. As well as all the wonderful psychology, dialogue, fine writing, playing with time, place, voice, she remains that wondrous thing – a storyteller 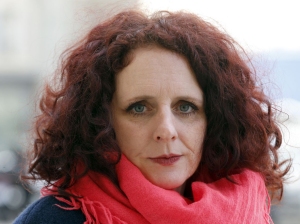 I received this as a digital review copy from the publisher, via NetGalley. And how I enjoyed carefully unwrapping it to follow its treasure journey!

As I hope is obvious, unreserved recommendation