Dark, twisty and immersive, just as the reader expects from Tana French!

For those unfamiliar with her writing, she is a literary fiction writer, subject or territory, crime fiction. Where her lit fic credentials are clear is not only in the excellence of her writing itself, but specifically because it is character and relationship, not to mention the fact that her books have larger themes than the particular story unfolding, rather than plot which is the driver. However, for sure she knows how to keep her readers turning pages, wanting as surely as her detectives do, to unravel the crime. However – if your wish is for a speedier whodunit, howdunit, whydunit, her books might be less grippingly pursued by crime fiction fans, as the dead ends and the solves going nowhere, not to mention the turning towards solutions and the ratchet of tension take their time.

For those who are already firm French fans, this is one to be hugely enjoyed, even if, for this reader, it does not quite touch the giddy heights of Broken Harbour and The Secret Place, books 4 and 5.

As in all her previous books, there is a crime, and that crime will be much more than it seems. Though it will be a murder which has happened to an individual or individuals, the crime will have echoes which happen wider, in the cultural time and place it arose within. French’s original approach is to follow a particular detective or pair of detectives in each book. It is as if the entire Dublin Force is like a chorus, out of which the leading player or players will emerge, and through their investigation, the reader, their colleague or colleagues and the central character themselves, will gain self-knowledge, often painfully

The Trespasser begins with the investigation of what appears to be a murder due to domestic violence. Aisleen Murray, a single woman, but with the table set for a candle-lit dinner a deux, appears to have been punched in the face and hit her head on the fireplace as she fell backwards. Identifying her projected dinner guest, easily done, would seem to nail the suspect. Except, of course, that there is a more tangled trail to follow.

The centre stage detectives in this one are the two from her previous book, The Secret Place. Antoinette Conway and Steve Moran, unwillingly working together for the first time in that book, are now an established professional pairing. Sort of. Both have their histories. Conway, the senior, is wrong, or has always been made to feel wrong, on several counts. Firstly, her gender. Secondly she is mixed race, possibly of Arabic, possibly South American origin – her birth certificate says ‘father unknown’. She is a fighter, bitter, angry, does not suffer fools and takes no prisoners. To say she has chips on her shoulders is an understatement, but the chips have arisen from experience – particularly from the misogyny, overt and covert, from others in the squad. Conway does not need people to like her, or that is what she projects.

Moran is very different, charming and a people pleaser, but there is a suspicion, and some background, which shows him to be hugely ambitious and possibly not above using charm to advance his career. That was certainly what Conway thought of him when they first started working together. The two are a natural for a hard cop soft cop pairing. The cynical, distrustful Conway – who is the first person narrator of this, and the much smoother, emollient seeming Moran, have formed a professional working friendship and respect for each other, unlikely though that might seem for both of them. It has partly formed from the excitement both feel, and the ambition both have, for being detectives in the murder squad. Or, in Conway’s narration:

Murder isn’t like other squads. When it’s working right, it would take your breath away: it’s precision-cut and savage, lithe and momentous, it’s a big cat leaping full-stretch or a beauty of a rifle so smooth it practically fires itself. When I was a floater in the General Unit, fresh out of uniform, a bunch of us got brought in to do the scut work on a murder case, typing and door-to-door. I took one look at the squad in action and I couldn’t stop looking. That’s the nearest I’ve ever been to falling in love

And, perhaps the trajectory of this book is a kind of love story going wrong, a devastation of love. Conway is well past seeing anything through rose-tinted spectacles. Her acerbic dismissive view of the world and most of those in it is clear, even in her first thoughts about the murder victim

She’s on her back, knock-kneed, like someone threw her there. One arm is by her side; the other is up over her head, bent at an awkward angle. She’s maybe five seven, skinny, wearing spike heels, plenty of fake tan, a tight-fitting cobalt-blue dress and a chunky fake-gold necklace. Her face is covered by blond hair, straightened and sprayed so ferociously that even murder hasn’t managed to mess it up. She looks like Dead Barbie

Something I’m beginning to see is a pattern in French’s very different books, is that the crime her particular detective is investigating will be something of a catalyst for them – there will be something which will push the investigator’s button big time, some kind of psychological resonance.

I just hope she is well along in writing book 7, and am wondering who will make their way out of the chorus in that one

I originally ‘found’ French thanks to a couple of bloggers, firstly Jane of Beyond Eden Rock, but who at the time alerted me to Broken Harbour on her earlier blog, Fleur In Her World and secondly, Cleopatra at Cleopatra Loves Books who seduced me into chasing down The Secret Place. Now I’m needing no urging and at the front of any queue baying for a new Tana French book! 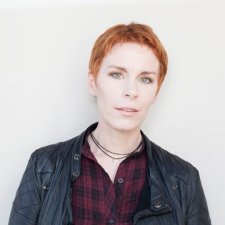 I received this both as a review copy from Amazon Vine UK and as a digital review from NetGalley. This review will hopefully whet interest – the book is published on 22nd September in the UK and on the 4th October in the States

13 thoughts on “Tana French – The Trespasser”