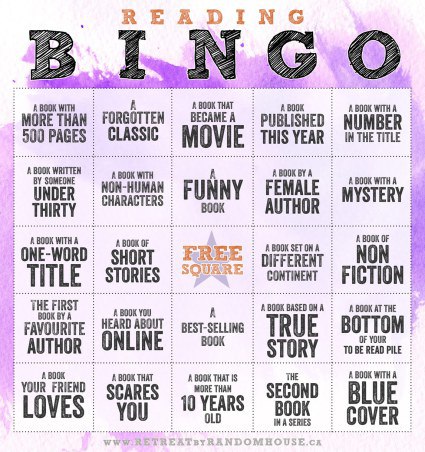 Now how can I resist the lure of this, particularly as I can use it to add in all those great books which got squeezed out of my top 10-but-as-I-can’t-count-became-11. I have studiously avoided, with one exception any books which made my ‘best of’ .

Curiously/fortuitously pretty well all the categories had appeared in the PopSugar challenge, so, by nearly completing that, I could mark a full card on this

Over 500 pages for Norman Collins – London Belongs To Me. This 700 pager, London on The Home Front in the Second World War is a good old fashioned book, and nods to Dickens

A forgotten classic gives Austrian writer Stefan Zweig his place with Beware of Pity, published in 1939. Unsurprisingly events at home meant Zweig had wisely left his homeland some years earlier

It took an ex-pat Brit, long resident in America, to bring Tessa Hadley to my attention. Published this year The Past may be my first Hadley, but it won’t be my last. She is definitely an ‘understated’ writer – that is, trusts the reader’s intelligence

Patrick Hamilton’s Twenty Thousand Streets Under The Sky is for sure a book with a number in the title – actually, it is a trilogy. Not to mention a TV adaptation. He could have happily filled over 500 pages and forgotten classic slots too! He made my best reads of 2015 with another title.

Colette’s extraordinarily racy book, given its 1900 publication date, was published when the author was 27. Claudine at School, my entry for a book written by someone under 30 could equally well have gained the movie and the funny and the forgotten classic slot!

I had never read The Wonderful Wizard of Oz and only did so as part of my ‘Reading The Twentieth’ long term challenge (published 1900) Although the central character is a little girl, a lion, a scarecrow, a tin man, several munchkins and the like give it status as my book with non-human characters. To be honest, it wasn’t my favourite in this category – that belongs to my re-read of Kenneth Grahame’s much more wonderful Wind In The Willows. But as I didn’t write a review, just basked in the book, Baum gets the slot

Another re-read, and what a delightful one, gets my ‘a funny book’ slot – though it also qualifies in my mind as perhaps a forgotten classic. Dodie Smith, she of 101 Dalmatians wrote the delicious I Capture The Castle. Judging by my ‘comments’ on the post, a lot of us have fond memories of this, reading it in our teens. I suspect the humour gets better and better as the reader disgracefully ages

So many brilliant books by so many brilliant authors. I’m delighted to get Marianne Wheelaghan’s The Blue Suitcase in as my book by a female author. Though I rather resent the category which seems to suggest books by females might be rare! The Blue Suitcase, loosely based around Wheelaghan’s mother,growing up in Germany in the 30s, was one which gave me much heartache not to include in my ‘top 10’ of the year. Had I done a top ten fiction, it would have been there. It occupied my thoughts for quite a long time after I finished reading. Always something which I value.

I got a lot out of Claire North’s assured time-jumping, body-jumping SF-ish, Triller and Suspense-ish, Lit-Ficcyish invention. The First Fifteen Lives of Harry August had me reading through the night feverishly wanting to solve the many mysteries.

I’m a huge fan of (well-written) books about espionage, fact and fiction. The idea of leading a double life would fill me with impossible to handle anxiety. The fact that some people do, for various reasons, interests me. Simon Mawer’s sequel to The Girl Who Fell From The Sky, which I read a couple of years ago, is Tightrope my highly recommended one word title book

Short stories are often something I have some reservations about. Rose Tremain is an author I much admire. And The American Lover had me delighted with nearly every story in this collection

Rebecca Mascull’s second novel was another book which absolutely would have made my Top Ten if I had gone the ‘Top Ten Fiction’ route, instead of a mixed top ten. And leaving her wonderful Enlightenment set Song of the Sea Maid just out of the combo top-ten was a very hard thing to do. So she gets the central ‘free choice‘ slot here

Brian Payton’s The Wind Is Not A River was set during the Second World War, in the Aleutian Islands, part of America’s Alaskan territory, which was invaded and occupied by the Japanese army. Which most Americans  were unaware of at the time, a very secret war. And, as I live in the UK, Alaska definitely qualifies as a book set on a different continent

Peter Doggett’s 125 years of popular music Electric Shock was an utterly absorbing book. Not just music, but also social history. It gets the non-fiction slot, though non-fiction books have also been slotted in in other spaces!

Tana French. Oh, Tana French. Now, I first encountered her with her fourth book, recommended by a couple of bloggers. And pretty quickly went on to her fifth book, also recommended by those bloggers.  (Since you want, rightly, to know WHICH bloggers : Jane from her previous blog FleurInHerWorld for Broken Harbour and Cleopatralovesbooks for The Secret Place ) And, what do you know, Ms French hooked me and wouldn’t let go; within 6 weeks I had read everything she has written. Her Dublin crime series is magnificent. So Tana French is clearly an author I love and this book is therefore the first book by an author I love:  In The Woods What all her many fans are shouting, screaming, stamping their little feet crossly about is when will number 6 appear, when? WHEN, Tana???

To be honest, most of the books I now hear about are books heard about online. But I’m delighted to use the slot to further push another book it really hurt to exclude from my Top Ten of the year. Jasmine Donahaye’s Losing Israel explores the complexities of the conflict between Israel and Palestine in a very personal way

I enjoyed Sarah Water’s best-selling The Paying Guests with some reservations. I suppose I might have included any one of Tana French’s other books as an unreserved best-seller recommendation, but I’m trying to avoid author duplication here, or duplicating anything from my top ten list which was yesterday’s post!

Paula Milne’s well-written Circling the Sun, my entry for a book based on a true story slot, is another with reservations – mainly because she plays a little fast and loose with this account of the aviator and horse trainer Beryl Markham, as I discovered when I did a little more research into Markham. I have a slightly uncomfortable feeling around biographies as fiction when the impression given to the reader is that this is more biographical than it really is. It feels as if a life has been tampered with, and I would have preferred it if Milne had come clean and clear at the end about what had been invented.

Back to a book with not a whisker of reservation about its inclusion – except, with no apologies, to state this has already appeared as one of my firm top ten. Richard Yates’ extraordinary Revolutionary Road was indeed a book at the bottom of my TBR pile. I had bought the book 4 or 5 years ago following a strong recommendation by someone who had given me some other great reads, mainly non-fiction. But following one or two fictions which hadn’t worked for me, I thought this book might be another one such, and it rather slipped off the radar, till an impassioned review by FictionFan pulled this book out from its languishing place at the bottom of the pile to become possibly THE book of this year.

Andrew Michael Hurley’s The Loney is a book that scared me. And it’s brilliant. And scary………….

J.D. Salinger’s FAR from forgotten classic, The Catcher In The Rye which I re-read this year is my book over 10 years old

Jane Smiley’s Early Warning is the second book in a trilogy of books looking at 100 years of American history. I enjoyed it enormously, but can’t quite work out why I’ve dilly dallied over getting the final volume

And finally, to finish my card, is a book with a blue cover. Where I’m Reading From is one of two thoroughly enjoyable books by Tim Parks which I’ve read this year, all about reading, writing, reviewing, publishing and, indeed the all the vexed philosophical ideas you may have about why on earth you, me and our species ever read at all, read in the past, currently read, and may (or may not) read in the future

Having completed my card its time to do wings avoiding work, building muscles for some hefty tomes on the agenda for 2016