“The salt wind from the sea”

I must have read Rebecca at least twice, over the years, the first time in my teens, and have seen the film also at least once, but reading it again after many years is a bit of a revelation.

I’m amazed that the very obvious homage to Jane Eyre did not strike me when I read it previously, because this time, that came into clear focus – no doubt helped by the rather excellent forward by Sally Beauman, in the Virago Modern Classics version I recently found in a charity shop, and snapped up, thinking a re-read would be a very good thing.

Now I always knew that du Maurier was a good writer, as well as a popular one, but, again, my re-read this time absolutely underlined how good she was. Freed from any ‘what happens next’ I soaked up structure, atmosphere, and could not help but compare this book to the sometimes relentless ‘psychological thrillers’ subgenre which burgeons on the bestsellers. Rebecca is a literary fiction book, surely, and it’s easy to see how Hitchcock was enamoured by her wonderfully structured, tellingly visual, darkly sub-textural visions

From that wonderfully brilliant, evocative opening line and paragraph, to the masterly ending where she trusts her readers, so that there is no need to spell out, as though to a child, exactly what has happened, but expects that the reader will connect the little clues, the phrases, and complete the picture themselves, she kept me close and spellbound on a disturbing, unsettling, dreamlike journey, almost skating over all sorts of myths lying beneath. Not only were there the clear nods to Jane Eyre, the scary archetypes of female madness, the charismatic, domineering older man – but I thought also of Bluebeard.

I won’t spell plot, in case, despite this book’s perennial popularity, a lucky person who has never met it happens on this review, but something which struck me forcibly on this reading is the rightness of never naming our narrator, despite the fact that Max de Winter informs her that she has a lovely name. The second ‘Mrs de Winter’ is remarkably unformed. Here is where the young, innocent, exploited ‘companion’ to a spoilt, rich, emotionally unintelligent woman, differs from the innocent and also sometimes exploited Jane Eyre. Jane may be gauche at times, but she has such a clear sense of herself, such discernment. Mrs de Winter has no boundaries, she has incredibly fine empathy and ‘feels the feelings’ of others, but she lacks a healthy and resilient sense of self-worth. She is almost like a mirror-image, or extreme opposite of Rebecca. In this book, we have not one, but I think two (and of course three, if you count the fearsome Mrs Danvers) women with some kind of psychological flaw. Rebecca, the charismatic, is deeply narcissistic, and has boundaries of steel and rock. She is invulnerable to the needs of others. The second ‘Mrs de Winter’ deeply imagines and inhabits what others are feeling; so much so that she loses herself. The other archetype which is played out, is that of Svengali/Trilby – almost anyone can be the second Mrs de Winter’s Svengali – Rebecca’s pervading presence, Mrs Danvers, Maxim, Mrs Van Hopper, and she is manipulated with ease.

And of course Trilby was a work of fiction written by du Maurier’s grandfather, George.

Although I can’t read this as part of my ‘Reading the Twentieth’ challenge, as I am still firmly stuck in 1900, I am finding that my reading or re-reading of books from the first half of the twentieth is being influenced by ‘Reading the Twentieth’ Given that the book was published in 1938, it is surprising that there is absolutely no reference to the events brewing in the wider world, although of course the implacable, sociopathic Rebecca, might be a domestic version of tyranny and dictatorship. Du Maurier is I think creating a dark and mythic world here. It is assuredly realistic, not magical realism, yet the at times highly charged language, the implied, destructive eroticism, take the book into a kind of free-floating world of myth, metaphor and sub-consciousness. The only glancing intrusion of politics happens when Max’s sister, Beatrice, imagines that the central crime which the book leads towards might have been carried out by:

a Communist perhaps. There are heaps of them about. Just the sort of thing a Communist would do

I was intrigued to discover, that when the book came out it was pretty well dismissed by the ‘literaries’ – who only saw its populist appeal, and little more. The Times dismissively said “the material is of the humblest…nothing in this is beyond the novelette.” . The novelist V.S. Pritchett predicted the book “would be here today, gone tomorrow”. Inevitably, one can’t help but wonder how the book would have been viewed if the author had been male. Post-feminism, it has been re-assessed by readers and writers precisely with a feminist perspective, in its examination of the power differential between powerful, worldly men, and young inexperienced women.

Du Maurier interestingly wrote this not in her beloved Cornwall, but in Alexandria, Egypt, where her husband, ‘Boy’ Browning, an officer in the Grenadier Guards, was posted with his battalion. She longed for home, and that longing is most powerfully expressed in this book. There was also, by all accounts, a close to home exploration for du Maurier herself, of the powerful drive of female jealousy ‘Boy’ Browning had been engaged before, to a brilliantly dark haired beauty.

Last night I dreamt I went to Manderley again. It seemed to me I stood by the iron gate leading to the drive, and for a while I could not enter, for the way was barred to me. There was a padlock and a chain upon the gate. I called in my dream to the lodge-keeper, and had no answer, and peering closer through the rusted spokes of the gate I saw that the lodge was uninhabited

I will, in fairly short due course, before the wonderful atmosphere of the book begins to let me go, be watching the film on DVD. It will be interesting to compare. I believe (though I can’t quite remember) that Hitchcock went for a less dark ending. 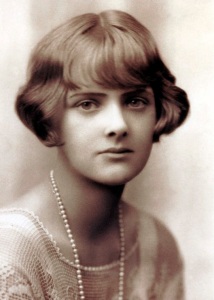 Certainly, du Maurier, in the ‘present’ of the book – most of it involved the second Mrs de Winter looking back at the events of her new married life – gives us a sense of a terrible sterility. The polite forms are observed, and they are used to paper over the chasms of what must remain unsaid.

This is, of course, a properly fabulous book. Perfectly inhabiting genre, and much, much more