For Pity’s sake – Pitfalls and Pleasures

I am sneaking in, just before the castle doors slam shut, and the drawbridge is winched up, on German literature month, co-hosted by Caroline of
Beauty is A Sleeping Cat (I do so agree, Caroline!) and Lizzy of Lizzy’s Literary Life. And here is the page where the magnificent list of books and bloggers who embraced this are listed. I royally messed up my own insertion though! 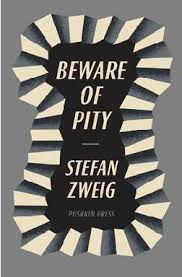 Zweig’s only full-length novel published whilst he was alive – he wrote novellas, plays and poetry – has been on my Kindle waiting for a re-read for quite some time, following my discovery of one of the novellas, The Post Office Girl which I read a few years ago.

And, there are more pressing reasons for my re-read of Beware of Pity – I’m nearing the end of the wretched, (because it won’t be completed) PopSugar challenge One of the challenges was ‘a book your mother loved’ and I knew from the off, that this would be the Zweig. My erudite, multi-lingual mother would have read this in the original German, one of the 5 languages she spoke ‘as native’, though in the end she spoke with a ‘foreign’ accent in each of them. When I was growing up, books, music, philosophy and the arts generally were our dinner table conversations, and Beware of Pity is one I particularly remember. It had been a book which had spoken profoundly to her, and as a reader of pan-European literature, it was one she introduced me to. I kept her abreast of modern English literary fiction, and she brought me to European authors. I read Beware of Pity and found it spoke as forcefully to me as it did to her, so we had good discussions around the subject matter of it

Anton Hofmiller is a rather impressionable, good-hearted, though initially not particularly deep-thinking young man. He is a cavalry officer with the Austrian army, shortly before the First World War and meets a man, Kekesfalva, who fulfils a kind of idealised father figure role for him, a man he believes is a Hungarian nobleman. Hofmiller is invited to a dinner party and dance at Kekesfalva’s mansion, and commits an unknowing wound to Kekesfalva’s daughter, Edith, believing he is behaving socially with great correctness. He invites the seated Edith to dance. However, the once vibrant and active young woman is now crippled through an infection, and has been so, for some years.

Anton’s heart is opened by pity, and he begins to resonate feelingly with the suffering of humanity. Unfortunately, this sentiment, and the desire to spare another from their pain and suffering, leads him to a series of wrong actions, which, though undertaken with the best of intentions, will prove to have outcomes as harmful and deadly as if he had deliberately and wilfully set out to inflict suffering. Having the imagination and empathy to feel another’s pain, ‘pity’ prevents him from allowing the other the dignity of facing the truth.

Hofmiller’s inability to take a clearer, wider perspective, and his tendency to see only a partial perspective of the truth is played with, examined, within the structure of the novel, which begins with a framing device, on the eve of the Second World War:

Hofmiller is now a highly decorated soldier from his history in the First War. He is introduced to a writer, who is as little interested in meeting him as he is in meeting the writer. The two are brought together by chance through a man who obsessively fawns on celebrity. The writer,  (surely a surrogate for Zweig himself) is a little in awe of this hero. United by their mutual embarrassment with the celebrity hound, Hofmiller ends up telling the writer the story which forms the narrative of ‘Beware of Pity’. Zweig, as the author presents the meeting with Hofmiller, and Hofmiller’s debunking of his own supposed bravery, as a foreword to his book, ‘Beware of Pity’. This is already telling us that ‘truth’ depends on where one stands, and that what might be seen, from the observation of actions only, to be one thing, might be quite another, once history, and psychology are understood. And it is no coincidence that Zweig understands psychology, and the divided self, so well – he and Freud had corresponded for some decades, and the interior life, the twists and oppositions between conscience, consciousness and the unconscious and instinctual responses occur all through this book

There also are other ‘storytellers’ within Hofmiller’s own tale : just as Hofmiller disabuses the writer from his illusions, Doctor Condor, the properly compassionate, pragmatic, facing the pain of truth physician, takes part of the narrative within the narrative, telling Hofmiller the story which will force him to see certain truths. It is these ‘truths’ which will unfortunately lead the officer into untruths, in order to protect the Kekesfalvas from the harshness of reality. A formerly disgraced officer, now lauded by the regiment, Balinkay, will also have an educative story to tell, to try and disabuse Hofmiller of some of his illusions.

The book builds inexorably to its conclusion, which is both shattering AND inevitable. The complicated and at times frenzied thoughts and feelings whirling around in Hofmiller’s thoughts had me, at times, with clammy hands, and even feeling slightly nauseous, so much did Zweig’s inhabitation of the confusions of shame, terror, guilt and histrionic panic ring true.

Beware of Pity was published in 1939. Its original German title translated as ‘The Heart’s Impatience’ – also a good one, as it is Heart, untempered by Reason’s ability to foresee consequences, which leads to wrongdoing, despite ‘the best’ of intentions.

The book also became a film, in 1946. I have never seen this, but by all accounts it misses the difficult emotional complexity of Zweig’s novel, which leaves the reader struggling with their own understanding of ‘pity’ and ‘compassion’ and how different the two are, in favour of something more anodyne 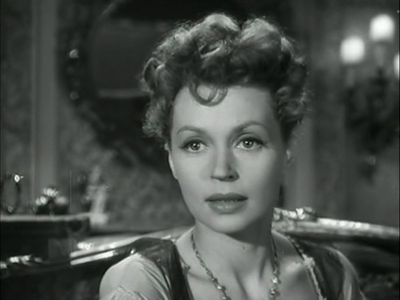 But there are two kinds of pity. One, the weak and sentimental kind, which is really no more than the heart’s impatience to be rid as quickly as possible of the painful emotion aroused by the sight of another’s unhappiness, that pity which is not compassion, but only an instinctive desire to fortify one’s own soul against the sufferings of another; and the other, the only kind that counts, the unsentimental but creative kind, which knows what it is about and is determined to hold out, in patience and forbearance, to the very limit of its strength and beyond

Other themes which Zweig brings to the reader’s attention along the way, which are enormously pertinent to the time of writing, are the bedrock of anti-Semitism extant within the Austro-Hungarian empire well before the start of the FIRST war, and the military structure, not to mention structure within society as a whole, which fostered an absolute obedience to ‘orders’ proceeding from on high. Loyalty, and the fear of letting down and shaming regiment, Army, Empire and Emperor, and, worst of all, peer disapproval, kept unthinking and unquestioning adherence to hierarchy in place. Zweig powerfully shows how such unthinking surrender is a source of easy comfort to the individual. The workings of an individual, questioning conscience and the shouldering of individual responsibility is not an easy road. Another theme is the role of chance itself, in individual lives – this meeting, this sent message, this moment of timing, what are the effects of missing an encounter by minutes, this or that reason why a vital message arrives now, or five minutes later. Not to mention the collision between the fate of an individual and the fate of nations, as our small lives collide within ‘history’

Zweig’s own history and psychology was complex. His books, as a Jew, were of course 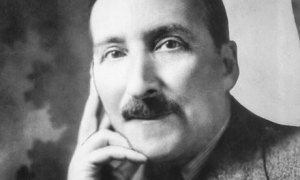 banned in Germany. He had left his native Austria in 1934, as Nazi politics were on the rise. He settled in the UK, later going to America, and finally, Brazil, where he and his wife committed suicide in 1942. During the War he was denounced for not speaking out forcefully and unequivocally against ‘the enemy’ He was a lifelong pacifist. In considering the book, I wondered whether his ability to deeply feel led to an inability to make harsh decisions. Sometimes a want of imagination and too much of the same may lead to haste and simplicity on one hand, and the helplessness of lack of commitment to action on the other

The translation in this version is by Anthea Bell. And if I say I was unaware of the translation that is the best praise, I think, because it implies that the reader thinks they hear the author, not the translator