An interesting book which might not quite reach its deserved audience

Chris Mackey’s Synchronicity is a fascinating look at this phenomenon, which is at the same time not completely satisfying, as, for this reader, its tone means it may well be more likely to appeal to the New Age converted (of which, to a large extent I can surely count myself a member) but fail to appeal to those who could or might be converted by the well argued theory and research to take this book as seriously as it deserves to be.

Some of the information, and, perhaps more, the at times ‘Wow!’ ‘Awesome!’ tone, makes the book appear to come from the scientific equivalent of what might be thought of as the ‘loony left of psychology’ When in fact, the focus is much more grounded and pertinent.

Mackey is clearly a respected and experienced psychologist and therapist. He is a Fellow of the Australian Psychology Society. Fellowships are an honour bestowed on those who are influential and have made positive contribution in their field. An honour, moreover, bestowed by one’s peers. He has worked within a public setting in hospitals, and has his own private psychology practice, and has been working in the field for over 35 years.

He is a passionate, thoughtful, persuasively articulate advocate of what might be called Positive Psychology. Mainstream pharmaceutically based psychology and psychiatry has increasingly become focused on what might be thought of as ‘lesion management’ rather than health recognition. In other words, the identification of the illness, the syndrome, the abnormality of dis-ease. And this generally means a reductionist and biochemical approach to management. The complex politics and organisation of this has been brilliantly explained in James Davies’ Cracked – Why Psychiatry Is Doing More Harm Than Good.

Holistic/Positive Psychology recognises that in every living organism forces of health/wholeness/stability – or the potential to achieve this always exists, as well as the opposite potential to entropy and disorganisation.

Western medicine has a focus around rectifying symptomatic dis-ease – and this is of course a very useful and productive paradigm, but it is not the only useful and productive approach. Other medical systems such as Ayurveda and Traditional Chinese Medicine focus less on the symptomatic analysis of the specific ‘wrong’ and more on what is the whole pattern of imbalance that symptoms are only a reflection of. This does represent a different approach as the pattern indicates the direction of ‘wholeness’ which still exists. A movement away from balance still indicates that relationship with the balance point. In TCM (Traditional Chinese Medicine) deficiency in flow of Qi has corresponding stagnation, excess, blockage.

In the field of Western psychology there are practitioners and theoreticians, and methods, where the emphasis is on understanding that the ‘lesion’, the wound, can be in fact the pointer to the direction in which health and wholeness lie, and that psychic wounds in fact show not only the potential for health and wholeness which is always present, but is the means by which healing manifests. This may sound barking, but, considered simply, it is the breaking of a bone, the wound to the skin, the being laid low by infection which galvanises the complex responses to repair and remodel tissue or to fight infection. Similarly those woundings to the psyche are also calls to where repair, remodelling and maintaining integrity will arise from. Unsurprisingly Mackey, an advocate of Positive psychology, explores the legacy of Jung, Maslow, Ken Wilbur and others, whose approaches have been around the psychology of health, individuation, peak experience and the like. Giving the psyche its weight and place.

Jung’s snappily titled (!) Synchronicity : An A-causal Connecting Principle, defined synchronicity as the connection of two or more, seemingly random occurrences, as not being ‘random’ or ‘chance’ but as meaningful, and common. These could vary from the experience many have, of having the thought of someone enter your head, someone you may not have thought about or had connection with, for some time, and an instant later, the phone rings, you pick up, and it is that person. Or it could be something more symbolic – Jung’s interest in the phenomenon initially being sparked from this direction – a patient told him about a dream in which she had been given a golden scarab (the dream was one which was a highly charged, meaningful one, full of symbols which were potent for the dreamer and the analyst) At the moment the analysand was describing her dream, came a tapping on the closed window in the room. Jung opened the window and an insect flew in – a scarab type of beetle, greeny gold in colour. 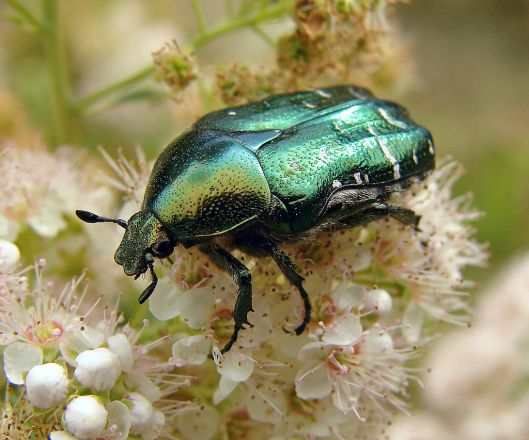 “Cetonia-aurata” by I, Chrumps. Licensed under CC BY-SA 3.0 via Commons.

Jung’s developing idea about synchronicity, which is seen as something of a pointer, something encouraging us towards a noticing, a kind of indication that you are in-the-flow, which Mackay describes as ‘ticks from the universe’ were formed in part out of discussions he had had with Einstein, and had encouragement from another ‘father of quantum theory’, Wolfgang Pauli.

Mackey also explores these connections, and provides some welcome, unflaky breaking the phenomenon away from the ‘spooky-woo’ dismissable. It is specifically ‘entanglement’ which interests him – on a quantum level:

The term ‘entanglement’ describes a relationship between two or more particles, or other objects, that have interacted with each other and then been separated. Bell’s Theorem (physicist John Stewart Bell) hypothesized that two or more such objects would somehow remain connected with each other, functioning as a single system. This mean that any induced change in one twinned particle, such as an electron, would lead to an instantaneous and complementary change in the other, regardless of how vast the distance that separated them

These kinds of ideas and reflections, though echoing many writings found in the New Age section of bookstores – or in long ago written texts on Eastern mystical thinking – are coming from that strange place called quantum physics, and from quantum physicists, trying to find ways to understand some of the phenomena happening at this level

And I must say, that describing all this through the perspectives of rationalising, without the kind of ‘Wow! Awesome!!’ wide-eyedness which often permeates ‘New Age’ books and makes the sceptical, unsurprisingly, dismiss the whole idea as something arising from the relicts of old hippies who dropped too much suspect chemistry in their dim and distant, is very very welcome indeed.

But……….there is ‘stuff’ in this book which troubles, however much I admire Mackay’s honesty about his own experiences. Which are thus : Synchronicity has been something which he has been aware of, in his own life, and usefully stayed open to. He has also, inevitably, in his professional life, attracted patients who noticed synchronicity, or synchronicity became a kind of tool which could be helpfully used in sessions. So there are examples and underlinings which Mackey gives, in clear, and understandable fashion.

What there also is, which increasingly creeps in, is precisely that tone of ‘Wow! Awesome!’ which begins to seem a little off-kilter, a little out-of-balance. And Mackey himself has had experience of ‘breakdown’ – a diagnosis of a hypomanic episode. During this, he was dizzyingly ‘synchronicitous’, and it is the reading of the chapters where he honestly recounts his ‘Wow!’ ‘Awesome’ and the recounting voice (to my mind) has a kind of ferociously over-bright, over-loud ‘Wow!’ ‘Wow!’ ‘Wow!’ quality to it that makes it a little hard to read. He is honest enough to let us know that during this period some of his colleagues thought (and told him) that he was psychotic.

Later, Mackey analyses his own experiences, and concludes he may have fallen into a kind of enlightenment trap – that of ‘psychic inflation’ a sense of grandiosity, specialness (which of course also happens in the ‘manic’ stages of bipolar disorder)

A writer Mackey met on a retreat, very broadly in sympathy with what Mackey has really spent his professional life involved in – furthering Positive Psychology, working with that impulse to wholeness within living organisms, embracing what might be called our spiritual nature, rather than reducing everything about a person to ‘dysfunctional chemistry’ and medication – warned Mackey not to get so focused and caught up in synchronicity. He felt Mackey had become so over-excited by it that he might overlook the ‘fundamental spiritual principles’

Translating that to my experience reading this book, it seems to me that however laudable his honesty about his own experience has been, that it is precisely the over-emphasis on his personal story, told in such a different voice from the rest of the book, which may end up side-lining what is surely an important book which has much to say about the ‘fundamental principles’ of bringing Positive Psychology, humanity, and meaningful, unreductionist ways of treating mental illness, and, perhaps more importantly, fostering and growing human wellness, into wider use. I do feel that it is the over-emphasised weight of that personal story which may lose Mackey a far more useful audience – the unconverted, the sceptical, than this book really deserves. It may not travel much beyond those New Age Shelves. Which will be a shame.

I do recommend it. The fully converted are unlikely to find it controversial, but I hope 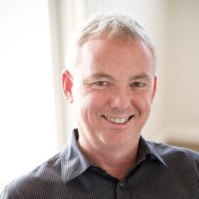 those less convinced might read it for the well-argued stuff.

I received this as an ARC for review from the publishers, Watkins, via NetGalley. It will be published in the UK next month, and in the States also, though with a much expanded title, which rather suggests its self-help market – nothing wrong with that, I just think it might have had a more professionally influential appeal. And perhaps some of the earlier, cooler stuff might not be sufficiently grab-able for those wanting more instructional self-help ‘how to’