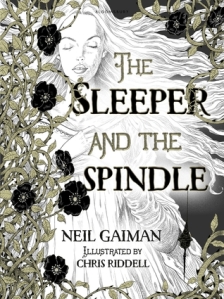 I hesitated a lot about reviewing this here, as it only just makes my 4 star minimum, rounded up from 3 1/2 for the real book only (and a generous 1 star for the Kindle or ebook version). Do NOT get this as an download for a dedicated ereader

Chris Riddell’s illustrations are at least 50% of the delight of this, you will rue the day if you do eread. (I did, and I do) Secondly, this is not really for children – at least not very young ones, its a little too sophisticated and unsettling. I think a child should probably have a 2 digit birthday before embarking. And it may be particularly welcomed by girls due to the strong central character, who is a queen, not a princess and boldly goes where princes fear to tread!

Neil Gaiman’s The Sleeper and The Spindle, is a kind of mash-up hybrid of Snow White and The Seven Dwarves (except that austerity has obviously hit fairy-land too, as we are down to only 3) and The Sleeping Beauty – though there are sly little nods to several other fairy tales which creep in as well – it’s a bit like `spot the fairy celebrity!’ and I won’t reveal them because it would spoil a reader’s enjoyment and `aha’! moments 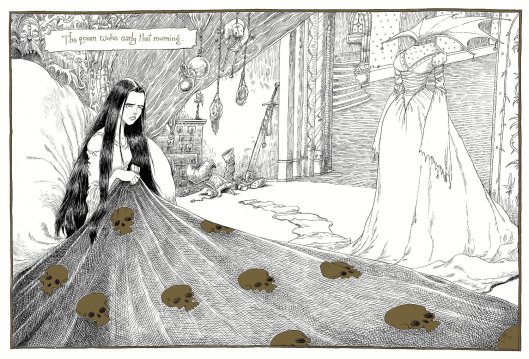 Part of the delight of an earlier Gaiman novel, The Graveyard Book (which I have in paper version) was Riddell’s illustrations, so I was expecting good things with this one. Sometimes illustrations fare reasonably well in the ereader format, but this is not the case here, as Riddell’s style is so full of fine details, which can’t really be seen properly, as if you try to zoom in, to get detail, you then lose the whole. This story (it is a mere 72 pages long, with several pages of illustrations) though full of some lovely little twists and spooky strangenesses, not to mention redundancies of princes, who needs them! – is a moderately long short story, a mere mouthful of a read. It seems overpriced on eReader, purely because those lovely illustrations, black, white, gold, which you can see on the Look Inside, don’t translate into the dedicated eRead format.

Those who are happy to read on other devices, to get colour, and are not bothered by reading on traditional screens, could try a download sample and see if it works for you

The story on its own is probably a little slight; unillustrated, I’d probably have felt a little cheated and wished that Gaiman had published several different shortish fairy tale mash-ups in one volume.

It’s not in the same league, illustration or story-wise with Gaiman’s The Truth Is A Cave In The Black Mountains which was beautifully illustrated by Eddie Campbell, and won a ringing 5 star from me (in real book version) but that was because the illustrations were in full and luscious colour, and far more comprehensively integrated with the text. 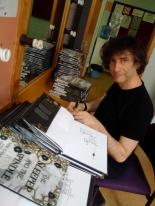 This story has a more technical mix of horror and humour, but is inventive, as Gaiman reliably is

I believe it may ONLY be available on eRead in the States at the moment, with wood book becoming available in September. Wait, Wait, WAIT!