The long, little emptiness of life

Revolutionary Road is as bleak a novel about the mismatch between the hopes and dreams of youth, and the realities of maturity, as any I have read. It’s a novel which breaks the heart to read – not just because of the way Yates makes us feel for his characters, but the way it confronts the reader with themselves. It’s a kind of Everyman morality tale, except there are no gods, there are no demons, there are no solutions. And yet…and yet..this is so far from some kind of nihilistic howl of rage and despair. What saves this, what makes it bearable is that Yates does not condemn his characters, indeed, he does not separate himself from them. Neither does he separate himself from us, nor us from them.

However flawed the central characters are, their flaws are human, and a result of that mismatch between a hope of happiness and personal fulfilment, of individual striving and the long littleness which most of us will inherit. I found myself comparing Revolutionary Road to a much more edgy and hip look at the sense of waste and meaninglessness of a life, a reaction by a more current generation to their version of the American Dream – Bret Easton Ellis, Rules of Attraction. What I loathed about that book was the superciliousness of the writer; we were invited to despise these silly, so unlike us creations, wasting their stupid lives. The genius of Yates (aside from the masterful writing) is that we are brought to care about these flawed, disappointed, bruised characters, because they are us. Ellis was like one of those nasty documentaries where we are comfortably invited to gaze in superiority at car-crash lives, and left smugly above it all. Yates makes us peel off the mask of someone else’s persona, and discover our hurting own, beneath

The central characters, Frank and April Wheeler, see themselves as special, or about to be special, standing outside the mainstream. Frank views himself as ‘an intense, nicotine-stained, Jean-Paul Sartre kind of man’. He is working deep within a soulless corporate, a company making advanced calculation machines – on-the-verge-of computers. Frank sells them, but does not understand them. His workplace is full of corporate clones, but he believes himself different because he mocks them in his head, and consciously wears the mask of being one of them. He doesn’t quite realise they are all consciously wearing the mask and believing themselves different.

How small and neat and comically serious the other men looked, with their gray-flecked crew cuts and their button-down collars and their brisk little hurrying feet! There were endless desperate swarms of them, hurrying through the station and the street, and an hour from now they would all be still. The waiting mid-town office buildings would swallow them up and contain them, so that to stand in one tower looking out across the canyon to another would be to inspect a great silent insectarium displaying hundreds of tiny pink men in white shirts, forever shifting papers and frowning into telephones, acting out their passionate little dumb show under the supreme indifference of the rolling spring clouds. 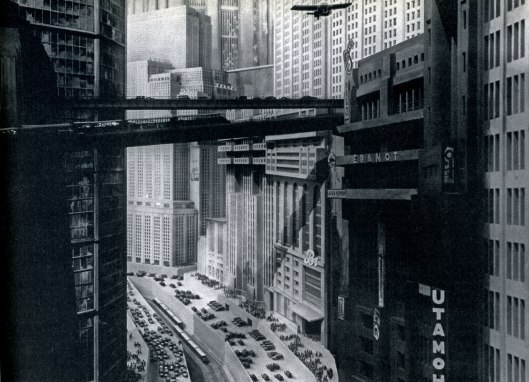 April had ‘attended one of the leading dramatic schools of New York less than ten years before’ She wears this badge as something to set herself as more than the haus-frau she is, having married a man she has told herself (and him) is ’ the most interesting person I’ve ever met’.  Frank believes April is ‘a first rate girl’ almost out of his league. Neither see each other, or themselves, clear, without terror, hatred and rage at what their reality is. Needless to say, beneath the carefully constructed veneer, huge cracks are spreading.

Their closest friends are Shep and Milly Campbell, a less shiny and glamorous couple but one who also believe they are somehow more than cut from a mould. Despite the close friendship, underneath they despise and distrust each other, as couples and as individuals

The elderly real estate broker and her retired husband, Helen and Howard Givings, with the skeleton in a cupboard son, (John is an inmate in psychiatric hospital) give a third portrait of a marriage which is bleak, inside its superficial veneer. Yates offers us the small, lacerating image of the wife who prattles endlessly on in a pretence that everything in the garden is lovely, though his description of her physical life – tell-tale hands twisting in her lap – belie the bright, social manner. Meanwhile Howard sits blissfully, phlegmatically silent, reading the paper. He has turned off his hearing-aid, as is his habit,  and the two are existing in isolation, lacking awareness of each other or willingness to be aware of each other.

Yes, the book, with its inevitably tragic movement shows the bleak underbelly of the American Dream, but it goes far further – it shows the bleak underbelly of the hopeful, growing dreams of ‘being special’ which are part and parcel of adolescence and twenties, and presents the sour regret of maturity for opportunities missed, mistakes made, and the necessary accommodations which most of us will make.

And where can we salvage a true meaning? Is there any hope?

Yates doesn’t offer much – in his view of Frank and April’s parents, and what we see of the potential little Frank and April in their already neurotically developing, vulnerable children, Niffer and Michael, he shows that the previous generation bleakly created the present one, and that the next generation are already struggling hard to please and be whom they think their parents would like them to be, pretending in their turn that the life-garden is full of pretty things, and studiously shutting their eyes to the hard, unforgiving rocks beneath

And yet…………in with the sour despair, there is a wit within the dialogue, the characters play their parts in being bravely ironic for each other – and ARE amusing, and do invite the reader to appreciate their sometimes mordant humour. It’s the mark of a brilliant writer to do this, so that the book is lifted out of unremitting angst. The brittle, sophisticated surface is like some modern version of Restoration Comedy; the knowing wearing of the mask and of the misery beneath play brilliantly against each other. This is both darkly tragic and full of sharp, amusing touches, which makes the reader wince whilst laughing

This is a wonderfully rich book, with a multiplicity of layers and meanings. One of those magical books where the reader discovers that they can go deeper and deeper, and discover more and more, that the craft of Yates’ writing is extraordinary, the images he offers, both economical, subtle, and deep. We are not smacked in the face, instead, small touches, reflected upon, will bring more and more realisations, thoughts, reflections.

As an example, the opening of the book is the staging of a play by a newly formed community theatre group. It is meant to be the foundation of an aspirational, sophisticated, intellectual circle of people who will challenge the status quo, who are more than duped swallowers of 1950s corporate, consumerist, sentimentalised capitalism. The play they are performing is The Petrified Forest, by Robert Emmett Sherwood, later made into a film with Leslie Howard, Humphrey Bogart and Bette Davis. (and even later a TV adaptation) The play/film has as its central characters a writer (Howard) trying to discover the meaning of existence, to find some reason for his being, some purpose, an aspirational artist who feels suffocated by the narrowness of her world (Davis) and someone living on the margins, outside the norms (Bogart) who is the challenge/catalyst.

There are parallels in the lives of the central couple in Revolutionary Road, who are just such a pair, Frank Wheeler, still on the edge of that expansive, excited feeling from youth that he might ‘be something’ and April Wheeler, his wife, whose dreams of being a fine actress never lived up to the reality of the modest talents she really had, but who is feeling that suffocation of the narrowness life offers, as a wife and (reluctant) mother. John Givings, the son of their real-estate broker, an inmate of a mental hospital, brought out from time to time on rehabilitation visits, is the outsider catalyst whose analysis of the Wheelers, his parents, and society at large is the brutal, revealing lamp showing the Wheelers their own reality.

And then, there is the title of that play/film ‘The Petrified Forest’ – a forest is a lovely thing, dynamic, life giving, life creating, endlessly transforming through photosynthesis, sappy, magical – but, when petrified, ossified, it is stifled and stifling. There are echoes of this elsewhere – Giving’s mother Helen, the successful real-estate broker, gives Frank a box of sedum plantings, for the garden he is in theory constructing. It’s an unwanted gift, given at the wrong moment, and gets shoved in the cellar and forgotten. The box is discovered, later, by Helen ‘all dead and dried out’, and she bemoans how ‘a perfectly good plant, a living growing thing’ has been completely neglected.

Revolutionary Road was made into a film by Sam Mendes, with Leonardo di Caprio and Kate Winslet. I can see that this, not to mention the 1936 Petrified Forest Film (and possibly the 1955 TV remake with a much older Bogie, reprising his role, with a luscious young Lauren Bacall) may make their several ways into my viewing.

on this one. First amongst them my dear bloggy buddy FictionFan, whose stunning review of this well over a year ago as part of her excellent GAN quest, finally got this snail (so many, many excellent books, suggested by so many, many of you) over the starting line. I then turned into a dynamic hare of a reader riding on the back of a slow and steady tortoise. Finishing thoroughly as well as with some degree of speed (reading at every opportunity)

FictionFan’s urgings were reinforced by Marina Sofia on Finding Time to Write, and crimeworm Thank you all.