An extraordinary trilogy of hope and despair in thirties London

Patrick Hamilton’s trilogy of bar and street life in London in the late twenties and early thirties, linked by their three central characters, was originally published as three works : The Midnight Bell, in 1929 when Hamilton was 25, The Siege of Pleasure 3 years later, and the final volume, The Plains of Cement in 1934. They were then republished the following year as this trilogy, Twenty Thousand Streets Under The Sky

The novels are drawn in part (or the first one is) from aspects of Hamilton’s own rather destructive life. Although they could indeed be read singly, without reference to each other, and in any order, it is through reading them sequentially that the widest understanding happens.

The Midnight Bell is a West End pub. Two of the bar staff are Bob, who yearns to be a writer and is something of an auto-didact, and Ella, a plain, good natured young woman who is in love with Bob, although she has no hopes in that direction, as she is aware that his considerable physical charms, his wit, likeability and intelligence – not to mention his own intense susceptibility to pretty women, put him out of her reach.

Bob has a growing problem with alcohol, but at the beginning of the novel it is no more than heavy drinking, and there is every likelihood, in his mind, that he will fulfil his literary ambitions, and make something of himself. Ella, the perfect kindly barmaid does not drink, and seems the least damaged of the three central characters. The other protagonist is Jenny, a ravishingly pretty young prostitute, aged 18, whose entrance one evening into The Midnight Bell will be cataclysmic for Bob

(The trilogy was broadcast as a BBC drama the set has been uploaded, in small segments, to YouTube)

The Midnight Bell is Bob’s story, a decline and fall, laid absolutely low by love. As Bob himself is a witty man, this book ripples with Hamilton’s sparkling word play and mordant observations. In fact, for my tastes, the self-deprecating humour, as an antidote to the darkening story, was almost a little overdone. In Hamilton’s later books – most specifically in The Slaves of Solitude, his brilliant and sly humour is much less overt, and instead sparkles darkly and judiciously, rather than `and here’s another funny line’

The much, much, bleaker The Siege of Pleasure is Jenny’s Story. Picking up at the end of the Midnight Bell, when Jenny’s destruction of Bob is almost complete, Hamilton almost immediately back tracks to show how Jenny, who is not consciously wicked, became a woman of the streets. Unlike the destructive, vicious and racketty Netta of his other highly acclaimed novel, Hangover Square: A Story of Darkest Earl’s Court, another stunningly beautiful, completely amoral woman who uses her beauty to part men from their money, Jenny, though absolutely self-obsessed, has a kind of charm and a desire to please. Jenny’s dark destruction is also due to alcoholism. The Siege of Pleasure also seethes with Hamilton’s socialist, egalitarian politics – Jenny is a well-drawn individual woman, but she is also a representative of the unfairness of the class system. The best she can hope for is a life in service, and, at the start of the book, becoming the live-in housekeeper and cook to a trio of elderly siblings, represents a big step up on her own humbler, violent beginnings. Her fall is rapid and its start happens in a single evening. 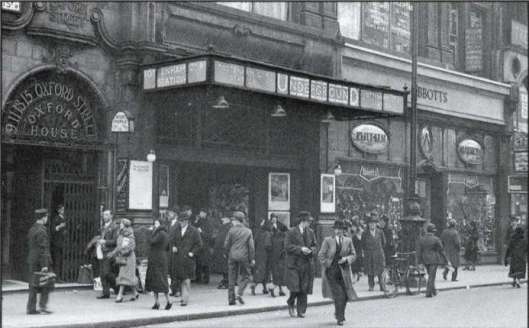 But, for me, the stand-out is Ella’s story, in The Plains Of Cement – London and the area between Oxford Street and the Euston Road, form the bulk of it, though the glamour of theatre land, and the poverty of Pimlico, are also drawn. Ella is a good young woman, kindly, and with a kind of commonplace store of cliché driven phrases, which however come with a homespun innocence from her. She is another with few prospects, and, her only escape could come through marriage, except that she accepts her plainness is unlikely to make this likely. One of the denizens of the bar is a truly irritating, desperately lonely on the verge of elderly bachelor, Ernest Eccles. Eccles is screamingly annoying, the kind of person whose conversation is full of meaningful innuendo which is at the same time WITHOUT meaning. The developing courtship (if indeed that is what it is) is wonderfully handled, and Ella, appreciating Eccles’ good qualities, must juggle moral choices – she has a dearly loved mother, and a hated, bad-tempered stepfather – also working in the bar industry, fallen from almost being a `self-made man’ to a bottle and glass washer. Ella gives half her earnings to her mother; the stepfather is mean as well as an emotional bully.

This again is a bleak book, but it is the writer’s wonderful humour, light touch, fine ear for dialogue, and the internal running commentary of Ella’s thoughts whilst her `out in the world’ external doings and sayings are happening, that makes his work such a delight to read.

The excruciating progression of Eccles’ courtship of Ella, and her frustration, embarrassment and changing feelings towards her elderly admirer, moment to moment, are wonderfully drawn. – here is an excerpt where Eccles is holding forth, but Ella is fixated on the fact that he has a particularly noticeable tooth, which is presently distracting, whilst Eccles is holding forth about his various ‘Funny Little Habits’ of which he is inordinately proud:

‘I mean to say It’s Not Necessary, is it’ he was saying

‘I do think it’s so unnecessary to be Unnecessary‘ said Mr Eccles, getting into slight tautological difficulties. ‘You know what I mean – don’t you?’

‘Yes. I do.’ She wondered if it would have been any better if it had come down straight. Even then it would have wanted the point filed off to get into line with the rest.

‘I mean to say if you’ve got to use expletives why not just use ordinary, decent, everyday words?’

‘Yes. Why not?’ (His other teeth of course were in excellent condition for his age.)

‘I always think it was such a good idea,’ said Mr Eccles, – ‘a fellow I read about in a book. Instead of saying “Damn” and “Blast” and all the rest, whenever he was annoyed he used to say “Mice and Mumps – Mice and Mumps”

‘Oh yes?’ (Couldn’t a dentist break it off halfway down, and then crown it?)

The detailed, authentically delineated Ella comes from the same kind of world as Enid Roach in Hamilton’s The Slaves of Solitude – and Ernest Eccles, though not consciously bullying, in the manner of the obnoxious Mr Thwaites in that book, is equally a boor, insensitive, solipsistic and insufferable in his pomposity. Hamilton writes from inside his central female characters utterly believably.

The autobiographical basis for the first novel in the trilogy came from Hamilton’s own love affair with a prostitute, and his own alcoholism. His father, too, was an alcoholic, an unsuccessful writer, and made an early, disastrous marriage to a prostitute. Out of his own dreadfully destructive nature and nurture Patrick Hamilton created finely crafted literature. Alcohol, and its potential for destruction, as well as its ability to create a rose-tinted world, runs through all three books, as does the various ways in which capital exploits labour

In the end, despite the humour, the storyline, the well drawn characters, and the

marvellous journey of 3 novels sequentially, which can be enjoyed as solo outings, it is Hamilton’s depth and humanity which grabs me, every time. His touch may be light, and have at times an almost Restoration style comedy of manners going on (the trajectory of the courtship between Eccles and Ella) – but light, in Hamilton’s touch, is never limited to the superficial, and he has an enviable ability to whisk aside the surface, and leave the reader heart-clutchingly aching as they engage with, not only his central characters, but ourselves. He is some kind of witness to the lives all those who are not the explorers who discover continents, the astronauts who step on other planets, the rulers of nations, but those who live inside the ordinary dwellings, the denizens of those Twenty Thousand Streets Under the Sky

15 thoughts on “Patrick Hamilton – Twenty Thousand Streets Under The Sky”