Sombre Film With A Rather Old Fashioned Feel : but then, so are Rabbinical Divorce Laws

Viviane Amsalem, an Israeli woman, wants a divorce, as she and her husband are not compatible. She has lived apart from her husband for 3 years. Unfortunately for Viviane, this is Israel, and the `Get’ or divorce ruling, can only happen if the husband agrees to the divorce. And Viviane’s husband does not want to release her

Shot entirely in soulless official hearings rooms and waiting areas, this is a claustrophobic film, with a trio of powerful performances from, particularly from Ronit Elkabetz, as Viviane Amsalem, Simon Abkarian as her stone-faced brooding, implacable husband Elisha, and Menashe Noy as Carmel, Viviane’s fiery, impassioned lawyer. Sasson Gabai is equally excitable and prickly as Elisha’s advocate, brother, and upholder of traditional rabbinical values.

The divided couple, both deeply suffering, one wanting her freedom, the other savagely unable to let her go `she is my destiny’, despite the fact that both leak hard suffering through their association in every glance, givw wonderfully internalised performances, electric with seething, restrained bitterness. The advocates roar and gesticulate, with fiery expression.

The film misses its final star, for me, because a few of the `star turn’ witness performances are a little too much bravura character comedy `we need some laughs here’. And though we certainly do, at times that dialogue and some of those performances are a little too obviously `play this for laughs’ and verging on caricature. Performances for the stage rather than film. Oppressive though the film and its subject matter is, a lighter touch on the `breathing space’ moments would have better kept the integrity of what the film is about.

Though the dreadful rigidity and wrongness of the system is clear, what is well done is that the husband is not played as a pantomime villain by Abkarian – he performs the role without commenting on it. It is a truthful, restrained performance which means that Elisha makes sense to himself.

Elkabetz is a multi talented woman, as she co-directed and co-wrote, as well as starred in this.

Her powerful pressure-cooker performance eventually and agonisingly explodes as the film reaches a dreadful climax and the final images had me out of my chair with shock and disbelief. Skilfully done. 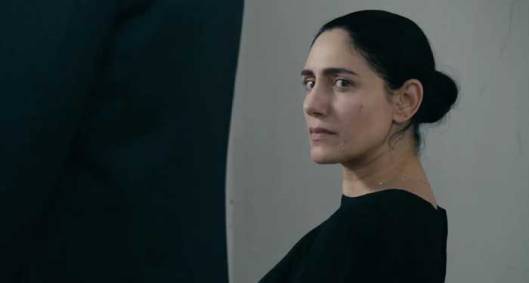 This film is Israel’s entry as `Best Foreign Language Film for the 2015 Oscars.

In filmic terms, it has no whistles and bells, no fast cutting, soundtrack et al, and has nailed its submission to issue and performances.

Costumes are almost unremittingly black and white (!) throughout, pre-and-post credits and titles against a heavy red background. Sudden appearances of colour in clothing are shocking, as if we have forgotten light, shade and nuance could exist at all.

I received this as a review DVD from the Amazon Vine programme UK. The film does not yet appear under the above name on Amazon USA. Maybe it will be retitled.

4 thoughts on “Gett : The Trial of Viviane Amsalem”