Vegetarians, Vegans and Raw Food Eaters can happily frolic through these pages. Others are also welcome. Five Yums Rating!

Bez is, as he tells us, not a chef, but he is from Italy, loves food, and works in ‘creative’. He is also a father, and cares about eating fresh, in season, delicious quality food. And he has limited time for lunch, taken at his desk. He has chosen the option to prepare a variety of fresh salads, which can be quickly put together in less time than it takes to queue in the local supermarket for a sad sandwich

His art director background is written all over the great presentation, and excellent design of this book.

The recipes are divided into the four seasons, and what is easily available. Some of it involves being a little thoughtful the night before, and cooking a few extra vegetables, grains, pulses (or, okay for those of you that eat the other stuff, putting aside some of the dead flesh) to become part of your lunch salad.

Forget lettuce, tomato cucumber; tomato, cucumber lettuce; cucumber tomato, lettuce and on, and on, Bez will have you happily assembling all sorts of goodies, – I advise a quick ‘look inside’ the book to whet your imagination, but a few recipes I flicked at random – yellow pepper, broccoli, chilli and coconut cream; goat’s cheese, kale, cucumber and tomatoes; cavalo nero, avocado and sprouted beans.

I can hear those flesh eaters grumbling………….fear not, there is plenty for you. What Bez does is to define each recipe as being Omnivore, Pescatarian, Vegetarian, Vegan or Raw.

Obviously the omnivore is for the everything including animal eater , the pescatarian fish eater and the rest, the vegetarian has nothing which had a face, but does include dairy or egg., the vegan contains no ingredient from an animal – and the raw will always be an option which is not only vegan but had no heating applied – so for example, it could include sprouted pulses, but not cooked pulses, as protein source (he doesn’t include sushi in raw, it belongs, properly, to pescatarian)

And for those on the most restricted diets of all (the raw food eaters) there are a lot of recipes! So this lovely book gives options for all

Not only are the recipes themselves tempting and delicious, but I particularly love the THOUGHT which Bez has put into it. You can search yourself a recipe in different ways…the index helpfully will give page numbers for, for example, Vegan Main, Vegan alternative and the like – and there is the search by ingredient. Got some pak choi you want to use up? No problem.

Bez ‘deconstructs’ the layers of his salad, so every recipe will have a base (generally a salad leaf, but it might be a grain, 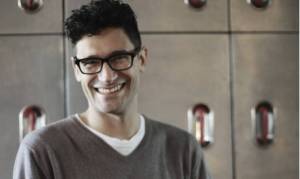 then vegetables and or fruit, a protein component, toppings – nuts, seed, and the like, fresh herbs, and finally the dressing – which might be vinaigrette style, pesto style, or creamy style – some 25 varieties of dressing.

And if you run out of ideas and need some more he even has a salad blog called Salad Pride, where you can tiptoe through the garden gathering more goodies for lunch and breakfast! (from which site I have cut and pasted some hunger inducing pics)