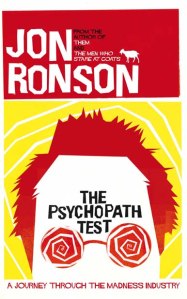 Well written and engaging; could have gone so much further

Jon Ronson is one of those investigative journalists who gets down and dirty with his subject matter, rather than taking himself out of the equation and writing with a overview, an all-seeing eye which suggests ‘objective truth’ Of course, the writer will always have an opinion, and be part of what is being observed, whether they make that subjectivity overt or keep it covert.

The initial premise of this well-written book starts out looking like something far-fetched from The Celestine Prophecy – a mysterious manuscript which has been sent to various academics, one of whom asks Ronson to investigate where it came from and what it means. These investigations lead him into looking at the sort of personality which might be inclined to want to manipulate others, and quite quickly he gets drawn into that journey, looking particularly at psychopathic behaviour, what a psychopath is. Most of us probably consider psychopaths to be people who commit horrific crimes such as rape and murder, but as Ronson discovers, there is a continuum in reaching the diagnosis, and there are many ‘normal’ people in society, who do not rape and murder, but nonetheless have certain character traits and behaviours which may be part of the check-list of a clinician who is trying to ascertain ‘is this person a psychopath?’ Ronson’s journey takes a look at some of the history of psychiatric medicine – including some of the excesses of the anti-psychiatry movement of the 60s and 70s, and the backlash of overdiagnosis and that checklist of the DSM – Diagnostic and Statistical Manual of Mental Disorders. There is also the teasing throwaway that though psychopathic tendencies may exist in about 1% of the population at large, there are a statistically larger number of these ‘members of the general population’ with psychopathic tendencies to be found as CEOs of major organisations. Makes a horrid kind of sense really, given the cultivation of ruthlessness which seems to be required, fostered and encouraged in programmes like ‘The Apprentice’

Ronson making his own journey a central part of this exploration of mental health and psychopathy in particular, has both great strength – but also weaknesses. The strengths are an immediacy of having an engaging, articulate, witty companion as your guide, as you read the book, who asks some of the questions which you, the reader might have, as you try to gain some understanding of what a psychopathic personality might be. The weaknesses are that there are interesting questions raised,which don’t really go anywhere, and he doesn’t really follow through with them. Such questions as: what ‘normal’ is; why both ’empathy’ and its lack, might exist; the strengths and the weaknesses of having an ‘artist’s’ view of mental health (analysis, therapy, allowing the story/the gestalt of a person to happen ) versus the scientific/statistical ‘observed’ presentations of the DSM. There’s a teasing nod to this in his account of a partial conversation with his friend Adam Curtis, the documentary film maker, who is critical of the direction Ronson is taking in his investigations for this book – looking at how inevitably the investigator gets drawn into investigating the ‘on the edge’ peculiarities, the weirdly extreme, so that the investigator (and the reader/viewer) can feel safely superior, without really looking at aspects within oneself. I probably wanted Ronson to be closer to Curtis, and to look more at what all this means for society at large – how the attempt to over-diagnose mental illness has led to a flattening of what it means to be human, a tighter and smoother and more conformist view of ‘normal’, and mass medication, via the pharmaceutical industry, of normal, human variation. Perhaps the difference is that Curtis is a man with an agenda, and Ronson may not be. Curtis’s libertarian stance may give him a certain blinkered vision, but it also brings focus and cohesion. Ronson is more scattergun, not quite following through.

advantage – for example, within certain branches of medicine. It strikes me that the surgeon, if he or she allowed themselves to really engage with the pain and suffering of the patient, might be too overwhelmed to make that healing incision. There are professions where the fostering of empathy is crucial – nursing for example, and professions, like surgery, where it is most helpful if a certain ability to ringfence, or even inhibit, empathy is present