The Ministry of Fear is Within as well as Without…….”.If one loved one feared “ 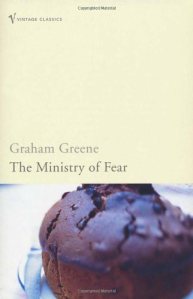 Even a Greene novel written before he flowered into his middle and later period of novels about more metaphysical and existential concerns, and described by him as one of his ‘For Entertainment’ novels, is a master-class in how to combine a page turning thriller with stunning psychological nuance, interesting character, believable and immediate time and location setting, and the darker waters of ‘what it means to be human’. (which is always what I am most aware of with Greene)

The Ministry Of Fear, published in 1943, could be regarded on one level as a propaganda novel – beware, look out for ‘The Enemy Within’ and, like the equally page-turning, jolly-good-read A Gun For Hire, is a dazzling example of how to do pot-boiling with something much more substantial, and much less just formulaic, a-bubble in that pot.

This was a very pleasurable re-read for me; Greene is a writer I do return to, and can always find new, and more, to engage with, whilst sinking into the comfort of knowing the narrative journey, subsequent reads give more time to enjoy the view.

In brief, Arthur Rowe, a man with a fatal flaw – pity, an inability to bear either his own, or another’s suffering – and how this is a flaw for him (and others) will be revealed – visits, by chance a fete in war-torn London. Immediately we are in Greene-land – the complicated, thoughtful, damaged and introspective hero, walks back into the golden memory of childhood safety, the sweet remembered goodness of a golden age – and discovers this is only patina, there is no safe space. Chance, the perfidy of fate, has brought him an encounter which was never meant to be his. He wins a cake in the raffle which is somehow linked with espionage for Germany. And the whole plot proceeds, from here, tying Rowe further and further like a fly caught in a malevolent spider’s web of ‘only connect’ as the sticky threads of connection proceed for ill, rather than for benevolence. 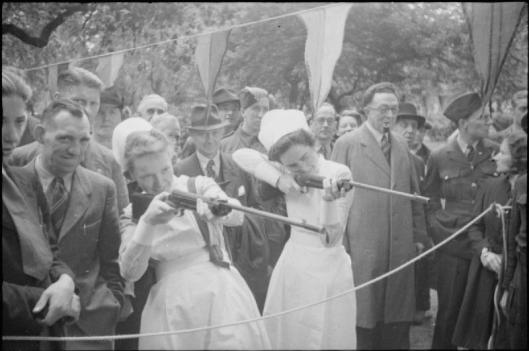 Typical Greene that plunges the reader into perfidy and betrayal, not through espionage in high places, with sophisticated protagonists, but through the most prosaic surface of little, local England, peopled with kind bobbies and paternalistic vicars.

He rips the surface away, and builds, right from the start, the creeping growth of fear, and nothing to be trusted. As a kind of comment on the world he leads us into, are small excerpts as chapter heading, quotes picked from a book by the Victorian writer Charlotte M. Yonge, called The Little Duke, which Rowe picks up second hand at the fete, as part of that romantic golden glow misremembered simple world of childhood. Yonge wrote ‘homilies’ for the young, about high ideals, simply expressed. Greene’s characters yearn to achieve those ideals, but are spotted and stained by the complexity of living in the real world, where morality is not always so clear

A murderer is regarded by the conventional world as something almost monstrous, but a murderer to himself is only an ordinary man – a man who either takes tea or coffee for breakfast, a man who likes a good book and perhaps reads biography rather than fiction, a man who at a regular hour goes to bed, who tries to develop good physical habits but possibly suffers from constipation, who prefers either dogs or cats, and has certain views about politics.

Happiness should always be qualified by a knowledge of misery………..Knowledge was the great thing…..not abstract knowledge, the theories which lead one enticingly on with their appearance of nobility, of transcendent virtue, but detailed passionate trivial human knowledge…….One can’t love humanity. One can only love people

This book positively sings with all manner of……’now I really need to reflect on this’….all delectably wrapped up in a page-turning espionage plot which positively suggests a Hitchcock noir film.

In reality, The Ministry Of Fear was turned into a film by Fritz Lang. I have not seen the

film but the fact that by all accounts it had a jollier, Hollywood wrap ending completely misses the point of Greene’s book, where even the obvious wrap which we might see coming from fairly early on, is nuanced by the sour sadness of accommodation and compromise. High ideals are rarely achieved with full untarnished glitter, there is always, ‘in real’ a spot of wear and tear, a small stain which is pervasive.

5 thoughts on “Graham Greene – The Ministry Of Fear”