Uncomfortable, hilarious, poignant and musical is the brew

This Coen Brothers film, about the burgeoning folk scene in the early 60s had me wincing, laughing, and absorbed for its 90 minutes. The film opens in Greenwich Village in 1961 at a precise time just BEFORE Dylan burst onto the scene.

Llewyn Davis (an excellent performance by Oscar Isaac) is an utterly self-obsessed, careless, narcissistic musician. He is however a man of talent, self-belief, and creativity. And also laziness, prickliness and melancholy.

So the nub of the film is the self-obsession and belief which the artist MUST have, if they are to be putting their creative vision out there – married with the fact that the person themselves may not be particularly likeable. We (the consuming public) half forgive the often careless and badly behaved artist if their WORK touches us.

The Coens present us with this – in many ways Davis is a rather unlikeable human being, careless of everyone else’s feelings, tender of his own. At yet, there is a curious vulnerability about him which is attractive enough to allow him to use people, because they see something in that vulnerability which they want to protect, not to mention a sense that what the artist creates may be much finer than the artist himself. So, as that fineness of creation is IN the artist, this means they must, surely, be a better person than they appear to be. Well, that I think is the theory that has artists forgiven for what would be unindulged behaviour in non-artists.

Maybe we do believe, unlike what Orwell says, that an artist IS a special kind of man!

Davis stumbles through, journeying from New York to Chicago and back, in pursuit of fame and fortune, insulting people wittingly and unwittingly, coercing his way into places to stay, meals to be fed – and making at one point a terribly wrong decision around a recording session which the audience knows will sting. Davis is careless and selfish, sure, but he is also gauche and possessed of a certain gullible innocence – he both exploits and IS exploited. 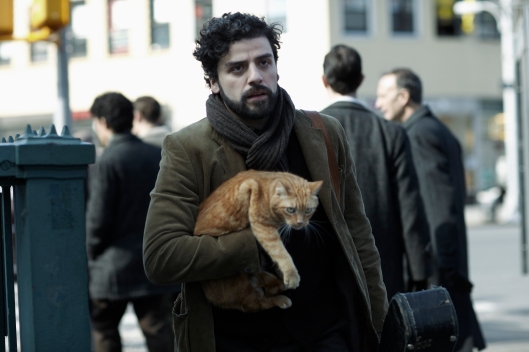 I’m sure I’m not alone is also rooting for the parallel ginger cat story, one of those wonderfully real Coenesque eccentricities, which left me, as a cat fancier, wondering and worrying about one development. (can’t say more, spoiler avoider)

Llewyn Davis’ has a Dylanesque musical style and voice, and indeed Oscar Isaac has some of that intense street-waif sexiness of the young Dylan, as in the album cover of the Freewheelin’ Bob Dylan, and there is almost a sub-text of ‘could this be a version of Dylan’. There is a neat barbed moment around this in the film, which had me wincing and laughing in equal measure.

With a great musical trawl through, in terms of live performance and soundtrack music, this was a thoroughly enjoyable film

Other performances of note in the film are the sweet faced, sweet voiced, foul mouthed and angry character played by Carey Mulligan, John Goodman as a fairly obnoxious jazz musician and Garrett Hedlund as Johnny Five, a beat poet, in the road/Chicago section of the film.

The 40 odd minute ‘extras’ have a certain rough-cut charm, probably particularly to musicians.

I have one small criticism of the sound quality of the spoken material, which seemed unusually quiet and muttery from some of the performers, so I had to have the volume turned up beyond normal levels to properly hear much of the dialogue.

7 thoughts on “Inside Llewyn Davis”