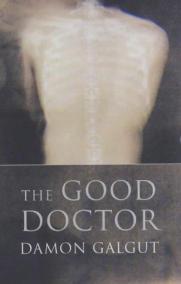 South African writer Damon Galgut writes spare, cut to the bone prose, crafting books inhabiting bleak, uneasy territory, peopled with characters of some moral ambiguity, adrift in a world they improperly understand, and fail to completely engage with, often with shocking and disastrous consequences. Graham Greene is an obvious comparison.

This novel, The Good Doctor, is set in post-apartheid South Africa, in what was one of the designated Bantu homelands under apartheid.

The central character, Frank Eloff, is a doctor working in a hospital deep in the middle of nowhere. The hospital has been an administrative creation, and is not viable, financially, or in terms of need, as it is too far from any centre of population.

The small team of mainly white doctors, the single African `nurse’ (not really qualified) are washed up and marking time in different ways. Initial idealism and good intentions have run dry; Eloff particularly has the intelligence to self-reflect, and a certain honesty about himself, but he lacks the drive, commitment or indeed the passion to instigate purpose and change. Part of what the book uncovers is his back history, and his complicity in an event which destroyed his innocence and sense of himself as `good’. From this arises the present failure of purpose, and a sense that meaningful change could occur

Waters has asked to be posted to this nowhere, as he wants to blaze trails and do good. Forming an almost puppyish friendship for the world-weary Eloff, Waters’ rigid sense of purpose and morality both creatively revitalises and devastatingly destroys the complex relationships within the hospital, and the community it is supposed to be resourcing.

Galgut’s bleak view of the impossibility of relationship untainted by hidden agendas is best illustrated, thus, in an early conversation between Frank and Eloff

“Everything is politics, Laurence. The moment you put two people in a room together, politics enters in. That’s how it is”

The presence of the vast, indifferent landscape, always threatening to overwhelm

mankind’s endeavours underlines and feeds into the knowing despair which is the fabric of this book.

Yet, uncomfortable though this book is, in many ways, it is a read I recommend. Galgut’s writing has its own stark beauty, and the bleak view is presented without self-indulgence, without sentimentality. Writing untempered by illusion.