The excellent YA author Marcus Sedgwick, whose novels often take old myths and legends, and examine them in a more contemporary setting, with modern sensibilities, has taken the same approach in this, his first adult novel. Which is about vampires.

I must admit the vampire/werewolf/zombie fashion is one I more or less avoid, so overworked and overpopulated does the genre appear to be, and a novel about people, with no need for acquaintance with stakes, silver bullets and the like, is my preference.

However, this is a novel by Sedgwick, so I expected a more interesting variant on the well-worn theme.

And so it proved.

Do not expect the supernatural. Although there may be a couple more coincidental meetings than one might hope for, in order to create story, feet are firmly on the ground, bats no-where in evidence, and the un-dead never a consideration.

However, what we do have (not a spoiler as it is the publicity for the book) is a young doctor, Charles Jackson, a member of the Royal Army Medical Corps, in Paris during the dying days of the second world war,  seeing the shocking, brief, sight of a man apparently drinking the blood of a woman he appears to be murdering, or have murdered.

This horrific sight possibly changes the course of  Jackson’s life, and stunts it, on many levels, as his panicked reaction haunts him, about the choice and choices he made as a result. Possibly changes, because as the book unfurls Jackson learns things about his own nature which are uncomfortable and horrifying.

He embarks on a twenty-five year journey to come to terms with what he saw, and to find the man.

This is a gripping page-turner, which, being Sedgwick, goes deeply into the mythology of why we have an obsession with the genre anyway, and what it is that speaks so powerfully, alluringly and fascinatingly about the connections between sex, death and life-giving blood.

Jackson becomes a doctor who specialises in haematology. A close friend has specialised in working with the psychologically damaged. So…..rather than the Hammer-Horror vampire, there is psychopathology to repel and attract Jackson. There is also quite a lot of academic exploration into myths around blood – including the powerful rituals of Christianity – another of Jackson’s academic friends is involved in that more mythological field, and in literary and artistic interests in the subject matters 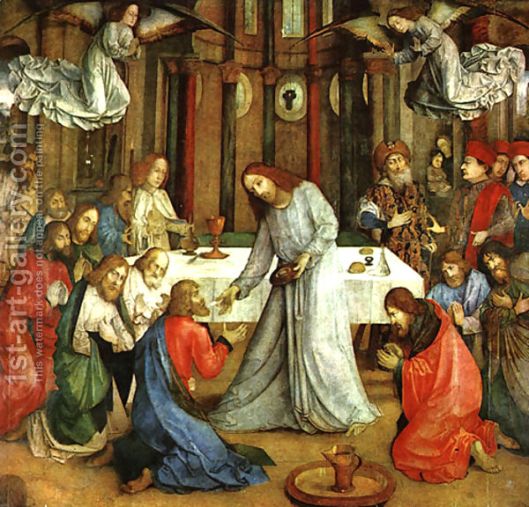 Joos van Ghent, 1474: The Institution of The Eucharist

I particularly like the fact there is little obsessive gory detail in these sometimes blood-splattered pages. Sedgwick is a fine enough writer to trust the reader’s imagination – he gives us some gore but let’s OUR imaginations paint the picture as red as we like or don’t like!

Charles Jackson is an ordinary, likeable enough man, and, perhaps, had he not seen what he saw, would have had an ordinary, likeable enough life. But………was he tainted and spoiled, or was the spoil within him? This is in the end a journey of more than one kind of obsession, and more than one kind of desire. There are lots of oppositional pulls within this story, including that satisfying one of just-who-is-hunting-whom. Not to mention why, no, REALLY why?

And the book kept me awake – it wasn’t that I was afraid to turn out the light, it was that I couldn’t bear to turn it off, before reading just one more chapter.

I had a slight disappointment, with the very final page, and might have preferred a slightly different ending, removing a couple of penultimate lines. A red pen moment itched!!

A terrific take on this genre, saying new things

thought it was way too long, you really should like this (310 pages) Sedgwick manages a good balance between page turning plot and theoretical and academic investigations.

I received this as an ARC from the Amazon Vine Programme. It will hit the widely available shelves and ereaders on March 27th