More quality from BBC Scotland (and Happy Hogmanay, to one and all, given the date of this posting!) 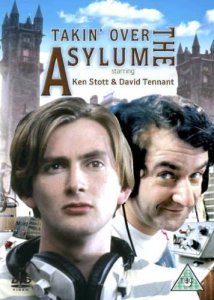 Well, I’m SO pleased David Tennant achieved great fame as Dr Who, as undoubtedly it was THIS which caused the long overdue release of this wonderful 6 episode series to DVD. I was gripped by this when it was broadcast, (20 years ago now) due to the marriage of a wonderful script by Donna Franceschild, and a chock-full batch of brave and gritty performances. Franceschild had previously written for some of the small scale political theatre groups. She manages social content and a serious message whilst using all the tools of entertainment skilfully.

The young David Tennant is brilliant in a large, on the edge of going over the top but never doing so, performance of a young man with Bipolar disorder. The performances which really hung in my memory over the years though were the always wonderfully complex Ken Stott – here as a bruised, messy, alcoholic – in many ways less sane, outside the asylum, than some of the inside the asylum characters, particularly, much less sane than the intelligent, tender, witty performance by Angus McFaddyen, as the schizophrenic Fergus (this is the second performance which stayed with me) – beautifully restrained, full of depth, breaks your heart – and then there is the achingly vulnerable Katy Murphy as lacerated, self-harming Francine. Ruth McCabe is beautifully low key as a woman with OCD and there’s even a delicious performance by Elisabeth Spriggs, looking eerily like a fatter, older Meryl Streep as Stott’s Lithuanian grandmother.

At the time, the series won a BAFTA for best series, and Franceschild an award for her wonderful script, so the release to DVD was well overdue!

Cracking drama, inventive, great soundtrack – it’s set in a hospital radio studio, after all, sparkling humour, and break your heart painful emotions. Like life, there are winners and losers in the story lines, and there’s little which would satisfy Hollywood in their endings, but they are RIGHT.

You can even watch episodes on You Tube – annoying cut up into several sections, but maybe watching Episode 1 Part 1 will whet your appetite for more